We must really all be Keynesians now. Bailout Nation has gone global, with central bankers coordinating money debasing, fully believing that what they can cover up insolvency. But we know better. Any system that needs to be subsidized is a system that shouldn’t exist in the first place.

Based on that idea I’m adding a new short this week to the Revolution Investing portfolio, Apollo Group, Inc. APOL -0.34% . Apollo operates several for-profit colleges but by far it is most readily identified as the owner of the University of Phoenix; out of its ~400,00 students, nearly 90% attend a Phoenix branch. You probably know that for-profit education companies have faced headwinds of late but I believe Apollo presents a particularly compelling bet on the ultimate collapse of the industry.

If you’re looking for an x-factor as to America’s success in the 20th century, its higher education system is a pretty good place to start. We have a decline in manufacturing, a rising welfare and an increasingly financial-ized economy, but it is without question that our universities are the envy of the world. The research at American universities has been a big driver of the increase in quality of life and technological breakthroughs. So it follows that the American Dream is a college degree for the kids and owning the home you raise them in. And it’s this Dream that the for-profit industry preys on.

At this point you know the story of the subprime loan inside and out; a mismatch in supply/demand plus low interest rates spurred price appreciation, and seeing the values of homes, buyers & lenders took on more risk with increasingly large debt levels. But the parallel to the for-profit industry is clear and actually far more nefarious than most realize. Shifting demographics through the 80s & 90s led to millions of 18 year olds that in previous generations would have joined the labor force to attend some kind of college. This in turn led to an overwhelming of the public college system, eventually spilling over into community colleges being packed. So naturally the government stepped in.

Beginning in 1991, federal government education loans grew from a quaint $40 billion to $140 billion today. Where did the 300% growth in spending go? Almost entirely to the for-profit education industry. As suburbia spread and the parents took out loans on the future value the houses they couldn’t afford, brand new colleges to educate their kids sprang up, sometimes in strip malls, sometimes buying failed colleges wholesale. And the kids, on the advice of the guidance counselors in fancy new high schools funded by the real estate taxes from fancy new McMansions, registered for classes in droves. To pay the tuition they followed their parents lead, taking on debt from government & private sources, effectively borrowing from futures earnings, which would supposedly be improved by attending a newly invented college. 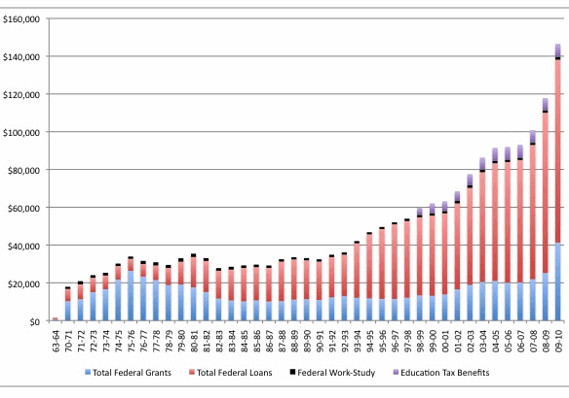 But here’s why the kids are not OK and student debt is worse than housing debt: it can’t go away. In 1998 Congress declared that student debt could not be discharged in bankruptcy. This means that federal student debt, along with debt from criminal acts & debt from fraud, was no longer forgivable and follows a person virtually no matter what. Private lenders got the same kind of protection in 2005.

With student debt now such a weighty matter you’d think the federal government would take extraordinary efforts to make it as manageable as possible. No such luck. Instead of managing the loans themselves, the feds followed its lead in the housing market and created implicit and explicit guarantees on the loans, directing them through private lenders at significantly higher rates. So when a lender originates a federally backed loan, whether the student pays it off or not is of little consequence to them; the taxpayers are on the hook no matter what, there’s no haircut or workout process.

The colleges where this debt is going in the form of tuition have an interest in signing up more and more students, so is it surprising they’ve mimicked the housing industry to increase the number of consumers coming through the doors? After building campuses for 4-year degree students, the for-profit industry began cutting corners, just as housing lenders did with loan standards. Soon they were selling 2-year degrees, part-time degrees, vocational certificates, job training programs and online test-prep. Layer on a student loan GSE system, much like Fannie & Freddie, shoveling loans to Wall Street for securitization, and its obvious why student debt levels have exploded. The growth in the cost of homes and CPI is nothing compared to the increase in the cost of college. 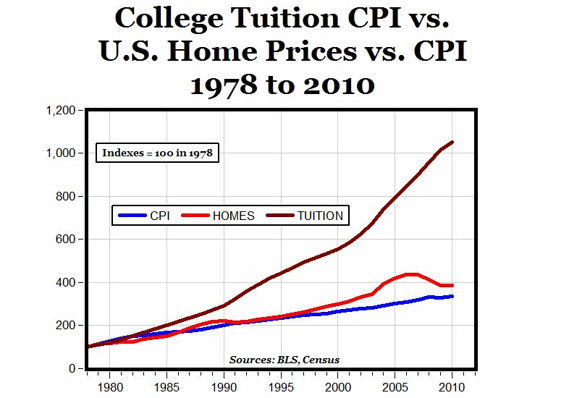 If it weren’t for the financial crisis this may have gone on unquestioned for quite a while. When these students, now with debt loads often in the six-figures (which would buy a previously seven-figure house) and unable to get jobs, began pay later and later on their monthly obligations (up to 70% of students have missed at least one payment according to the Department of Education) the politicians took notice. But instead of scrapping a system of colleges with accreditations that employers don’t fundamentally believe in, the debate became about how to tweak things. The solution Washington came up with was to threaten to revoke the funding of colleges whose students don’t get jobs at an arbitrary rate at an arbitrary salary. Under this the outcome the best that can be hoped for is federal tax dollars to create a kind of social class of vocational guilds. Like Italy.

The proposed solution (Department of Education): 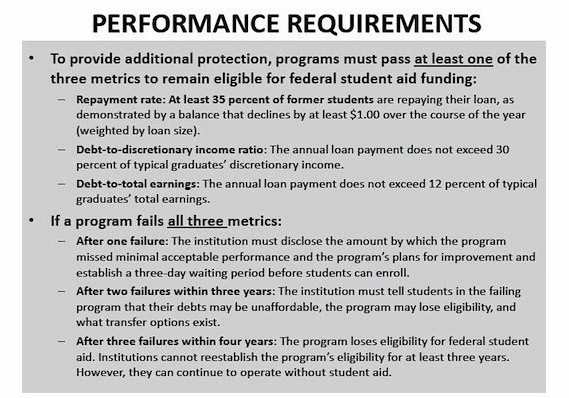 But even that didn’t happen. The for-profit industry rallied its allies in Congress and made the regulations toothless. Emotional appeals of working mothers going back to college and minority students became the new line in the ad-campaign (never mind that crushing debt loads have been particularly devastating to minority students who often don’t graduate as a result). With the risk of defunding off the table, the stocks of for-profit companies have rallied this year, even with a down market.

If you get the parallel to the housing collapse then here’s why you should short Apollo specifically: it’s the Countrywide of for-profit education companies. The ubiquity of its commercials for Phoenix harken to those Countrywide ones that urged you to refinance while the getting was good. While it’s sitting near its 52-week high, enrollment has slid 25%, much like Countrywide, whose loan quality and cash flow was declining long before the stock did.

Most strikingly is that with the rebound in Apollo’s stock price, the founder, John Sperling, and his son Peter have been selling shares this year (not included in the sales are the 51% of the voting stock that gives them total control of the board).

I’m looking to start buying long-dated out-of-the-money puts in this name and shorting some common too starting tomorrow.