Flip It. It’s a concept that I created when I was learning to invest that is all about looking at the news, the trades, the analysis, and everything else completely upside down from what you’ve been taught. When the economy is rosy, and everybody thinks it’s a no-brainer to be long stocks, the markets will always be at highs — you want to Flip It and sell. When the economy sucks and everybody thinks it’s nuts to invest in stocks, the market will be always be at lows —  you want to Flip It and buy.

When the mainstream media is freaking out about Greece, it’s probably time to Flip It. Other examples of Flipping It from recent months include:

Two months ago when the markets were at highs, I wrote over and over about how important it was to be taking some off the table and to prepare for the next market downturn (See:  Make the hard trade).

When the markets were down because Greece was in the headlines and Apple had sold off and we were getting a chance to buy it and a lot of our other stocks at much lower prices than they trade at right now, I wrote about how Apple’s market cap was bigger than Greece’s entire economy (See: Apple is bigger than the entire Greek economy).

All of those are classic examples of Flipping It.

So once again, what’s in the headlines for the last week or so, driving a sell-off in the markets? 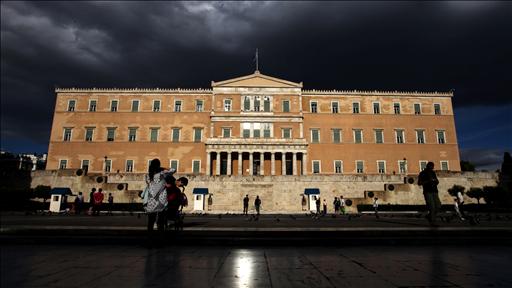 Greece hits a wall: Matt Kaminski, a member of the Wall Street Journal editorial board, on the failure of talks to form a coalition government in Athens.
• Do-over elections reportedly set for June 17

Pressure builds on Greece
Equity benchmark in Athens gyrates as Greeks gird for repeat elections. The big bourses diverge: Paris is up while Frankfurt and London trade lower.
• Some Greeks pull their bank deposits (WSJ.com)

Berlin will have to blink

The Germans are talking tough. But when it comes to the crunch, they will have little choice but to deliver a Marshall-Plan-style package to keep Greece in the euro, writes Matthew Lynn.
• Bank of England raises inflation outlook

And I can tell you that I’ve been inundated with panicky emails and chats asking if we should be selling or hedging because of the CRISIS IN EUROPE and GREECE. Go back and look at those articles above — the time to sell and hedge because of the Crisis In Europe and Greece was when the markets were at highs and Greece wasn’t in the headlines. In fact, as you guys have seen, I’ve been buying into this decline and want to get more aggressive on any further EU/Greece-induced weakness.

Feet to fire, how’s the near-term for Greece and its place in the EU and these new elections about to play out? Read this analysis from Greek living through all this in Greece, from Bruce Krasting:

Athens – The results of the May election are in conflict with the people’s desire to stay with the Euro. The people voted in anger. They voted against those they had voted for in the past. Now they see whom they have elected.

Every day on TV the extreme right is interviewed. They are Nazi’s. People are frightened by this. On the left you have Alexis Tsipras (Syriza). This man is an uneducated thug. The people understand that. They don’t want this man to be their leader.

When the next election comes, Greeks will not vote in anger and they will not vote for the idiots on the fringes. The centrist parties will rebound. A National Salvation Government will be formed.

The entire political and financial systems of the US and the EU have been corrupted and these seemingly endless shell games of kicking the can down the road can indeed go on for much, much longer than any mainstream pundit or any rational investor would think they can. There’s little reason to believe that any new “centrist” or mainstream political party can solve these issues without reinstating rule of law by prosecuting all past and present corporate/banking fraud and stopping all forms of the wildly unsuccessful QE/bailout/bank-welfare programs that they keep pushing. In the long-run, any and all rule of law brings confidence and prosperity to the economy and society. But when the pendulum does start to swing back towards rule of law and less corporate welfare, the markets will likely freak out, just as they have recently with Greece’s seeming move away from “centrism”. I’d be terrified of both the “Right” and the “Left” parties in Greece too, as defined right now by their leadership, which the above Athens dude is calling “Nazism” and “Uneducated Thug”.

But the takeaway here is twofold. One, you always want to look at Flipping It in your trading and investing analysis. And two, there’s a good chance, as outlined above by someone in Greece who’s been dead right for a long-time about how the Greece situation has played out, that Greece is about to shock the world by moving right back into the “Centrist”, mainstream political and financial parties that the stock markets will embrace.

And if you can start scaling into more long exposure while the markets are down 7% from their recent highs just as the catalyst for that sell off is likely to reverse in a shocking the world kind of move that the stock markets will rally on…well, that’s probably something we all should be looking for as traders, no?

There will be lots of new pitches...
Growing up with civilization's entire knowledge base at your finger tips
Amaris turns 2, Bubbles beget bigger bubbles, Not giving into the pressure
Join Cody For A Cryptocurrency Zoom Call
How About FIVE Trader's Thoughts of the Day