Dr. Doom Nouriel Roubini says the “perfect storm” scenariou he forecast for the global economy earlier this year is unfolding right now as growth slows in the U.S., Europe as well as China.  In MayRoubini predicted four elements–stalling growth in the U.S., debt troubles in Europe, a slowdown in emerging markets, particularly China, and military conflict in Iran-would comes together to create a storm for the global economy in 2013.

Funny thing is I agree with all of those points  but not the implicit conclusion to not own stocks.  Yes, no one has ever lost money investing in property in China.  Yes, the new normal of  overall U.S. economic growth is < 3%.  Yes, you know I think that at some point the euro unwinds and yeah, there’s a crazy person in charge of Iran.And with all of that dominating the headlines every day, seven Dow components have hit all-time highs this year.   American Express & Johnson & Johnson are getting closer to their all-time highs, which would make it nine.  Venture capital raised almost $6 billion in Q2, housing in 84 metro areas improved and Campbell Soup just paid $1.55 billion for a refigerated juice company.  There is good news a-plenty from disparate parts of the economy and you want to be a buyer of our Revolution longs when the market and pundits ignore that.  Heading into earnings I anticipate more options trades to take advantage of volatility, kudos to the TradingWithCody and Cody Word readers who picked up more Apple AAPL when the stock was below $600.

I want to highlight some news that portends well for our bet against Apollo Group APOL. Via Reuters:

(Reuters) – Bridgepoint Education Inc (BPI.N) was unexpectedly denied an accreditation for its university, threatening the for-profit education provider’s ability to attract students for its programs.

The company’s shares fell as much as 34 percent to a 20-month low of $14.24, making the stock the top loser on the New York Stock Exchange.

The accrediting body noted that the university spends a nearly a third of its money on recruiting students, which is far more than what it spends on faculty, student services and academic support.

We’re at the beginning of the death spiral of most for-profit educators.  I’m looking at the fall semester for a nasty drop-off in enrollments across the board.  Would you want to take on debt for college classes when the college might not exist next semester?

The mantra ‘Don’t Fight The Fed’ these days means ‘Don’t Bet On Market-Set Interest Rates’ so I’m closing our short position in iShares iBoxx High-yield Corporate bond fund HYG.  It isn’t making any money for us and I don’t want it as part of our portfolio. It’s been a good ‘hedge’ for us to be betting against crappy companies borrowing money for free, but we’ve been waiting too long for the shoe to drop and I don’t want to wait anymore.  Here’s something I wrote about HYG back in March of last year:

“Corporate, junk, private equity and bank borrowing costs are all at historic
lows. But at some point, borrowing costs for these firms will head back to market-based
levels, which if you look at what it costs small firms and consumers to borrow money is
probably a closer gauge of what’s coming.

This fund will drop if borrowing costs for corporations rise. And I do expect that over the
course of the next two, three, five years, that the subsidies and money pumping into these
giant corporations (that mostly end up cutting jobs as a result of the acquisitions that this cheap money is financing) will ebb. And their costs will rise.”

My view has not changed; it’s that the world has been lulled into believing that rates will never rise again.  Heck, friends of mine who don’t know anything about LIBOR or sovereign borrowing costs are buying assets that get them any more than the big fat zero a savings account pay.  And when J.P. Morgan and Goldman Sachs turn away investors searching for yield, you know things are wacky. But that doesn’t matter, being a good trader is as much about cutting emotional ties as financial ones, and I don’t want HYG sitting around on our ledger when we could be investing cash in platform.

The real money I’ve made in my career as a hedge-fund manager and now a simple trader just like all of you, is when I’ve bet on huge, enormous, walloping, secular-trends.  I was breaking it down to an enthusiastic member of my research team, just how brutal stock picking is.  Counting on the market to realize your genius is truly frustrating, and you can get the DCF and accounting analysis right just to have a CEO come out and tell you all the numbers are fraudulent (see: me and Nortel).  When most investors quote Warren Buffet’s value investing philosophy they focus on his habit of getting a good price, but they ignore that he doesn’t just buy anything that’s cheap, he wants to be on the right side of history too.  Being right about a growing market, where the companies involved are disrupting traditional dynamics and can steadily increase earnings, is crucial part of your margin of safety.  And that’s why I’m adding a 3D printing name to our Revolution portfolio.

If you own a Makerbot (or are eyeing one like I am), you already know what I’m talking about.  For everyone else, the concept is pretty simple.  In manufacturing you start with a material, a block of something, and whittle away to make something new. But now comes the “Flip It”. In 3d printing the opposite happens, the material is squirted out and layered to match a digital description of what it should look like.  That’s it.

I want to be long 3D printing because it is a Revolutionary enabler of human capital and will disrupt the manufacturing value chain as we know it.  Professor Olaf Diegel of Massey University lays rather out pretty eloquently:

“The whole purpose is customisation and trying to avoid waste,” he says. “It’s the next big thing in manufacturing, because you can create to order and modify the design to suit specific individual requirements, whether it’s for a new set of teeth, a door handle or a piece of jewelery.”

The value chain for any small manufactured part is incredibly bloated and has become overly reliant on cheap labor, which is rapidly disappearing.  3D printing lives in the open source world.  If you need a new knob for your car stereo, you’ll be able to select one from plenty of freely posted industrial designs, download it to a 3D printer, and get it on demand.  Consider what something that simple would disrupt: your local Autozone store, the shipping and logistics companies like UPS that get the part to that store, the real estate and capital needed to hold inventory, the tool and die manufacturers that make parts to make those parts, and the local auto mechanic who hopes you skip all of that so he can just mark it up to you.  There are going to be 3D printing & fulfillment operations in every city in America and I’ve already seen a couple good business plans trying to do just that.

We already own Autodesk and their software is going to be used increasingly for small scale manufacturing.  There are three other names in the space, and we’re buying one of them for the Revolution portfolio today.

The one I want you to steer clear of is Protolabs PRLB, because they just aren’t agnostic enough, and I don’t even know why they get mentioned in the 3D space. I’m only mentioning them because I’ve heard way too many people who should know better conflate what they do with 3D printing.  PRLB is focused on rapid prototyping and selling parts over the internet.  It’s traditional manufacturing but on-demand and online, with the customer uploading plans (probably made on Autodesk’s Autocad).  Cool business model but not a revolutionary platform.

Stratasys SSYS is much more what I’m talking about, the founders, Scott and Lisa Crump are 3D printing pioneers and they’ve built the company for the last 22 year (thing my research team heard most often talking to people in the 3D industry: the Crumps are “awesome”). They just merged with another industry giant, Objet, which I think could add almost 25 cents to the 93 EPS SSYS has right now. Stratasys has a market cap of about $1.12 billion and trades for around 7x sales.

The stock I really like and they one we’re buying is 3D Systems Corporation DDD, which has boomed 80% over the last year.  This name is going to be volatile but a stock being up big should never be an automatic disqualifier.  Digging into the financials and I think they $260 million DDD has in revenue right now should triple in the next two years. And most retail investors and fundies will disqualify DDD for trading at 55x earnings but the number they should really consider is that 3D Systems trades at a not-unreasonable 33 EV/EBITDA.  Plus I think analyst estimates are way too low for next quarter, I’m looking for about 40 cents of earnings vs. the average of 28 cents.  And I think a big kicker that few are focusing on is DDD’s revenues from the healthcare market.  Here’s a slide from an investor presentation in April (PDF): 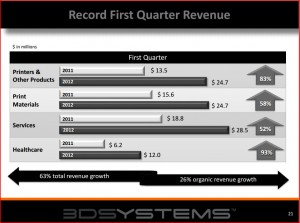 After talking to several hospital administrators and buyers for hospital groups I think that $12M could very easily double again in 2013.  Earlier this year DDD’s printers won Class VI certification, which means they can be used to produce medical devices.  For a quick example there were almost 3 million hearing aids sold in the U.S. last year at an average price of $3000.  That’s $9 billion in sales, and you better believe that every piece of the medical-industrial-complex wants a bigger piece of that pie.  That’s the exact promise of 3D printing, disrupting traditional giants in the manufacturing value chain, and why I want to own DDD. Starting with just some common stock.