Green Day. And I’m not just talking about the band whose leader lost his cool in a big concert a couple nights ago thereby helping juice sales of a just-happened-to-be-upcoming new album. Nothing in the mainstream media is ever what they say it is. For stocks or rock stars, you gotta look past the headlines.

Green day – I’m also talking about the markets this morning. Tech leading the way back up after a mostly ugly day yesterday. The market feels to me like it’s about to lock itself in bit of tight trading range for a bit — consolidate that is. And then we’ll see how the set up looks for the next big move.

Google’s just unstoppable move higher continues too. Look at a chart of that stock from when I was loading up on common and calls back in April when the markets were in panic mode over Greece and Spain. Remember that?! Anyway look at this chart: 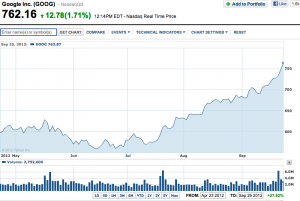 I’ve trimmed down along the way up and I’m sitting tight for now, but if you haven’t trimmed yet, but I’d suggest locking in some of those profits at some point. Have your cake and eat it too that way.

No trades for me today so far.

And a warning about the video. Billy Joe drops some serious cuss words, so don’t watch if that offends you.

PS. Ever notice how similar these two songs from Green Day and Better Than Ezra really are? Listen to the beginnings back to back. Same chord structues, almost the same beat, similar melodies.

Green Day – When I Come Around [Official Music Video]