The markets are up huge in the last three months.  Check out this chart of the Dow and the S&P 500 via BigCharts.com:

With stocks up so much I’ve been reducing the weighting of my longs on TradingWithCody.com (a service not affiliated with MarketWatch, where I detail my trades in real time).  And I’m really quite happy that I’ve been getting so many emails about my shorts, any time the market goes up this much this fast your spidey senses should go off.  But don’t just go out and short any stock that’s been going up.

It’s always, always, ALWAYS best to short companies that are fundamentally in trouble, not just to bet on momentum swinging the other way.  When you get both together, that’s the sweet spot.  Finding outright frauds are the easiest short trade to stomach, even if it runs against you, because you can be almost certain the market will catch up.  Think Tyco $TYC and HealthSouth $HLS.  After that comes companies that can change but the change is going to be painful so management might not do what’s necessary.  Genworth $GNW just said that it would rather be downgraded by Moody’s $MCO then to get it’s balance sheet in order.  Pretty dumb for a life insurance company if you ask me.   And I like shorting companies that exist solely on government welfare or government cover-ups; that’s what I shorted A123 Systems $AONE and Lender Processing Services LPS in the Marketwatch Revolution Portfolio.  This is pretty tricky timing-wise because the government and welfare payroll can stay solvent longer than you can.  Which is why I always look for a catalyst in these scenarios.  With LPS it was the recognition by the legal system that robo-signing was real and was a billion dollar mess.  In the case of AONE the welfare just stopped flowing.

Then comes the bulk of shorting, the companies that are on the wrong side of history and major secular trends.  I picked out twelve of them in my book on stocks to short, “The Dirty Dozen”.  I like to focus on huge multi-decade trends because the market doesn’t appreciate just how badly everything that stands in the way will be wrecked.  Imagine if you could have shorted gas lamp  manufacturers the year before Thomas Edison and GE $GE introduced the lightbulb.  More contemporarily here’s what Barnes & Noble $BKS has done since the introduction of the iphone:

If you had bought the first iphone and realized the implication that all reading content was going digital, and that bookstores on their way out, you’d be up about 70%.

So how does this apply to Staples $SPLS??  Long-time readers know that I don’t care much for the two-party system; the only real beneficiaries are the networks that take their money and run their ads (CBS $CBS is up 71% over the last year).   But my ears perked up when I heard this speech in support of Mitt Romney from Staples co-founder Ted Sternberg:

Today Staples employs nearly 90,000 people. It has over 2,000 stores. Over 50 distribution centers. It is part of a competitive industry that helps entrepreneurs and small businesses get started on their own. For me, as a founder, it was the realization of a dream.

Sternberg was doing a little #humblebrag but I wouldn’t be so psyched if I were a Staples shareholder.  Staples disrupted the previous generation of office-suppliers by doing something radical: creating a retail presence.  Before that most companies, even small ones, had to find office supply distributors (like The Office) to get what they needed to do business.  Romney and his pals at Bain & Co.  interviewed the managers at small firms and realized they were spending their whole time finding printer ink and pens, not on actual business.  Here’s what Staples did in the ten years after their IPO: 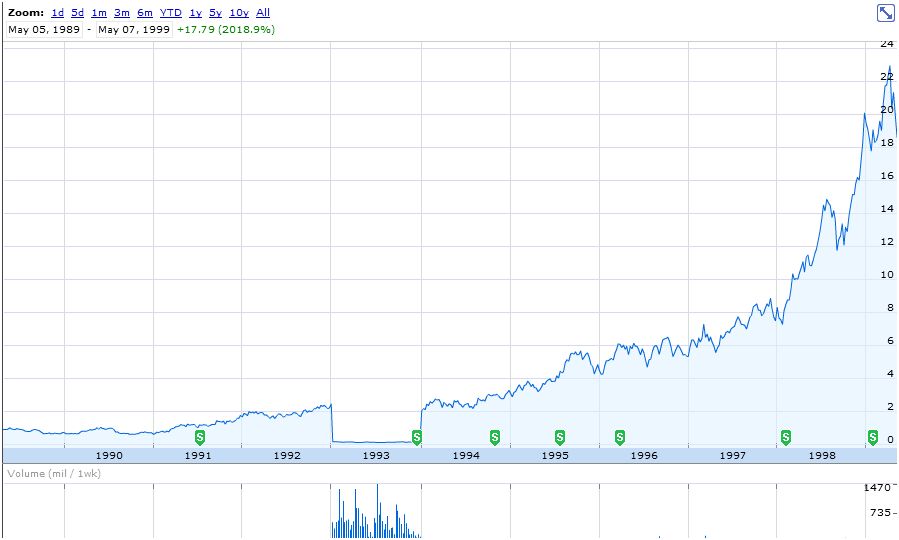 Romney and co nailed that trade.  But in 2012 do you really need 90K employees to hawk low-margin office supplies?  50 distribution centers?  The enormous cost and liabilities of having a retail presence in every single market in America?  Staples along with OfficeMax $OMX and OfficeDepot $ODP are fundamentally over-leveraged in the era of Amazon $AMZN.  I’ve been talking to purchasing managers at small firms and what they tell me is that Amazon subscriptions for office supplies are easy to manage and significantly cheaper.  Yes, local office supply stores will still exist but the footprint has to shrink.  Those stores will be for last minute purchases, not the bulk of what a company buys.

Which is bascially what Staples admitted this morning:

Staples Inc. is speeding up store closures, shaking up management and boosting its online business as the office-supply chain implements a multiyear plan to cut costs. The Framingham, Mass.-based company is looking to save $250 million, before taxes, by the end of fiscal year 2015. At that point, Staples said it intends to have shaved down its retail square footage by 15%.

Staples already does significant business online, about 40% of revenues, but that other 60% will be really difficult to replace.  They’re taking a $35 million charge to close 30 stores this year (surprisingly, landlords Simon Property Group $SPG don’t just let you walk away from leases).  They want to close 15 of their 1800  North American stores in the next three years.  That’s 225 stores.  Let’s say that it’s a million per store.  That’s $225 million cost upfront, a loss of $600 M in revenue and a cost savings of $250M per year (these numbers are ultra-rough).  So as they are trying to transition to the way-more-profitable online business, their revenue will be going off a cliff and the costs upfront will be bigger than the cost savings.  And forget the Europe and Australia operations, those are just a mess.

But I’m no McKinsey consultant and Staples does run their business pretty efficiently.  Free cash-flow-looks strong and maybe a business school wunderkind can do some operational/financial magic.  What they won’t be able to fix is that office supplies as a category are in permanent decline.  This is a cloud and tablet and paper free world.  We’re already there and all those trends are only going to get bigger. You don’t need to highlight anything on an ipad.  You don’t need a 3M $MMM post-it for your iphone. Five years from now I predict that copier sales will be a fraction of what they are today.  Here’s a Morgan Stanley $MS slide on paper usage since the introduction of the ipad:

I have no position in Staples at the moment but there’s isnt much for stock holders to be hopeful about.  That is unless Mitt Romney loses the election; then I bet he revises his 2011 tax-return to take the whole deduction, rejoins Bain and takes Staples private.

Fused markets
Meet me in LA for the Apple Investor Summit in March (And a few thoughts about the stock's action la...
Trade Alert: What About Valuations
Some incredibly important Revolution Investing trends we should pay attention to
Ugliness lurking underneath the indices and bitcoin update