You know what surprised me this morning? The fact that there are no panicky headlines out there today despite the fact that markets are down 10% in the last month and down again this morning. Isn’t this the time in the playbook that we’d expect to see the mainstream media freaking out about the Endless Euro-Debt Crisis and the Fiscal Cliff (capitalization throughout intended).

Here’s a snapshot of the WSJ.com this morning as I’m typing this. 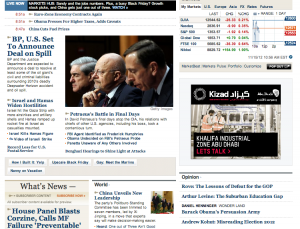 And here’s the FT. 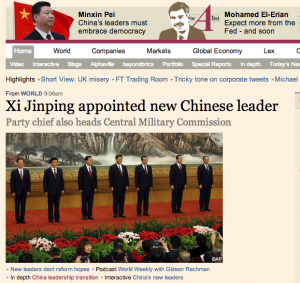 And even the meta-news at Yahoo! Finance has absolutely nothing panicky for us this morning. 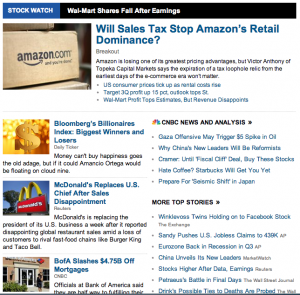 The lead story is that BP and US arrive at a fait accompli deal that’s been priced into the markets and BP for months if not years already? Internet taxation at Amazon? What is this, 1999? And but one minor mention citing Jim Cramer about the Fiscal Cliff and it’s a bullish article with stocks to buy in it?

Where the hell is the panic this morning?

Last time I asked “Who’s More Scared Right Now, The Bulls Or The Bears?” it was early November and the reading came in at a still less-than-extreme 75% bulls and 25% bears. I had thought that the bulls were getting panicky and that perhaps we were finally approaching a 90%-plus “Bulls are more scared” reading, but until we get the panic in the headlines feeding the fear of the bulls, I’m not sure we can really put in another major bottom as we have every single time the markets have pulled back like this over the last four years.

In the meantime, while we’re waiting for the panicky headlines to hit, let’s ask again — “Who’s more scared right now, the bulls or the bears?”

No trades for me today. Apple’s slow bleed of death continues — can you believe it was at $350 earlier this year though? I’m waiting to add the next tranche until either the slow bleed of death stops or until we get a major capitulation by the longs on a single day’s decline of say 3% or so, if that were to happen.

We need to let the markets, the economy, sentiment and our analysis of all three of those things weigh on our trading decisions. Great Bottoms (caps intended again) come when the markets are down big (check), the economy for corporate America and thusly earnings are growing (check with the caveat that the growth has slowed markedly) and when sentiment from the bulls is terrified (Are we there yet? Answer the poll), the bears are cocky (been a while since the bears were actually cocky, huh?) and the headlines are full of explanations and reasons for the panic to continue forever (the lack thereof being the topic of today’s column).

The upshot is that we don’t want to let our wishing for a bottom to color the fact that not all the elements for a Great Bottom are here quite yet. And let me know what you think — “Who’s more scared right now, the bulls or the bears?” by answering on the site, emailing us at support@tradingwithcody.com, or just hitting reply if you got this columned emailed to you from us.