Do you have a beautiful smartphone in that beautiful house with a beautiful wife? Odds are, if you don’t now, you will soon.

By 2016, IDC sees nearly 1.2 billion smartphones sold each year around the globe, nearly double today’s level, which is already more than double the number sold in 2010. 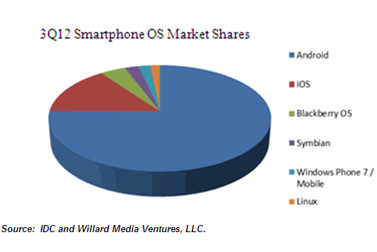 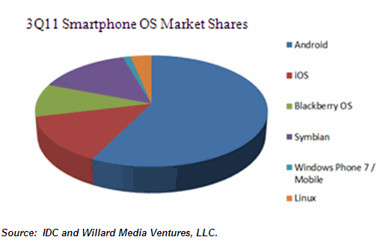 The Google-Apple duo of Android and iOS accounted for an incredible 90% of the smartphones sold in the latest quarter, with 75% going to Android (thanks largely to Samsung’s powerful momentum). Apple’s iOS accounted for about 15% in the period, better than the 14% share it had in 3Q11, but down from the 19% share Apple had in 2Q11.

Together, the dynamic duo is running away with the smartphone game. That 90% combined share was up from 85% just one quarter earlier, and dwarfed the 66% combined share for Gapple in 2Q11. Meanwhile, also-rans like Research in Motion RIMM +1.20% , Nokia NOK +0.34%  and Microsoft MSFT -0.07%  are seeing their share of the smartphone operating system market erode rapidly — combined, the three accounted for just 8.6% of shipped smartphones in the third quarter.

There were actually more than 100 million Android-based handsets sold in the latest quarter — that’s more than the total number of smartphones sold for the entire year in 2007, when Android was introduced.

Microsoft is reportedly in talks with Asian suppliers to try (again) to develop its own smartphone. A similar effort in 2010 (the Kin) was an embarrassing failure, but Softie has been making tiny gains in share with its Windows 7 OS, and Windows Phone 8 smartphones are coming to market this quarter.

RIM has delayed its Blackberrry 10 launch until next year and just keeps losing share — Blackberry OS devices accounted for nearly 10% of the market in 2011 but are down to 4.3% in the most recent quarter.

And Nokia, which is still a major player in terms of global feature phone sales, is no longer in the top five for smartphone sales. Sales of Symbian-based phones are likely to end in 2013 as Nokia focuses on its Microsoft partnership.

So, how did we get here? And what does it mean for our portfolio?

A review of research and development efforts tells a big part of the tale. We first looked at these trends back in 2010 and our investments in Apple AAPL +0.14%  and Google GOOG +0.26%  have performed well since then — even after the market’s recent trouncing.

Apple has increased its R&D spending by an average of 33% annually through the end of last year; over that same time the company’s operating cash flow has grown a whopping 62% each year. In fiscal 2012, which ended in September for Apple, R&D rose another 39%, to $3.4 billion, and OCF grew to nearly $51 billion.

In other words, Apple generated about $968,000 in cash every minute in the past year. And spent just 9% of that cash to invest in the future—well below anyone else in the list. Apple’s ability to invest so little and earn so much is no doubt tied to the company’s extraordinary platform and the efficiencies that come from developing a slew of products that complement each other and work together.

There isn’t another company out there that can claim the same, although both Google and Microsoft appear to be trying to work toward that model — Google with its buy of Motorola’s handset business and Microsoft in its most recent talks with Asian manufacturers.

Google’s R&D grew by 24% over the five year period through the end of 2011, while its operating cash flow grew at 26%. This year, Google had to deal with the losses at its new Motorola division, but we’re confident Google can fix what’s been wrong at Motorola and bring the line to profitability.

At the other end of the spectrum, you see RIM with a rapid ramp up in investment since 2007 — but the company was slow to realize that it was being surpassed by the likes of Apple and Android. Now it’s playing catch up and much depends on the relative success it can achieve next year with the Blackberry 10. Finally, Nokia clung to its Symbian OS for far too long and has seen its OCF — as well as its share price —plummet.

And at the end of the day, that’s the point folks. When you smooth out the gyrations that come from general market malaise or euphoria, equity value and share price follow the trends in cash flow. Apple’s and Google’s are growing with their investment in the future, and there’s no reason to think that will change. Remember, smartphone sales are going to double again by 2016 and these two companies control 90% of the market.

We’ve been adding some calls in Apple over the past two weeks as the market has tanked on broader global concerns about the economy, the Middle East, etc. But the Apple retail stores are still among the busiest out there. Ho! Ho! Ho!

One of our biggest shorts, LPS is in big...
Be realistic, Square, small caps
Making some moves with my MSFT position
TradingwithCody Chief Guide Elad Ryba on: The future of entertainment
Prepare for bad times when the markets are at all-time highs