Regular readers know that I sold my position in 3D Systems last month after several well-researched articles were published that questioned the company’s reporting of its revenue growth in the wake of numerous acquisitions. There’s just too many questions about their financials for me to mess with it anymore.

I don’t mess around with accounting irregularities (anyone remember Enron?  WorldCom?  Yeah, me too), so we sold our DDD position.  That said, I’m still very intrigued by the overall potential of 3D printing in general (check out the picture of a 3D printed car, the Urbee, below—how cool is that?), so today we’re taking a deep look at DDD’s largest publicly-traded competitor:  Stratasys, Inc. 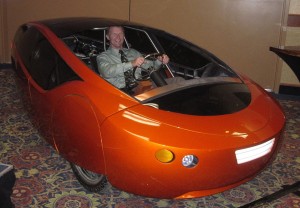 Just last week, SSYS closed on the acquisition of Israel-based Objet.  In the press release, company chairman Scott Crump said:  “We are pleased to announce the successful completion of this merger.  With our breadth of products, commitment to innovation, and outstanding, service-focused team, we will be well positioned to address customer needs across the entire 3D design and manufacturing spectrum. The combined company has a deep well of talent and a strong board and management team to lead us successfully as we continue to pave a new way forward for the 3D printing industry.”   Sounds good, right?  Apparently investors “sold on the news”  because the stock tumbled $5/share, from $75 the day before to $70.

At yesterday’s $72.31/share closing price, SSYS is up 119% year to date, and it’s up 75% since the merger with Objet was announced April 16th.  Following such an awesome run, it’s no surprise that the valuation is high.  Adjusting for about $58 million in cash that Objet brings to the table (neither company has any debt), SSYS’ enterprise value is presently just over $2.7 billion and there’s $3.50/share in cash.  Revenue next year should be at least $435 million, which means the company is valued at 6.3x forward revenue.  Earnings—and both companies are net income positive—will approach $2/share next year, for a hefty 34.4x forward earnings multiple.

In and of itself, a 34x forward P/E isn’t a deal breaker.  We own Amazon after all, and it has a triple digit P/E ratio.  In a relatively young industry like 3D printing, such multiples aren’t unusual.  The question then becomes, how quickly can SSYS grow those earnings, and thus is the valuation warranted—or not?

To answer that question, we scoured analyst reports and forecasts for the overall growth in the 3D printer business worldwide, took all the numbers, backed into a few, and averaged the projections.  Based on our research, here’s our estimated forecast of annual sales in 3D printers: 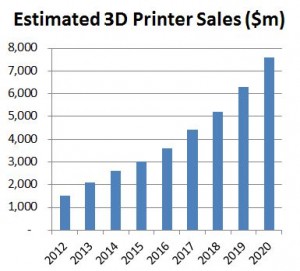 So, from around $1.5 billion this year, the consensus is that worldwide sales will top $7 billion by 2020.

Now, 3D Systems, which has been the most aggressive consolidator in the industry, is expected to do about $439 million in revenue next year, for a 21% global market share.  Stratasys’ $435 million estimated sales would also imply a 21% market share next year.  Let’s assume Stratasys’ market share stays at or above 20% between now and 2020.  That implies average annual revenue growth of about 20%–exactly what Stratasys management anticipates over the long run, according to the presentation it gave upon announcing the Objet acquisition.

Management also said in that presentation that it expects a net income margin between 16% and 21% after synergies.  If we use 17.5%–and project forward, earnings per share grows from $1.97 next year to $6.87 in 2020.  In other words, SSYS is currently trading for about 10x 2020 earnings.  Said another way, earnings can be reasonably expected to grow at an 20% annual rate through 2020, but the current P/E is nearly 35x.

I really like the potential for 3D printing, but with SSYS having more than doubled in less than a year, I’m leery of the valuation.  Sure, Stratasys could increase its market share and/or its net income could come in at the high end of management’s projections.  Or overall industry revenue could grow faster than the 20% rate expected by the analyst data we found.  Or not.

Consider that Stratasys’ market cap was just $785 million when it announced the Objet buy.  That valued Objet at about $630 million in the 100% stock deal, or about 4x estimated 2012 revenue.  Now the combined company is trading for almost 6.5x revenue.  Would Objet’s board agree to a deal at 4x revenue if they didn’t think that was a fair valuation?  Probably not, although being paid in stock means they knew there was likely additional upside ahead.  But a 60% gain in eight months?  Not sure they saw that coming.

BB&T Capital Markets issued a “Buy” rating on SSYS just last Friday, but my old friend Cramer said in November, “That is up too much. That is a register ringer if I ever saw one. I don’t want to be in a tech stock up 100%.”  Given the recent run, I don’t think SSYS is likely to deliver that much appreciation in the nearer term.  I’ve got the company on my radar and I’d like some exposure to the expected growth in 3D printing.  But we’re not going to force the trade just yet.

As an aside, there is one other publicly-traded company in the 3D printing space that we checked out:  Arcam AB (AMAVF.OB).  It’s a Swedish firm that’s selling 3D printers that can print with metals—something not many are doing just yet.  Its valuation is less than half that of DDD and SSYS, but I don’t love investing in foreign firms because their reporting requirements aren’t as strict as they are for American companies.  Also, Arcam’s trading volume is extremely low, meaning there could be liquidity issues.  The stock has jumped from around $10/share to a high of $17 in recent sessions—probably thanks to the growing hype around 3D printing in general.

Why earnings could make markets could really really rally (and a PA on Bitcoin)
Trading with Cody Weekly trade summary, articles & links
Rock n roll portfolio
Remain Cautious: Apple blames COVID-19 for miss
The markets appear to be trying to attempt to sort of stabilize a little bit...