Last week, when the Nasdaq was at 3050, I wrote the following:

It looks to me like the path of least resistance is now lower for the near-term, as the R/D Regime clearly wants to try to hold this market hostage and appears ready to keep the “you should panic over this” push going. This isn’t what trading and investing is supposed to be about, but it’s why I created the concept of “Revolution Investing” because we’re truly living through a economic and political revolution, even as most people don’t realize it yet, despite this kind of tyranny from our reps. Sigh.

At any rate, I think we probably need to focus on scaling into some of our shorts rather than trying to scale into more long exposure just yet. Yes, the markets are “panicky” this morning, but the DJIA, for example, is right now trading at the save levels it was Monday at 2pm or so.

Nothing’s changed in our overall approach here, but I think we might be in for some rough riding for a bit. Easy does it.

Today, just a handful of trading days later, with the Nasdaq down more than 3% in a straight line at 2950,

my feet-to-fire near-term market analysis isn’t nearly so bearish. You often see me use sentiment as my primary near-term markets driver and when sentiment gets extremely bullish or extremely bearish in one direction or the other, I’ll try to take the other side. At other times, especially in today’s markets, it’s politics and propaganda that often drive the near-term and the sentiment that they drive can often further feed on the direction of the markets.

My point is this — do you guys remember the worries that everybody had last year about taxes rising? Do you realize that despite the incessant pounding of the panic drum by the mainstream media over this year’s fiscal-cliff negotiations that we went through the same damn thing last year? 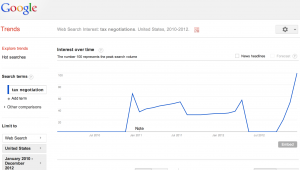 Last year’s big rally literally started on December 28, 2012, as the forces of panicky headlines and tax-avoidance selling were theoretically the primary near-term drivers of the markets.

I am looking to scale into some Fusion-IO common stock and some more Apple common stock, but am putting the bids out a little bit beneath the markets so as not to be in any rush. We’re still quite a bit long already and we’ve got a lot of call options that would really kick in if the markets were to look anything like that chart from early last year above.