Don’t forget about this week’s Live Q&A Chat at 2pm EST at https://tradingwithcody.com/chat. If you can’t make the Live Chat, just email me your question by replying to this email or by sending it to support@tradingwithcody.com.

As for the markets, stocks had been fading steadily since the morning’s huge pop open, but have more recently started to find their footing. Apple’s trying to get back above $550 but it’ll likely just follow the market from here to close. How long can the euphoria last? See my post from earlier this week (https://tradingwithcody.com/2012/12/27/trade-alert-history-rhymes-so-remember-the-times/) when I wrote: 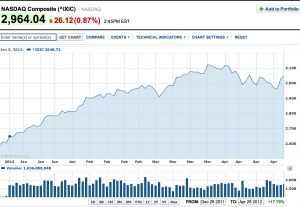 Last year’s big rally literally started on December 28, 2010, as the forces of panicky headlines and tax-avoidance selling were theoretically the primary near-term drivers of the markets.

The markets are up 3-4% since I wrote that and while I still think the path of least resistance remains higher, I’m trimming some of the stocks I was buying during the panic, as noted earlier.

Steady as she goes, despite the big waves.

Markets and answers for you NFLX questions...
Predictions: What's the biggest industry ever and Trump's re-election odds
Trade Alert: Revolution Investing Over The Centuries
I've just added to my puts and short in the...
Does the Trade War even matter? OR: I'm back from Abu Dhabi and ready to rock