Since quitting my job as a TV anchor at Fox Business three years ago and launching TradingWithCody.com, I’ve been very bullish and looking for this stock market to really bubble. I was going through a bunch of charts this weekend when I happened to hit a simple five-year DJIA chart. This chart is a thing bulls dream about, really. 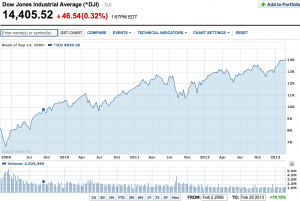 I read dozens of market newsletters and have hundreds of friends from all over the world who run money for a living.

I don’t know how many commentators and friends have quoted the “Well, don’t worry about Cyprus because it’s only 0.3% of the EU’s entire annual economic output.”

Rewind to the market top in late 2007 and early 2008, when the markets were at all-time highs even as it became obvious that there were some serious losses and damage coming from Wall Street’s big banks and the popped housing bubble?Do you remember seeing Lehman go bankrupt and the entire banking system coming to DC to beg for taxpayer welfare to save their companies? That all sounds a lot like the EU’s debt-crisis and Cyprus bail-in/bail-out issues, doesn’t it?

Here’s a little known fact that will blow your mind. Lehman went bankrupt with $1/2 trillion in debt. That’s equivalent to about 0.3% of the US’s entire annual economic output. Oh, and Cyprus’ banks are holding up to 9 times more than their entire GDP in debt, which means Cyprus is actually the equivalent of about 9 Lehmans.

The banks, the EU, the IMF, the ECB and the established governments in the EU will pull out all the stops to keep Cyprus from having to declare outright bankruptcy and becoming a modern-day Lehman, which would obviously catalyze a melt-down around the world similar to what 2008 was like.

But then again, as I pointed out yesterday, the approach that the they are taking to stop that Cypus-Lehman moment from happening is a wildly obvious confiscation of private wealth from the citizenry’s savings and checking accounts. And the Cypriots are rightly raising hell to try to stop this theft, even if it means their existing government having to default on their interest payments to the giant banks, central banks, and periphery governments that a bankruptcy avoidance is destined to avoid happening.

In other words, this very well could be a time and place when the world’s citizenry finally realizes that there is no magic bullet to make all the trillions of losses from these horrible sovereign-debt/mortgage-backed-securities/fraud/theft/corruption and so on simply go away.  How many bailouts have these insolvent banks and governments around the world and in the US gotten already since 2008? How many new subsidies and “liquidity” programs have they already taken from the citizenry in the name of “saving the economy”? Why should the citizens of Cyprus think that this newest bailout wealth transfer scheme is somehow going to be the magic final last one they’ll be forced to sacrifice?

As I’ve said from the beginning, the end game of this bailout culture is truly disastrous and at some point, the end game comes. I’m not going to sell all my longs or get net short in my positioning here. Because again, just as we’ve seen time and again since these global debt crises kicked off in 2008, the status quo keeps finding new ways to make sure these bailout wealth transfers keep happening and keep blowing up new bubbles.

But then again, I’ve added quite a few shorts to the Revolution Investing portfolio and have trimmed back our longs because cycles do happen. Tops and bottoms and crashes and panics are real and always will be. I was a buyer much lower when the markets were panicking about this type of stuff and I rightly saw that the risk/reward was much better than now.

It’s been a pretty steady-Betty rally for the markets for a very long time now. 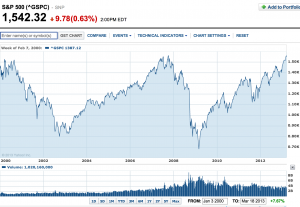 I do. And it’s why you always read me preaching about the importance of being flexible in our investing and trading and analysis.

When I launched that hedge fund back in 2002, my marketing materials were full of that concept of the importance of being flexible. One slide said, “Bet big when the odds are greatly in your favor. Bet smaller when they are less so.”

Get hedged. Make sure you’re liquid here. This is a time of betting smaller. Be patient.

Feet to fire, I’d say that stocks will probably still be in bull market mode overall for at least another year or so. But that’s a far cry from when you used to hear and see me jumping up and down on TV with Whoopi Goldberg screaming about the coming reinflated stock market bubble as I was in 2008 and 2009.

Two specific stock notes for you before I go. FutureFuel is down today after last night’s earnings report. We’re still up on it since we bought it and I’m just going to sit tight with it for now. Juniper had a rather vehement downgrade at Goldman, though they were already at a “Hold” rating and now call it a “Sell” or whatever. I plan on scaling into more Juniper but not today.

The  markets are trying to get uglier an...
Remember how I told you guys a few times...
50 Stocks for The Voice Revolution
Here’s what I’m reading today and what I’m thinking about each topic...
I am heading to NYC to join Occupy Wall Street this weekend and other links