What are the major disruptive technologies, ie, Revolution Investment themes, that have made people rich over the last decade?

1) Internet sites – Yes, despite all the dot-com companies that went bankrupt and all the fortunes that were lost gambling on pie-in-the-sky ideas like Pets.com and Webvan, the dominant Internet destinations have become de facto standards with huge critical mass and economies of scale driving massive profits. And those Internet sites that won, won big. Here are five examples: 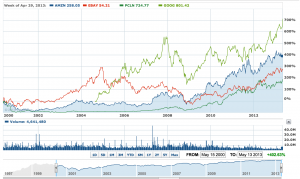 2) Streaming video – You read about college kids and technophiles dropping their cable/satellite TV services and going all-streaming video. AppleTV and iTunes, GoogleTV and YouTube, Netflix and Amazon Prime are all mainstream now. But just seven short years ago, hardly anybody understood what Internet video was, as you’ll see in this old Kudlow & Company Cody Cam street interviews short I did for CNBC back in 2006 –

3) Apps – Apps for smartphones and tablets are simply software programs that you install on your phone. All the software you’ve ever used on your PC, like Word, Excel, Adobe Photoshop and so on, are also “apps”. But the fact that it’s so much easier to type in a web site in your browser on your PC keypad vs. trying to do so on your touchscreen smartphone or tablet, meant that the market for smartphone/tablet apps was going to be much bigger than the PC app market. As I wrote over and over back in 2007-2010, the App Bubble (see: How to invest today for the app bubble arriving tomorrow, for example) was coming and it’s been a doozy. From Zillow to Pandora to Yelp, there are a dozens of app-related stocks that came public in the last three years that are now at all-time highs.

As earth-changing as each of those aforementioned technologies were, I think there is a burgeoning technology that will be more disruptive than anything since the advent of the PC – what I call the Miniature, democratized computer development market, or the “Mini Me Computing” market, of which the new Raspberry Pi is the best example. In my post earlier today, I detailed why Google is the purest play on the Raspberry Pi and other Mini Me Computing trends.

But as I often note, I’ve learned a lot and made a lot of money by listening to my readers who are often way ahead of burgeoning trends and how best to invest in them. Does anybody out there know of other good plays on the Raspberry Pi/Mini-Me-Computing theme? Please talk to me and Elad in the Subscriber Chat Room (https://tradingwithcody.com/subscriber-chat-room/), email me at support@tradingwithcody.com, or tweet me @codywillard.

Brave enough to make the hardest trade?
I wanted to share the analysis of three...
Must-reads: OWS jobs, Apple production reports and four stages of investment knowledge
The next FAANNG stocks (and the last ones too!)
Time to panic! Or not...