The bubble continues to blow bigger. And with every new article you see in the mainstream media explaining to you why it’s so rational for the markets to go straight up for the past few weeks, months, or years, the closer we get to at least a short-term top. The more you see people acting as if they knew all along that the bubble would be here but who can’t point to a single quote they made before the bubble had blown up like this the more likely we are to see the markets make a fool out of them. It’s the nature of the beast, same as it ever was, just another day at the office, another day another donut…you get the picture.

I mentioned in the chat yesterday that I’d rather trim some Google than buy some Google and I’m doing exactly that this morning. Trimming about 1/5 of my position as the stock hits yet new highs again today. I didn’t catch the high of the day, and that’s not my objective, as I act on my discipline and trim.

In the meantime, here’s something that’s been on my mind a lot lately — global population, the ups and downs of a 7 billion people planet.

With 7 billion people out there for you to engage, for you to sell something to, or for you to buy something from, or for you to learn from using YouTube, Twitter, Facebook, a plane, a boat, a car, a phone, a blog, or at the bar, there’s never been a better time to take advantage of the upside of civilization. Yes, food and political and debt and terrorist crises are still a part of our lives.

But there are so many opportunities to educate ourselves, to build new local and global businesses from anywhere in this country and most of the developed world. There are 7 billion people doing about $80 trillion of business flowing in the world’s economies every single year right now. That’s $200 billion flowing by in the global economy every single day. Our job as investors (and/or as entrepreneurs and citizens of the world) is to get our bucket out there in front of the fastest flowing/growing segments of that economy.

Have you ever pondered just how different the societies, the economies, and the world we live in is from any other time in the history of the planet? Take a look at this long-term chart of the population of Earth going back to 10,000BC, from wikipedia. 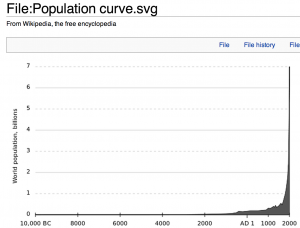 Let’s put some of that chart in perspective by using some relative numbers from today to other times in the past.

There are 20x more people on the planet today than there were in 1350 when the Great Famine and the Black Death had decimated much of the world, when according to Wikipedia there were 370 million people here. With 120 million births per year, that means every three years, there are as many new people brought into this world as inhabited it, just ten centuries ago. The New Testament is about twenty centuries old, by comparison. There are almost as many people in the US alone (311 million according to the US Census) as there were on the entire planet back when Christopher Columbus landed in America.

Moreover, here’s a population chart going back to 1800 – 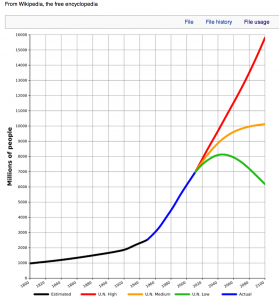 The population has gone from 1 billion people to 7 billion people in just two centuries. In other words, more people live in China or India each today (1.3 and 1.2 billion respectively) than were alive on the entire planet Earth when our forefathers were writing the Constitution.In the next fifteen years more people (approximately 1 billion plus) will pass away than were breathing back when the French overthrew their monarchy and established democracy. Facebook has more active monthly users (1.1 billion plus) than number of people who existed (1 billion) when Count Alessandro Volta invented the battery in 1809.  Nokia, Apple, Samsung, and the other top cell phone vendors sold more phones last year (1.6 billion) than the number of people alive at the turn of the last century.

We’ve doubled our population on this planet in the last fifty years. That means that there are twice as many potential consumers, laborers, investors on the planet than there were when most of the mainstream global corporations were getting started.

Google gives results for more than 4 billion searches every day. That’s more searches that you could be a part of every day than the entire population of the planet (4 billion) when I was born in 1972. The Apple store just passed the 50 billion apps downloaded mark. That’s 10 times more apps downloaded from the Apple App Store in the last five years than the number of people populating the planet (5 billion) when I graduated high school in 1991.

No matter how badly the economy crashes the next time it crashes (and it will), there will still be all these billions of people on the planet needing to eat, to learn, to consume, to be entertained, to invent new technologies, and so on. I’ve personally built a helluva career out of getting in front of these types of trends and putting my own bucket out there into the global economy. You can too, no matter what happens to the broader economic cycles and stock markets.

Trade Alert: Nibbling more of this new name
Trade Alert: Economic analysis and adding to a short
Trade Alert - Some active portfolio management with an update on gold and banks
Trade Alert: Trimming and hedging into the euphoric rally (and I'm now bullish on some pot stocks)
Trade Alert: A QCOM sell & two tranche buys