Trades first. I’m buying a little bit of FB, ZNGA and LNKD common stock this morning, as I’d mentioned I wanted to in yesterday’s chat session. I’m going to put the shares I buy in each of the three of them this morning in a “Do not touch for ten years” basket and let this investment play out. Each of the three could be a 5-10 bagger over the next decade and if any of them are, that would obviously more than make up for the other two in the basket. We will call this, henceforth, the “Social Decade Basket”.

Which takes me to today’s Trader’s Thought of the Day.

Nobody’s perfect. You’re going to make a lot — and I mean a lot — of mistakes trading and investing over the years. Since I first reached out to Jim Cramer asking to contribute to TheStreet.com back in 2000, I’ve been putting a public track record of my picks and analysis out there for a long time now. And I’ve gotten a lot right. And a lot wrong.

Whether the time frame you use for most of your trades is three minutes, three days, three months, three years or three decades, your goal is to get more trades right than wrong over the next 10-30,000 days of your life. It’s important for every one to think through what the goal of each trade is. Are you trying to catch a few basis points on a quick flip of a large position? Or are you looking to ride a chart for a few months using some complex options strategy? Or are you simply trying to find a couple picks like Apple at $7 and Google at $95 as I have been lucky enough to have done over the years?

Last night as I was making up a homemade goulash dinner (turned out delicious, I might add), I heard some mindless reporter breathlessly proclaim how “Housing seems to be back and back in a big way!” to intro her segment last night. Today’s headlines are full of stuff like this:

Has time to get back into real estate already passed for those looking to make a quick buck? What about if your time frame is ten years or more? Recall that back in 2011, in the depths of the great 21st century real estate crash, I was a big real estate bull and was putting my money where my mouth was.

For example, I wrote the following on April 28, 2011 in Why there’s never been a better time to invest in real estate than right now:

From 2005 to 2007 and for the first year of my show on Fox from late 2007 into 2008, I used to say one thing about real estate as an asset class whenever it came up, “There’s never been a better time to sell real estate than right now.” Well, fast forward to 2011, three years after the nationwide real estate markets topped out and crashed in historic fashion and guess what…I’m a real estate buyer. I’m buying land in NM for 70% off what it was listed at in 2007…But I am very confident that ten, fifteen or twenty years out from now, I’ll have some huge increase in values in the land I’m buying for up to 70% off today. Real estate was in a bubble and I had the patience to wait for that bubble to pop. Let me go ahead and start saying the words, “There’s never been a better time to buy real estate than RIGHT NOW” on my national platforms in 2011.

A couple weeks later, I followed that article up with a column called Calling a bottom- now is time to buy real estate:

“Were I to try to summarize my current stance here in the spring of 2011, I’d say that I think real estate is probably a terrific buy in many areas in the country and that we are indeed seeing a technology stock bubble inflate in front of our eyes.”

In the last two years, prices have risen big time in the places where real estate had crashed. 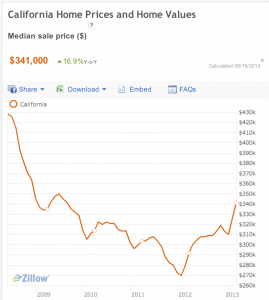 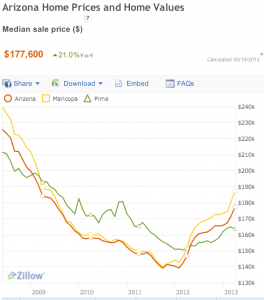 That makes me less bullish not more. I’m less bullish on real estate in places like Arizona and California now that prices have come back big time in the same way that I’m not nearly as bullish about tech now that we are up huge from where we were back in the summer of 2011. 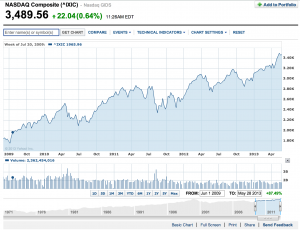 This morning as I took my dogs on a 4-wheeler ride around the property I own here in NM that I need to start including real estate in the “Latest Positions” updates to help you guys understand where my portfolio sits overall for the long-term. So in tomorrow’s Latest Positions column, I’ll be sure and do that.