We can’t control when or where opportunity arises. And as you know with gold having crashed some 30% from its highs, I started rebuilding my own physical gold and silver assets in April, looking to take about 1-2 years to build up those assets to about 10-15% of my portfolio to own/hedge/protect my family with forever.

And since I started scaling back into physical gold and silver their crashes have accelerated further. And I’m using this latest round of gold and silver spot prices showing another fresh round of intraday crashing here today to head over to my local and/or other dealers to aggressively buy another tranche of gold and silver coins and bullion. I’ll probably have to pay about 7% or more over what those so-called spot prices are supposedly showing the value of gold in the real world markets today.

Here’s a little more on why I’m so bullish right now on gold and silver coins and bullion and why I am so against the GLD, SLV and other precious metal ETFs. The big banks who control the paper ETF and spot prices have less gold per promise than they’ve ever had in our lifetimes. Meanwhile, recall that just a few months ago, Germany requested 321 tonnes of their physical gold bullion repatriated back out of the US. Recall that just a few months before that Venezuela had requested 200+ tonnes of their gold bullion repatriated back to their homeland. As Jesse pointed out today, the US was able to fulfill the Venezuela gold bullion request in its entirety immediately. The Germany request has been met with a flat “Sure, we’ll get you your gold in seven years.” 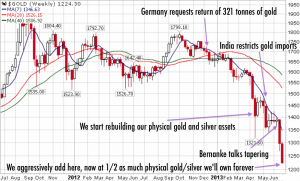 So both the US government and the banks that they’ve bet our future on are now in a position where they need to get their hands on as much physical gold and silver as they can and the easiest way to do that is by plundering the wealth of the world’s people by artificially crashing gold and silver here to try to induce them to sell away their physical gold and silver coins and bullion at lower prices. When the Bank of India restricted gold imports that also temporarily eliminated one of the strongest and steadiest demand centers in the world over night. The physical gold trading in India has only gotten further restricted in the weeks since.

I’m going to sell 1/2 of my remaining DIA calls which are now more than double the price I paid for them, leaving me about 2/5 of the original number of calls I’d bought back at the lows earlier this week. And yes, once again, a wildly lopsided result to our “Who’s more scared right now, the bulls or the bears?” poll was darn near perfect contrarian indicator for the near-term emotional market move. The DIA is up nearly 500 points in a straight line since I wrote, “The big selloff in stocks this morning is probably taking that “bulls are more scared right now” over the 90% threshold which means there’s probably a good trade to the upside this morning here. I’m going to buy some index ETF calls this morning” on Monday.

Steady as she goes otherwise. At least as steady as they’ll let us keep ‘er.