God don’t make promises that He don’t keep,
You got some big dreams baby, but in order to dream you gotta still be asleep.
When you gonna wake up – When You Gonna’ Wake Up – Bob Dylan

Short-selling is when you borrow something (a stock, an ETF, a bond, a beer or anything else), promising to return it at some point, and go out and sell it to someone else. Eventually, you have to buy what you sold back since it wasn’t yours to sell in the first place.

Naked short-selling occurs when traders sell securities (and/or physical assets) that they don’t even bother to go out and borrow from someone first to other traders. It’d be like selling someone your neighbor’s tractor and just hoping that the guy who bought the tractor from you doesn’t actually ever go pick it up from your neighbor’s yard.

It used to be true, at least in the US markets back before the days of too-big-too-prosecute that, as Daniel Drew once famously said “He who sells what isn’t his’n, Must buy it back or go to prison.” These days though, the banks know that there is no risk of prison for just about any financial crime, much less for simple naked short-selling.

A short squeeze is, according to Investopedia, “A situation in which a lack of supply and an excess demand for a traded stock forces the price upward. During a short squeeze, individuals holding short positions are typically forced to purchase shares in situations where the price increases rapidly, in order to exit their short position. Short squeezes occur more often in smaller-cap stocks with small floats.”

In other words, a short squeeze happens when there’s a scramble, often forced by margin calls, by the shorts to buy in the positions they’ve previously borrowed and short-sold on the market. Naked-short-sellers might not go to prison for selling things that aren’t theirs anymore, but they still have to meet margin calls when the other banker calls it in.

Thinking it through then, wouldn’t you conclude that especially in a day and age where naked short-selling is likely running rampant and as markets as diverse as LIBOR to sovereign debt derivatives are knowingly manipulated by the biggest players, a short-squeeze can quickly morph into a MOASS (one of my mentors is always be on the lookout for what he called a “MOASS” which stands for “Mother of All Short Squeezes”).

Imbalances build up from the clear disfunction if not outright manipulation in the marketplace especially in markets such as the inter-bank paper-backed promises of physical gold and those precious metal ETFs which don’t have as much physical assets as they issue in promises via those ETFS. And where there’s been a big build up of imbalances, a MOASS can build and flame because all those short-sellers have to buy back what they sold before you go pick up their neighbor’s tractor, especially since there’s probably a few other people who also have been sold that same tractor by the same short-seller, ie, naked-short-selling.

In the last month, gold has stopped crashing (at least temporarily) and as we head into the end of this week when tons upon tons of promised, previously short-sold gold, has to be settled, either with new promises or with physical delivery. There’s a big premium to the settling in physical delivery especially when the gold in the vaults likely has more claims to it by more owners than is actually possible to settle out.

I’ll remind you of how much a bank’s promise is worth by showing you the following chart, which tracks the Google searches for the term “Bank fraud” over the last ten years: 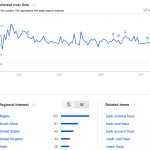 Pretty disgusting that the US and UK are third and fourth respectively in frequency of people Googling “Bank fraud” behind only Nigeria and South Africa. You’d think it’d be illegal for Goldman and JPM and other big banks to drive up prices by stockpiling and moving metals from one vault to another, but the very reason Goldman and JPM are doing it is because they can get away with it.

And while I have no faith that the government and regulators in either country will crack down on the shocking disconnect between paper and physical values of precious metals, I do know that imbalances in the market place eventually correct themselves and that they bigger the imbalance and the longer it goes on for, the bigger the correction will be when it finally comes. In the case of gold and silver, especially the physical asset kind you can hold in your hard, the short-squeeze we’re seeing today, might just be the beginning of a huge MOASS. It might take months or years for the full correction to the imbalances in the precious metal market place to play out, but then again, it could come quick and harsh. The value of a promise depends on the trust.

As for trading, I’m going to lock in a 150%-plus gain on about 1/3 of our GDX call options. Juniper got downgraded today but I’m holding that one steady through earnings.

What’s your promise worth?