First, some trade alerts. Yesterday’s Earnings Report Gamble Flips are played out now and the market has served as final arbiter as always. To review, yesterday I wrote,

PMCS is down 7% today. I’m selling the PMCS calls for a small loss on some of them and about a 35% loss on others. Mea culpa.

SIMO is up 11% and those calls are up 130% from my purchase price. I put about the same amount of money on each trade which means I’ve got nice profits overall on those two trades today.

Facebook has run another 15% since the earnings report last week and we’ve got 500% plus gains in my January call options. I’m selling another 30% of them today, but with the leverage they’ve provided on this upside move, FB remains my largest notional position.

Onto the juice then.

Main Street, especially small town Main Street, is dead. Corporate earnings boom. Wall Street rolls in emergency-measure taxpayer dough. Here’s a chart that’s making the rounds on the Street today and one that says so much about the disconnect between what Joe Sixpack sees in the economy on Main Street vs what the corporate owners and masters of the universe are seeing. 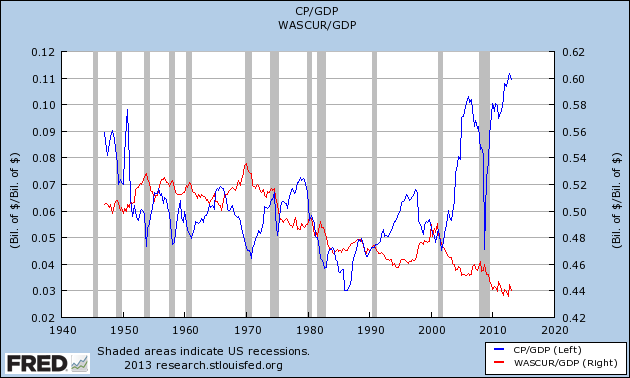 Millions of investors and most “professional” money managers have missed by being on the sidelines and/or lost his shirt by being short this market during this historic rally over the last four years. They’ve has been focused how bad it has been for most of the US citizenry despite the boom in corporate earnings. I once asked Ron Paul and Peter Schiff during an interview in 2009 when everybody on the panel was predicting imminent economic doom and market crashes about the possibility that these insane measures to prop up the corporate economy for the next few years just might kick the can down the road.

It was just a year after that interview when we launched Marketwatch Revolution Investing with Cody Willard and in the very first issue, I wrote,

It turns out that the stock market, earnings and dividends have been moving somewhat in tandem. That’s a different discussion than the one most analysts (especially the bearish ones) have when they rant about how seemingly “disconnected Wall street has become from Main Street.” Main Street and the broader economy are still hurting and showing little improvement. Even if monthly job losses are just a tenth of what they were a year ago, that means that Main Street and the broader economy and the average Joe are still seeing things get worse — they’re just not getting worse as quickly as they were a year ago.

We call this newsletter “Revolution Investing with Cody Willard” to answer the trillion dollar corporate welfare programs and the new bills for health care and financial regulatory agencies. The new rules in this country that override the economic paradigm we’ve been living under since the 1930s have been ramped up by several orders of magnitude — in just the last two years.

And back in early 2010, while the markets were in a major pullback and the headlines turned panicky, I maintained my bullishness on the idea that corporate earnings and Main Street were becoming further disconnected for this cycle.

Long-time readers and viewers of mine will point out that my nonchalance about these ongoing European Union bailouts and macroeconomic concerns are a far cry from when I was sounding the alarm on the Dow Jones Industrial Average DJIA from 12,000 all the way down to 6,500 during the dark days of the credit crisis and Lehman/Bear Stearns collapses and the ensuing Wall Street bailouts.

Why don’t I think the markets will drop to 6,500 this time? I’m thinking we might be seeing a blow-off top in the “fiscal crisis concerns” market, and I think the key to making money here is keeping your cool and to get longer into weakness below DJIA 9,850. Cover some shorts and start scaling into some longs and even some calls in the best names that you’ve got in your portfolio.

I’m still amazed at how completely the mainstream media has moved on from those panicky headlines now that the markets are at all-time highs again. Is it chicken or the egg?

We have to strive to remember to “Flip It” and make sure we’re setting ourselves up now while the times and money are good so that we can take advantage of the next downturn. And there will be a down turn, and it will likely smash the entire paradigm of the current US economy, making it self-sustainable after washing out the greed and fraud which dominate our markets today.

The juicing of our economy has worked wonders for the stock market and corporate earnings. Again in 2010, in a Revolution Investing newsletter called, “Juicing the economy”, we looked in depth at the self-fulfilling temporary cycle that policies were driving in the broader economy and stock markets. And side note once again, chicken or egg on which is driving which, the economy or the markets right now?

What happened when Ben Bernanke and Congress and the Administrations (Bush and then Obama) scrambled to throw literally trillions of dollars of welfare funds and new programs at the banking system just as the markets were pricing in the end of the banking system. What did we think would happen to the banks, regardless of whether the economy would recover or whether unemployment would skyrocket? The banks recovered and recovered huge. And while I do think the banks are priced out to bubble proportions right now, aren’t going to get new trillions of welfare and face fraud charges, foreclosure freezes and so on, there’s a very important lesson for us here.

So you’ve got some of the smartest money out there, these professional traders who are telling me why we’re about to crash again loaded up against a higher market. They’re short all the stocks they can get their hands on — especially those momentum names like Netflix NFLX  and, yes, Apple AAPL  and Qualcomm QCOM. And all those shorted stocks, borrowed from somebody and sold with the hope that they can be returned to their rightful owner by being bought back at lower prices in the future, provide a whole lot of potential upside to the markets.

All these all-time stock market highs and booming corporate earnings aren’t all that shocking when you step back and appreciate the Revolution Investing cycle that we set ourselves up for when we launched and for the first couple years. And objectively speaking, there’s been no slowdown in the corporate-earnings-friendly policies that have become de facto for both Republicans and Democrats alike. The Fed says it might or might not at some point slow down a little bit of the trillions of dollars it continues to throw at the too big too fail banks, which means nothing’s changing there yet either.

Does it become a game of how long do we ride this horse? How long do we stay at the table with our winnings? Stock market cycles are not like rolling the dice freshly each time, after all. The higher prices go, the longer the cycle goes higher, the more likely the upside gets completely priced in, meaning the risk/reward for being long gets worse the higher prices go in the stock market. Just how long can things go right for this country’s corporate economy? Remember this, from late 2010, in a column called “Most likely economic scenario”?

What if things go right in this country for the next year or two? Bull markets are built upon the bricks of skepticism and upon the backs of bears who are short the market and therefore will have to buy at some point to cover and/or chase the rallies. And, as I’ve been pointing out since July’s lows, 25% ago, the bears and shorts have been aggressive in fighting the boom, despite the fact that both the fundamentals and the macroeconomic (i.e., Fed’s relentless liquidity/money pumping) forces seem to point to much higher prices…

But any discussion of corporate margins and their future direction is completely misguided without focusing on the incredible corporate-welfare programs, such as the government-funded, but corporate-administered health-care expansion policies and especially the bailouts and Fed emergency-liquidity policies. We’re talking trillions of dollars in direct and policy-directed corporate-welfare programs that have been created in the last couple years. All that government help is indeed very likely to help its targets: the same corporations whose profit margins we’re discussing right here right now. I think it’s incumbent upon all of us as patriots to fight this trend of endless corporate-welfare programs with our votes, but as investors, we need to profit from it. That means betting on corporate margins’ continued expansion.

One of the main reasons I’ve created Revolution Investing is because it’s now so important for us as investors and savers to gauge the impact of these policies and their consequences, both intended and unintended.

One of the most remarkable lessons from the last five years has been that the Treasury, the Federal Reserve and the legislative branches will do whatever it takes to keep this cycle from turning down again and that they’ve found more ways, tricks, and weapons to do so than most analysts realize. Skepticism wanes, confidence and prices rise, downside risk increases and upside potential declines. We would be wise to remember that scenario is self-defining and unbreakable. If it’s a nine inning cycle, we’re likely at least in the seventh inning. Don’t get tagged out.

PS. Help us market this style of investing in the revolutions by sending this TradingWithCody.com update to a few of your friends that you think might like it. I’m embracing the Internet Revolution right here, right now by asking you to do so — think about it! And thanks for your support.