It’s starting to feel a little bit slippery out there in the stock markets. To the downside, that is. I am adding to my VIX calls, buying some December 14’s for about $1.30. Why? Well, take a look this one year Nasdaq chart. 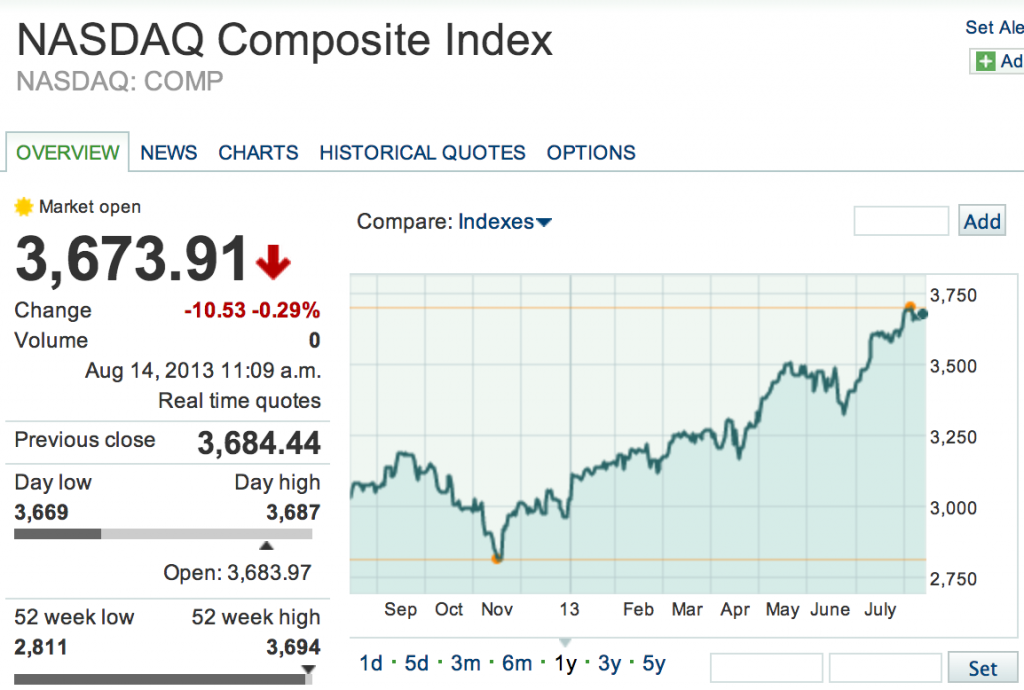 The markets can fall a long way, 10% or more, and still be up nicely on the year. Are you prepared if the market were to go back to even on the year? Could happen, you know, even as I think such a dramatic collapse from here in the next five months is unlikely.

I’m also taking the loss and selling the JDSU and BRCD earnings gambles from yesterday for just about whatever I can get for them. JDSU was up earlier this morning and I got of some of the calls for almost breakeven, but the rest are now down. A trade is a trade is a trade.

And I’m selling a few more of my remaining SLV call options. I’d like to get out of the SLV trade completely in the next few days and let the physical silver (and gold) do the working for me from here. This SLV chart is rather remarkable in its 5-day ascent.

As you know I don’t trust the paper ETFs like  SLV or GLD for the long-term and this was just a trade and one that’s now worked out beautifully. I’m now down to about 10% of the number of SLV call options I had at the bottom last week with 100-300% gains on ’em. This SLV trade has been a classic example of the approach of trimming down slowly in scale with tranches after having slowly scaled into the position on tranches.

Speaking of not trusting the precious metal ETFs like SLV or GLD, take a look at this chart courtesy of Comex showing the amount of registered gold in their vaults. 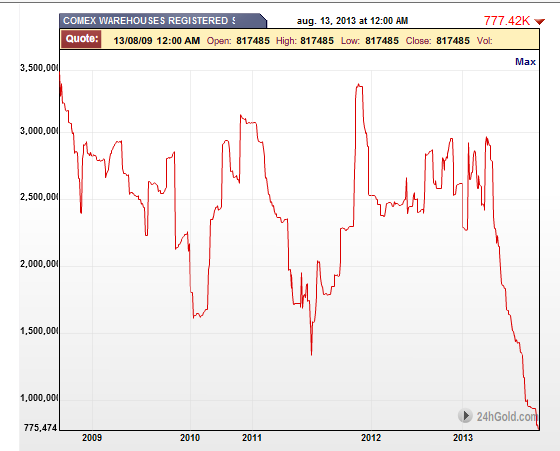 Do I sound almost crazy by outlining that potential scenario? Well, that’s good, because Black Swans, which according to Wikipedia:

A theory was developed by Nassim Nicholas Taleb to explain:

So, by definition, a Black Swan event sounds crazy until it hits and then the masses will look back and rationalize how they weren’t prepared for it. And I would fully expect the multiple paid for stock market earnings would immediately contract in such a Black Swan event bringing on a crisis in confidence amongst all investors. Heck, there could be another run to the relative “safety” of Treasurys in such a scenario.

Don’t be one of those masses. Be prepared, be flexible and be contrarian, just in case the next Black Swan comes along when you least expect it. Which again, be definition, it basically has to.

Markets, daughters and more
Party invite, stressed-out investors, and another Penny Stock Hype Machine
Cody Kiss & Tell: A Euphoric Market, the Tech Rotation and Don't Be "Ashamed" of Trading Mistakes
Three drone stocks stand out for now
In search of safe high-yield and diversification: Picks and allocations for retirees