Meanwhile, I’m going to trim about 1/10 of my SSYS position which is at yet new all-time highs again and which I haven’t trimmed before.

“Geez, whats going on with Apple? It gets bigger everyday. And I thought taking steroids was illegal.” – TradingWithCody.com member, BenB, in the Subscriber Chat Room this morning.

Apple’s on a tear, as its “cheapness” has become a focus once again with Carl Icahn joining the chorus of institutional investors who want the company’s board to do something more serious for investors with their record large net cash of more than $150 billion. I like to put huge numbers like that for people into a different kind of perspective, so let’s do some relative analysis of just how huge that cash pile that Apple is sitting on really is.

Apple’s net cash balance is now large enough to talk about in terms of trillions of dollars, as in, it’s now more than 0.15 trillion bucks. Or 1/6th of a trillion. Apple could have a net cash balance of more than a trillion dollars by 2020 based on their 2014 projected cash flows even with its current dividend and buybacks.

Apple could issue a one-time $150 billion dividend, or nearly $150/share, which would be the equivalent of pumping almost a full 1% of this year’s US GDP into the economy.

$150 billion is more than the entire market cap for Oracle or Cisco or Intel. Or Disney. That is, Apple could pay $150 billion in cash for the entire Disney company, including ESPN, ABC, the theme parks, the movie production and distribution assets and so on, and it’d still be a 25% premium to today’s trading price and more than the company has ever been valued at. Not that Disney would sell. I’m just sayin’.

$150 billion is more than the entire market caps of Hewlett-Packard, Dell, and Netflix…combined.

In two years, at this the current rate of cash flows, Apple would have enough cash to buy Microsoft at today’s market cap.

Continuing on with the subject of Apple’s cash balances — How great of timing did Tim Cook have on going to the markets to borrow billions of dollars to finance that buyback? I’ve been part of the growing chorus of Tim Cook critics since he took over after Steve Jobs’ death, but credit goes where its due. And borrowing some $17 billion to fund dividends and stock purchases back in late April when rates were at historically all-time low levels…well, brilliant.

Take a look at what corporate bonds have done since Apple issued their bonds. 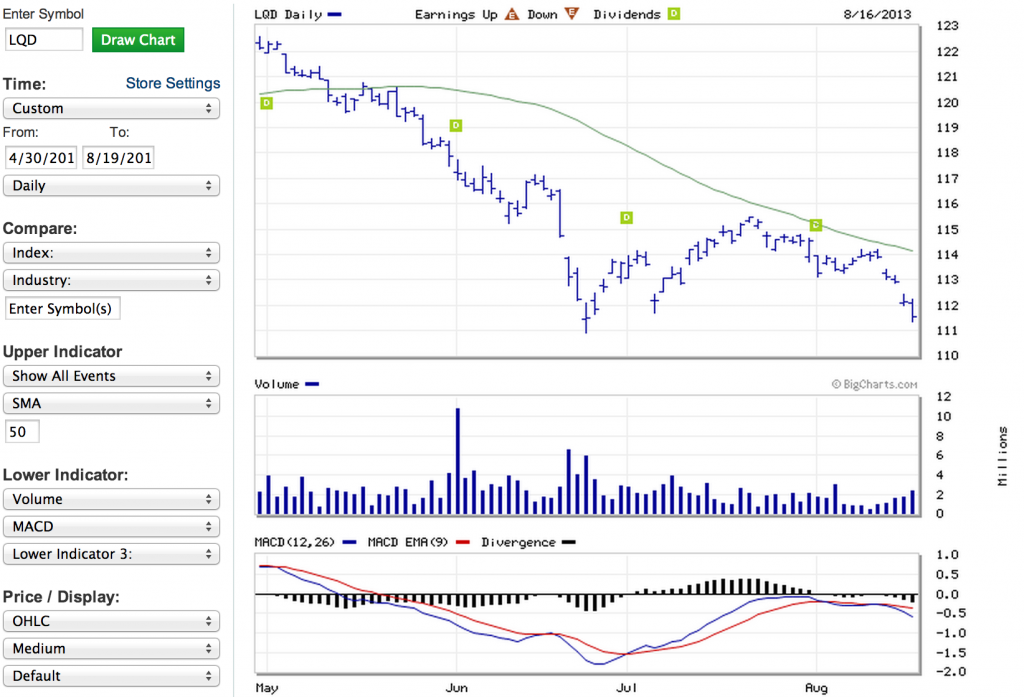 Meanwhile, Apple’s finally  going to be rolling out some new products, a new iPhone, a cheaper iPhone, new services and features within those new products and old alike and so on.

Finally, one pop anecdote about Apple sentiment here. On a contrarian note, the fact that there’s a new movie about Steve Jobs and Apple hitting the theaters after this big stock run up is classic. But, in a “Flip It” contrarian kind of way that probably trumps the prior note, the fact that the movie opened to hugely disappointing results is probably a very bullish concept.

Last week, I told one of my subscribers, that “I do think AAPL’s likely to continue its upward momentum and could get to $550 or even $600 by the end of the year.” I still think that’s the case, and it’s one of the few stocks I own that I’ve not trimmed of late.