Dr. Ernest Gunther: May we have the air conditioning ducts and heat vents closed, please. And no movement while the air settles down. Anybody down there planning on having an itch, please scratch it now. Not later, please. – The Boy in the Plastic Bubble (1976 TV Movie)

No trades for me today. Here’s what I want you to think about today — Remember the stock market bubble that the Fed helped drive back in the late 1990s when the cut rates out of Y2K fears? Remember the stock market bubble that we got when the Fed drove rates artificially below market rates in the mid 2000s? Imagine what 0% interest rates, relaxed accounting rules and trillions of dollars worth of mortgage backed security purchases at inflated prices dictated to the Fed by the selling banks is going to end up doing in the bubble blowing arena. We are partially through the process. I think it could get even crazier before the reset/crash comes, as I have been saying since 2010. When will it end? Stay tuned, I’ll help you figure that out.

Here’s the Trader’s Deep Thought of the Day, along with a Chart of the Day to stimulate it. 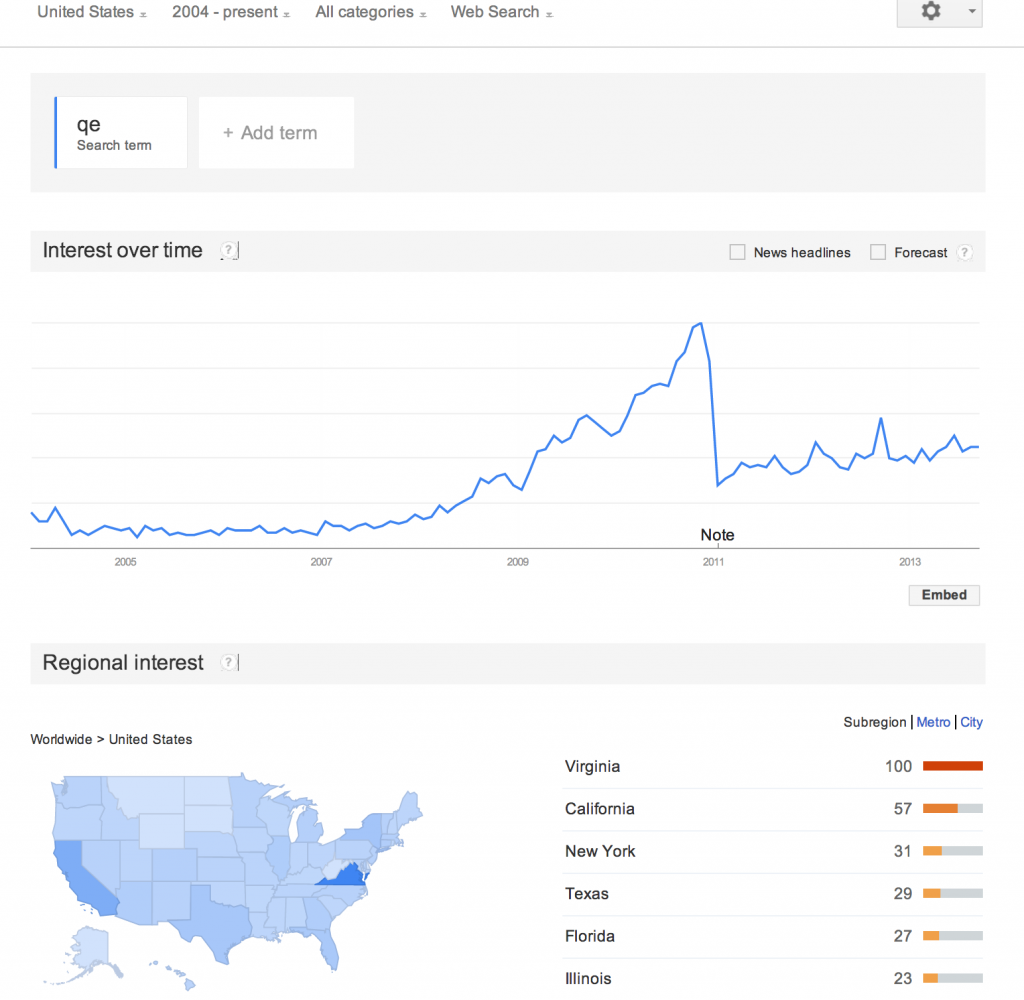 And while we’re at it, take a look at that color-coded US state map. California and especially the DC area searched much harder for QE on Google than any where else in the country. Too bad more people around the country aren’t aware.

A few other notes and links for you dear readers today. (Some of the commentary is from this week’s Live Q&A Chat Transcript, by the way.)

I’ve found the perfect trading app – https://itunes.apple.com/us/app/scutify/id673974489. You can also check out their site, which is equally helpful for real-time markets information at Scutify.com. If you download the app or visit the site, I’d love to know what you think of them.

Fear and greed on Wall Street: Who’s scared now? – Since I first started my blog on Marketwatch a few years ago and back for years on my other blogs, I’ve occasionally asked, “Who’s more scared right now, the bulls or the bears?” to try to get an idea of when the sentiment of the mainstream trader and investor has gotten lopsided. I am sure that my commentary before the link to the poll affects people’s votes, so I try to be pretty objective in my commentary in these poll posts. That said, I am also sure that the readers of mine both on Marketwatch and especially those here at TradingWithCody.com often share my contrarian approach and analysis thereby affecting their votes too. Now, all that said, I totally agree that since the poll seems to work when it gets extreme readings that who cares if I’m affecting it or not. It’s working as is, so I’m going to continue to use it til it stops working (which I’m sure it will someday). So help us get the latest fear indicator update in with your take – “Who’s more scarred right now, the bulls or the bears?” You can email me you answer at support@tradingwithcody.com, or leave a comment below or just go take the poll itself.

Republicans Seek to Avoid Shutdown by Starving Health Law – I would be surprised if the markets don’t freak out at some point about something and that the mainstream media might very well pin the freak out on the debt ceiling negotiations…but as I reminded everybody in this week’s Marketwatch Revolution Investing, even a $100 billion debate give and take on the debt ceiling fake negotiations between the Republican and Democrats and Boehner and Obama is less than 0.03% of the “hidden economy”. So it won’t matter but for the short-term anyway. And we’ll want to buy if the markets crash over “debt ceiling crisis” headlines in the next few weeks. Until then, I do think the SPY puts and VIX calls are a good hedge.

Another Fed surprise: Bernanke now sees ‘tapering’ as tightening – I still think the FED is powerless against the longer-term and shorter-term trends of higher rates steadily hitting the markets. I think the idea that if the FED prints worthless dollars and buys worthless mortgage securities from bankrupt insolvent TBTF banks that we would then maintain lower rates is folly. Rates are going higher whether we devalue the currency with endless free money for banksters or whether the FED finally gets a clue and stops stealing from my 96 year old grandfather-in-law.

Trade Alert - The single most impressive number from Facebook's report
Random Thoughts
Before they were the four most valuable stocks on the planet...
Google's up 1000% since we first bought it
Party invite, stressed-out investors, and another Penny Stock Hype Machine