Every man is equally entitled to protection by law; but when the laws undertake to add… artificial distinctions, to grant titles, gratuities, and exclusive privileges, to make the rich richer and the potent more powerful, the humble members of society — the farmers, mechanics, and laborers — who have neither the time nor the means of securing like favors to themselves, have a right to complain of the injustice of their government. – Andrew Jackson

Paying an average of just over $1200 an ounce overall, I’m buying another small tranche of gold coins down here from my gold dealer and some that I got a bit cheaper as the seller needed to unload them.

Let’s run through some must-reads for Revolution Investors.

Comex Warehouses: Potential Claims On Deliverable Bullion at Historically High 80 to 1 – “The Comex is now the tail wagging the dog, a paper sideshow to the real bullion markets which are moving East. This is something that very few economists have yet to internalize.”

Ford & Others Sign on for Pandora’s Car-Only Ad Program – Pandora’s popped on news that they’re going to start creating more revenue streams from car dashboards. That’s fine for hype, but notice how Google $GOOG (and soon, Apple $AAPL) are getting into the dashboard business too? Proprietary dashboard touch technologies like the Cadillac Cue and all the others cost hundreds of dollars and are terrible. Long-term, I still think Pandora’s doomed, but if it goes up above $33 or so, I’ll likely stop myself out of this short and take the loss.

Remember when I told you guys that bitcoin would bounce between $500 and $800 or so for a while? A “while” in that case was quite brief. With $BTC bitcoin back near $1000 each, I’d start with only a small fraction of a full position in bitcoin if you’re still wanting to buy.

Interesting bitcoin $BTC segment on CNBC – Buzzfeed CEO sees an eventual price of $6000 based on the precedent of % of gold used as a store of value.

Samsung Forecasts Greater Earnings Decline Than Expected for the End of 2013 – Like I wrote about $SAMSUNG just last week, “Samsung’s selling commoditized products with little competitive advantage and no real platform of their own to grow upon, using Google’s Android operating system to run the Samsungtablets, smartphones and even smartwatches. Analysts have started seeing the margin compression coming and estimates are heading lower forSamsung. Like IBM, I continue to think this stock is a great short hedge against our many highflying tech long positions.”

Ten Best Investment Apps – “So we want to help all you would-be Warren Buffets this season and look at some of the investment apps.”  The App Revolution I got us positioned for years ago continues apace, eh?

J.P. Morgan to Pay $1.7 Billion To Victims of Madoff Fraud – Wake me up when they send someone from JPM to jail for having helped these Ponzi schemers.

Beware the wearable  – I agree with my colleague, Therese Poletti: Automobile $GM $F  technology will be the biggest theme at this year’s CES. Others figure it’ll be wearables.  The purest plays on automobile technology are the auto chip suppliers like $FSL and $TXN, by the way.

From John Hussman’s twitter feed – “Can’t rule out a scorching short-term finale to the Sornette bubble, but most investment managers are already all-in.” 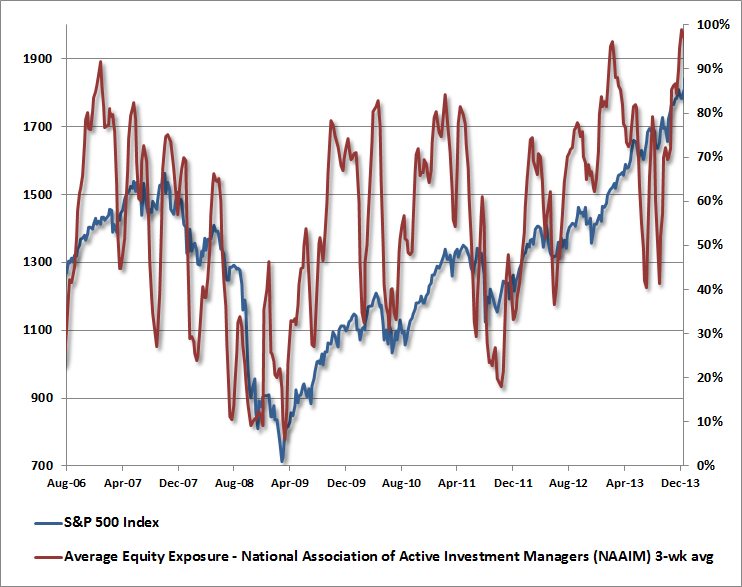 I’ll be back in a bit with more analysis, commentary, and what not.