Also, if you have a blog, are on Facebook or Twitter or otherwise have somewhere to link to Scutify.com, I’d sure appreciate it. It will help with viral marketing and with search-engine-optimization. Thanks in advance.

The markets have reversed today and I’m not trading either way for now after adding those two new positions yesterday, of common stock tranche buys in INVN and JDSU. Read Trade Alert – Starting a basket of Drone Revolution plays for more on that.

Gold’s continuing to rock since I last added a tranche just about exactly at the bottom of this chart. 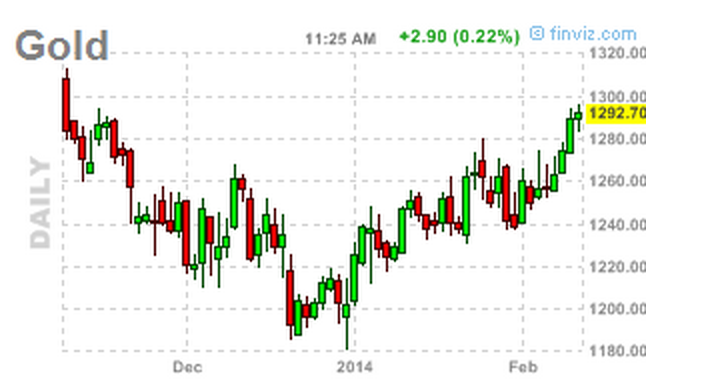 I’m holding all the physical gold coins and bullion I’ve bought in the last year.

In yesterday’sTrade Alert – Starting a basket of Drone Revolution plays, I noted that as of this week, Apple and Google, respectively, are the two most valuable companies in the United States? That means, I’ve owned the two largest market cap stocks in the US for more than a decade, having first bought Apple at $7 and Google the day it came public at $95 in the open market after it started trading.

With the Revolution Investing approach and a large part of TradingWithCody.com we’re trying to find the next Apple and Google like I did the first Apple and Google. I added a couple new names that have some parallels to my biggest — and the market’s current biggest — winners in this week’s edition. But let me be frank, as all my haters in my Markewatch blog comments section are apt to point out, that I’ve been wrong a lot along the way too.

For example, I remember about exactly ten years ago, I was also short RIMM because I thought that its platform would eventually succumb to better and more open platforms. That was when Apple’s main growth engine was its relatively still new iPod and I was writing about how someday Apple would some day turn the iPod into a cell-phone enabled “iMiniMacBookPro for Your Pocket”.

With the stock at $12, I was heading into RIMM’s earnings report already down more than 10% on my short position and feeling the pain which only intensified as I listened to the company’s earnings call. RIMM was on fire and absolutely blowing away every subscriber and profit and growth metric that Wall Street had for the near-term back then, I cringed as the stock hit $14 in after-hours trading. I moved to cover the shares I had sold short and it wasn’t until early after normal market hours opened that I was able to get out entirely of my short, with an average cover price of nearly $15 a share.

Certainly, I had some nice “offsetting” profits in my other telecom and tech long positions which were also on fire at the time, but any good trader/investor knows that limiting losses is key to long-term outperformance. And I felt sick over a 30% loss on that trade in just three months’ or so time, as I recall.

A couple years later I didn’t feel so stupid when I got a distressed email from a telecom analyst who had just realized that RIMM had passed AT&T in market cap at some point. The stock was now near $50 and on its way to $100. I eventually re-shorted as Android and iPhone finally created the exact dynamic I’d long expected to see the Blackberry platform suffer, as it lost critical mass. I even had RIMM as a short in Revolution Investing as long-time subscribers will recall and covered it one the way down before it eventually became the $BBRY stock everybody loathes today.

The other day I wrote what turned out to be a very controversial and widely distributed article called, “Twitter is doomed to a Blackberry-like future“. I wonder if I’ll look like and feel like an idiot for having written those words for the next few years as Twitter rides this ongoing bubble-blowing bull market and its own momentum to wild new highs and valuations for shareholders.

To be clear, I’m not short Twitter and am not looking to short Twitter anytime soon if ever (I’ll see where the stock and the company’s roadmap take us). And part of the reason why is exactly because of the lesson I learned when I’d shorted RIMM for the right reasons years too early.

Will Facebook triple again from here as it has in the last year and someday be one of the most valuable companies in the world? Will Twitter? Will the App Revolution stocks crash and burn after this bubble pops? Is there still more bubble and/or simply higher valuations for most tech growth stocks ahead for the near-, the mid- and/or the long-term?

And there are Trader’s Deep thoughts for today. See ya in a bit at the chat. And in ten years.

Everything You Need To Know About Cryptocurrencies
Best Way To Hedge, How To Safely Trade For A Living, Favorite CNBC Personalities, And More
Who's scared, Cramer turns bullish on TSLA, Silver industrial uses, & more
Cody Kiss & Tell: Tech exposure, Silicon Valley Mood, Gold and much more
As for the broader markets, the bears and shorts are all...