On Friday, I bought some index puts on the SPY and IWM and just minutes afterward, the markets tanked on escalation of tensions in the Ukraine. Over the weekend, I read global coverage of this crisis, including watching Russian Television (RT) on the Internet and reading bloggers and news sources from the US, Europe, Asia, Australia, Russia, Ukraine and anywhere I else I could get my hands on. 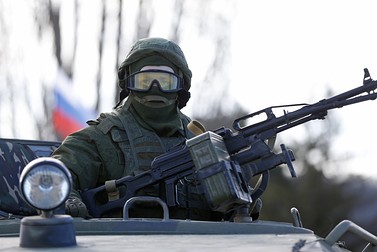 First off, my heart goes out to the people of any ethnicity full of fear in the Ukraine and Crimea right now. My stomach drops regardless of my stock positioning and trading when I read articles like this about the Ukraine/Russia/US/EU standoff.

Here’s my recollection of how this conflict has started and escalated to the point where the term Cold War has come back to the headlines.

So under that guise of “providing help to the democratically-elected government of the Ukraine” Russia and Putin have moved in and taken over some of Ukraine’s most important land and sea property. Meanwhile, Obama, the UN and all the other leaders of the US/EU have been told by their corporate banking-military-industrial-complex puppet masters to act like they are going to do something about it if Russia moved in. They now have no idea what to do since Russia and Putin called their very public bluff.

Who’s right? I’m ashamed of all of the US/Russia/EU/Ukraine governments. The only people who are right are those in the Ukraine itself who are working, struggling and trying to provide for their families and support their own communities. The rest is economic and political theatre with very real world and very tragic consequences.

What’ all this mean for us and our portfolios? A couple weeks ago in the TradingWithCody Weekly Live Q&A Chat, I had this exchange:

Q. You acknowledge that we’re in a bubble that keeps inflating. What “red flags” will you be looking for to indicate this “bubble” is about to pop?

A. Absolutely insightful question as you framed it. Thank you for asking it. Every cycle is different and this one is “more different” than any other, what with all the globally-coordinated movement to maximize corporate profits and the ongoing 0% interest rates and QEInfinity and etc. Some signs that I will be looking for include:

See point number three there? This is not a bullish development for this ongoing economic corporate boom cycle and the bubble-blowing bull market on which we’ve been riding. I certainly am not about to call for “The Top” here and I still think the forces that have created this bubbe blowing bull market are still in place ands are likely to take us to a serious blow-off top before the bubble truly pops. But for the near-term and/or mid-term, this “New warfronts between developed economies in addition to the ongoing and escalating global currency war they are already engaged in” is likely to be part of an impetus for putting some fear and even panic back into the stock market.

As you know I’ve been raising some cash and have been trying to prepare for a pullback like this in addition to having bought those index puts on Friday. Nothing’s changed in that regard. I’m ready for this pullback and will look to put some of that cash back to work over the next few days or weeks, depending on how the markets and fundamentals change and the pitches they present.

I’ll be out most of the trading day today, but I will be sending out a full update with ratings for each and every holding in a Latest Positions post tonight.

In search of other plays on the "Most Disruptive Technology Ever"
The Great Cryptocurrency Poll
Trade Alert: Two more trims AND Why cryptocurrencies like bitcoin are about to crash again
Must-reads: Twitter-flash crash, FDR and gold, and more
FB, INTC, MSFT, Bitcoin and other important tech stuff