One trade to tell you about this morning. I’m buying about a 1/5 tranche in Ciena, which is currently my smallest position in the long side of the portfolio. Still will be one of my smallest positions and I’ll be looking to add another tranche to it in coming days or weeks.

One short-side trades I’m still considering, but haven’t pulled the trigger on: BKS – Barnes & Noble, as I think its the next Sears/JCP kind of retailer to collapse.

I warned you. Over and over, frankly, and consider this yet another warning. Stay away from hyped-up penny stocks, which so far this year has meant specifically staying away from the marijuana weed pot penny stocks, most of which even at this moment, are still up many hundreds of percent in the last year. Most of these Over-The-Counter weed penny stocks are just vehicles for their insiders to sell shares to retail investors caught up in the hype of the Legalized Marijuana Revolution. 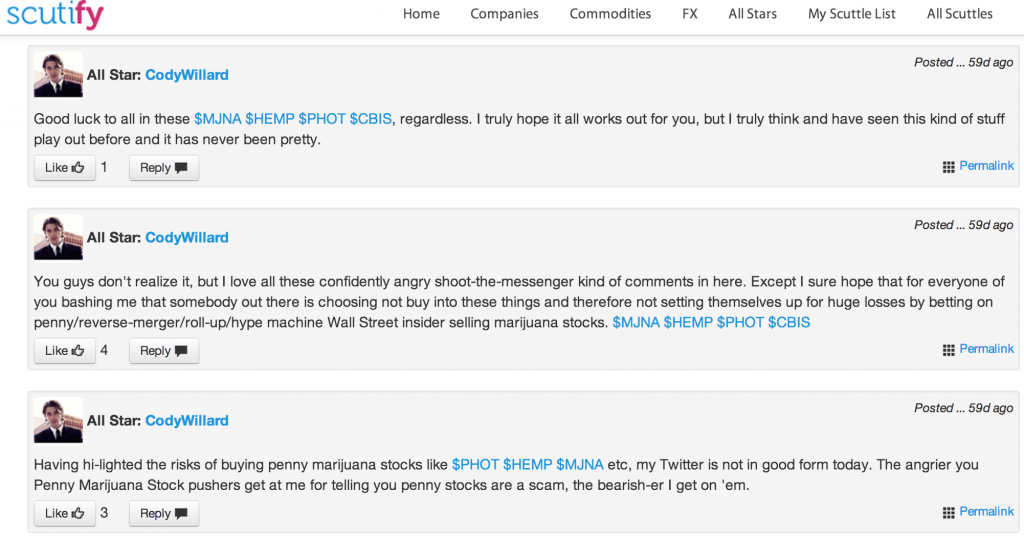 Let me re-explain. I’ve repeatedly highlighted Growlife as a poster-child for this game in which the retail investor is always the mark, and late last week, holders of PHOT woke up to news that the SEC had finally gotten off their butt and was suspending trading in this stock while they investigate the company’s stock trades “because of questions that have been raised about the accuracy and adequacy of information in the marketplace and potentially manipulative transactions in PHOT’s common stock.” I have certainly been one of those who have raised questions about the accuracy and adequacy and potentially manipulative transactions in PHOT’s common stock. I’m glad to see the investigation, even coming way too late for all those retail investors who got stuck with this now suspended stock.

In just the last two months, here are a few of the articles in which I asked those questions about the weed penny stocks and Growlife PHOT specifically:

Talk about popping people’s bubble. I stirred up a lot of anger and vitriol from my readers of The Cody Word with those articles. Here’s a sample:

“Bring some solid information or write about something you actually know about.  As you said you are not willing to do the research. You are basically the same as all of the pump and dumpers on Y-Hoo finance.  Shame on you.”

In one of those articles, I wrote in response to all that vitriol I received that, “I sure hope that for every one of you bashing me, that somebody out there is choosing not to buy into these things and therefore not setting themselves up for huge losses by betting on penny/reverse-merger/roll-up/hype-machine-Wall Street-insider-selling marijuana stocks.”

I still hope that was the case. That some of you heeded my advice and got out of and/or avoided these penny stocks before they started crashing and getting halted. Always remember that emotions are the enemy of successful investing and trading.

I finally did a Marketwatch article and Cody Underground podcast specifically explaining how the fundamentals and financials of Growlife, no matter whether insiders were doing something wrong or not, that “all that will spell big losses for PHOT‘s shareholders as that reality plays out.”

So here we are today, and I have no idea nor does anybody else have any idea of when or at what price Growlife’s current retail shareholders will be able to get out. Let this Growlife suspension of trading which has left even those retail “traders” who were explaining to me that they were going to “get out” of these hyped up penny stocks “before” they crashed again be a lesson to any of you who think you are nimble enough to play that Greater Fool’s Game. You can’t get out of a stock that’s been suspended.

It’s hard enough managing your risk in big cap stocks that trade on major exchanges. Why anybody would want to play this hyped up penny stock game is beyond me. Look, if you only have a few hundred or a few thousand dollars to invest, it’d be better to buy a few shares of a real stock like Lindsay LNN, Intel INTC, or even Facebook FB than to buy thousands of shares of some OTC penny stock. See above article for proof.