I headed out on Friday morning to Baltimore to surprise Dr. Jaimie Shores on his 40th birthday, and I couldn’t mention it here on TradingWithCody because Jaimie is a subscriber and reads most everything I send out.

I’ve written about Jaimie, who’s been an inspiration and best friend to me since we first met at the University of New Mexico in the mid 1990s. He, along with his wife Darla, are classic examples of how you can become anything you want in this country of ours, even these days, with enough hard work, smarts and dedication. They’ve goth been through several fellowships and post-graduate programs to further their training and now each are leading and globally respected doctors in their respective fields.

I had a great time in Baltimore and more importantly, I was blown away at the gentrification and overall improving economic thrust that I saw and felt in my time there in the city.

Dr. Shores asked me a lot about stocks and investing. I asked him a lot about hand transplantation, human organ regeneration and much more. He said that within fifty to a hundred years, we’ll be able to grow a replacement hand for someone who loses their own using their own genes. Now that’s a revolution worth investing in.

At any rate, I’ll be back in full swing hitting it hard tomorrow and I have a few trades I’ll be making this week and next. Stay tuned.

And your deep thought of the day — comes from Fort McHenry’s Francis Scott Key museum in Baltimore: 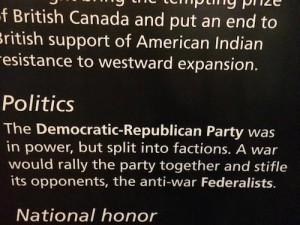 Nothing’s changed, has it? The Democratic-Republican Party is still in power and still rallies together to stifle anti-war Americans.

The write up in the pic refers to the 1812 war but could refer to Iraq Afghanistan Iran Ukraine etc. The Republican Democrat Regime must be destroyed or we are doomed to wars forever.