In our continued pursuit to bring Scutify to all platforms and devices we have launched our BETA app on Google Glass. With your Google Glass you are now able to get the latest Trending/Popular Scuttles straight to your glass. Other cool features such as viewing your Scuttle List, Company Information, Placing Trades and more will be available over time. But for the time being if you own a pair of Google Glasses try out our new Scutify Glassware app now – https://scutifyglass.appspot.com. 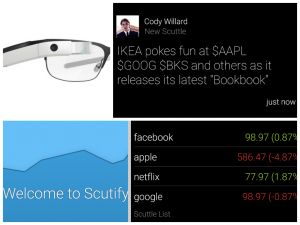 The more times I get asked about the $BABA ipo, the more bearish on $YHOO I get. I think $BABA‘s gonna pop a bit the first day after it comes public, but that it’ll likely struggle to live up to the extreme amount of bullish hype that’s built up around it over the last year as they’ve hyped/marketed their IPO.

Feet to fire, I think the $EURUSD is about to flip itself back to rally-mode, exactly because sentiment around it is now so confidently bearish. That is, expect strength in the Euro for the next couple weeks. But to be clear, I’m just giving you props for catching this huge $EURUSD collapse over the last few weeks/mo’s and I’m not even considering making any such trades myself. I’m just an observer/economist speaking in this case.

A currency I do accept for payment at TradingWithCody.com is $BTC bitcoin and methinks it might be about to rally back toward four digits again ($1000) if the hype around it into these bitcoin funds coming public builds. Something to consider for the more speculative amongst us. But all currency trading including owning $BTC is speculative in nature of course. http://online.wsj.com/articles..

$AMBA and most of the other Wearables Revolution stock picks from my latest book (email us at support@tradingwithcody.com if you want a copy of any of my ebooks) are on fire. Much more room to run over the next year or two or five in $AMBA …but tell me this one month $AMBA chart doesn’t make you a bit acrophobic? Might need to trim it down just a bit soon after this 40% straight up run. 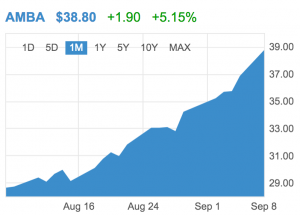 There’s really only one thing that will drive Apple’s stock tomorrow as they host their Apple Event — the new operating system called iOS 8 that all Apple’s new gadgets will be running on.

The iWatch? Yes, that’d be cool, but it’s not the catalyst for the stock after the event and onto into next year.

A slimmer, bigger iPhone (maybe or maybe not called “iPhone 6”) and a bigger iPad screen? Yup, that’ll be cool, but if that’s all that Apple unveils tomorrow, that stock will be down 5% by the close and likely be in a funk for the rest of the year.

Notice that the iPhone and the smartphone itself has hardly changed since they first came to market six or seven years ago? Smartphones have gotten slowly slimmer and their screens have gotten larger since the first iPhone and even before that as the iPod evolved over time too. Bigger screen, slimmer body? Big deal.

Apple’s got to catch up to Android’s latest operating system. I’d include Windows in that too, as the latest Windows Mobile operating systems are much more functional and fun to use than the current iPhone. But let’s stick with Android since Windows phones are many years away from ever becoming mainstream much less hitting critical mass like Android and iOS have.

What is the key differentiator that Android has over iOS right now?

By far the most important differentiator for Android right now is “Widgets”. I love using widgets on my Android tablet and smartwatch because that way I don’t ever have to even open up the apps that I use most unless I want to dive in deeper to what I’m being shown on those apps’ widgets.

That is, with Scutify widgets on the home screen of my Android-based Samsung 11″ Galaxy tablet, I can see my entire stock portfolio with real-time prices constantly being updated or the latest Facebook updates from friends.

Likewise, on my fully functional Android smartphone watch from a company called IconBit I can see my latest emails in my Gmail widget on the home screen or real-time sports scores.

Less tapping, less scrolling and more relevant information in front of my eyes every time I glance at the home screen is a tremendous advantage. When I go back to my iPhone and iPad, I’m almost saddened by their little icons as well as their static home page and backgrounds.

Feet to fire, I expect that Apple’s slimmer, larger-screened iPhones and iPads and a somewhat limited smartwatch that won’t be called “iWatch” will be rolled out tomorrow. And I expect that the new iOS operating system includes some seriously cool upgrades including live Widget-like boxes on your home screen and other “live” features that integrate iCloud, messages, emails, phone calls, stock quotes, sports scores, etc.

I’ve owned AAPL since it was at a split-adjusted $1 per share, but if I didn’t own any, I’d look to start building it sooner rather than later. And stick with Google too.