Google Glass supplier Himax HIMX up again, and starting to get parabolic. The HIMX chart is starting to remind me of GoPro supplier AMBA Ambarella’s chart frankly. Probably need to take a 1/5 profit on each to be disciplined. So that’s what I’m going to do – I’m trimming a tiny bit of both HIMX and AMBA today to lock in some nice profits. Selling some of my HIMX call options and keeping some of the call options plus the common stock. And I’m going to trim about 1/5 of my AMBA common stock. Discipline.

One of the reasons you subscribe to my service is that because we’ve done a good job over the years of keeping you focused on headlines and trends that do matter while helping you to avoid getting lost in the noise. I’m not sitting around trying to game or read or analyze the latest jobs reports or housing sales reports or GDP reports and so on. Because so much of that and what the mainstream media and traders focus on is just noise. But there’s a time and place for everything and right now, with the huge rally that the dollar has put on vs. every other currency on the planet, it’s time to focus on the dollar. 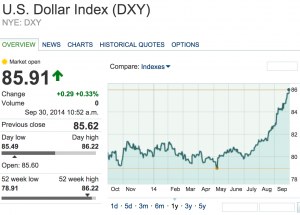 A nicely done brief overview of the dollar action can be seen in this video from Kiana Danial.

The dollar is on fire and it has been for months now which means it’s going to start impacting economies, earnings and expectations around the globe. The impact of of the dollar’s big moves could be a short-term phenomenon, but if the move continues with this kind of momentum and magnitude, it will start to have mid- and longer-term economic ramifications (most of which are good for Main Street, but not so good for global conglomerates or Wall Street per se).

An old mentor of mine, now Chief Market Strategist at Rosenblatt Securities, Brian Reynolds, taught me long ago that when it comes to currencies and rates that it’s not necessarily the direction of the move that counts, but the quickness and the magnitude of the move that matters. Another old mentor of mine, Jim Rogers, writes in his book and used to explain to me on TV that currency trends usually last much longer and go much further than most other markets’ trends.

Plenty of economists/analysts (me included) have been more focused on the possibility of the dollar losing its long-term “reserve currency” LINK designation around the world. Russia definitely wants a new currency, but China’s own currency wishes are more muddled as they own so many Treasuries and other dollar-denominated assets that appreciate with the dollar. Not to mention a stronger dollar helps them export to the US cheaper/more profitably. The lucky/better professional currency traders have actually caught most of this dollar move higher as the breakout at about the 82 level forced them to cover and/or go long the dollar.  But just about every doomsday permabear who might try to trade currencies has been short the dollar and still is.

The primary driver of this extended recent dollar rally has simply been that the US Dollar is the least dirty shirt in a laundry basket full of stinky clothes. The Euro and the EU economies are struggling to maintain growth. Japan’s markets and economy is suffering from inefficient corporate earnings policies both from the government and within the local corporations  there.

You can try to game it a few ways. In general, the stronger dollar trend should be a headwind for many of the megacaps which have large foreign exposure. Dollar strength probably won’t hit this quarter in a big way, but it will impact in the guidance and consensus earnings estimates for 2015 for export-heavy companies. Likely beneficiaries of a stronger dollar include retailers, tech, consumers and savers.  Boeing is another name that comes to mind that might get hurt from a strong dollar. Boeing BA has the tailwind of war but the competition from Airbus plus the strength of the dollar vs the Euro that Airbus uses has got to hurt the company’s near-term prospects. Is it enough to get a warning from the company in the next few months, I’m less than certain.

So what’s the trade here? Well, take a look at the Fidelity Export and Multinational ETF, with the symbol FEXPX. The fund “seeks long-term growth of capital by investing at least 65% of the fund’s total assets in securities of US companies that are expecting to benefit from exporting or selling their goods or services outside the United States.” And we have our trade, yes? I would expect that we’ve got an opportunity to make a Revolution Investment kind of hedge here that could give us some nice gains on the downside even if the broader markets and most of our individual stocks that we own are poised to continue to bubble higher.

I’m going to cover my IBM short, and replace it with the FEXPX in the portfolio. IBM’s still got their aggressive accounting methods and legacy technology issues to deal with, and  the stock is one of the few megacap tech stocks to have not participated in the bubble-blowing bull market over the last couple years while we’ve been short it. But I think we can get a bigger bang for our buck trading out the IBM short for the FEXPX short, so that’s what I’m going to do. I’m removing the IBM short position entirely and starting to scale into a short position in FEXPX, which means that I’ll profit FEXPX heads lower.