SELLING THE LAST OF GTAT FOR MORE THAN A DOUBLE

Well, I’m selling all of my $GTAT and moving on entirely from it for now. The stock is now up 150% in today’s trading. Let’s take the gain — what a homerun overnight, eh? That’s why we do the bankruptcy BK trade every once in a while.

Here’s some more info on the reasonings behind the $GTAT bankruptcy, but nothing to explain the horrendous handling of this filing’s timing and letting the stock trade normally Monday morning before they filed. “The final straw for GTAT was when AAPL withheld a final milestone payment of $139MM – w/o the money GTAT was forced to file for protection.” WSJ http://goo.gl/EXlcNE

I’ll re-evaluate $GTAT after it finishes with the actual BK process so I can analyze exactly what I’d own as a shareholder. I don’t think you can do that yet their recent filing. http://bit.ly/1q4o5PI

Samsung Electronics warns on growth expectations as it forecasts 60% fall in quarterly profit (it could have been worse frankly, probably will get worse). Guess who’s been short $EWY as a way to short Samsung in the US and predicting the downfall of Samsung? That’s right, we have.

Details include specifics that are exactly what we’d expected when we first put on our short EWY South Korean ETF to get exposure to Samsung’s peak and now, subsequent fall. “The world’s biggest mobile phones and TV maker said it expects an operating income of 4.1tn won ($3.8bn; £2.5bn) for the three months to September. That is below analysts’ expectations for earnings of 5.2tn won. Samsung’s mobile division, its biggest business, has been struggling to maintain its dominance against rivals such as $AAPL and Chinese smartphone-makers Xiaomi and Lenovo.”

As I wrote back in January 2013, “Samsung’s products, especially the Galaxy S III, have been selling like gangbusters, but not all reviews I’ve read are stellar. At some point, it’s inevitable. The Samsung wave too will crash. Hard. And the risk to a manufacturer like Samsung is that when that tide changes, its margins can plummet. Do you have a Samsung ecosystem? Or an Android ecosystem? Isn’t Google the platform play that I preach about so much. Platforms create revolutions. Revolutions make great investments. Hardware vendors with nothing to lock you in to their brand do not create revolutions.”

I’d also explained at the time that Samsung was “riding a wave of popularity and sales that’s reminiscent of Nokia in 2008. Or of Motorola in the Razr heydays. Or of Research In Motion when everybody wanted a BlackBerry. But wait a minute. How’s Nokia doing today? Or RIM? Google swooped in to play white knight for Motorola last year — for a fraction of the price the company was valued at in its Razr prime, and it remains to be seen how quickly (if?) the handset manufacturer can be turned around.”

So here we are and I hate to say because South Korea’s economy needs the earnings from Samsung, but I do think Samsung’s future is playing out exactly like the Motorola, Blackberry, Nokia cycle’s did as they fell from dominant to single digit marketshare over the years after they peaked. Thusly, I want to remain short the EWY and would look to build up short positions in the EWY and/or buy some long-dated puts on EWY.

Remember that when you buy a put, you’re buying a contract that guarantees you the right to sell 100 shares of EWY on a certain date at a certain price. The market makers offer put options that go out to January 2016 and January 2017. Looking at the prices of the available put options and premiums that you pay for those put options, I see that the cost-basis you give yourself on your short EWY position courtesy of those puts is just a little more for a slightly-in-the-money put than you would set by shorting the ETF outright. That is, you could go out and borrow 100 shares of EWY and sell them right now on the open market for $58.40. You could instead go out and buy a January 2016 EWY put with a strike price (the price at which you have a guaranteed buyer) of $55 for $4.50 or so. That would essentially give you a cost basis of $50.50 and you’d need to see the stock drop below those levels to guarantee yourself an opportunity to profit. 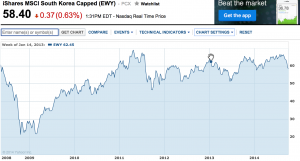 We entered our short position at $63 back a year and half ago and it’s been a good hedge as well as having finally kicked in some nice profits in the last month, as EWY has dropped 12% in a straight line. 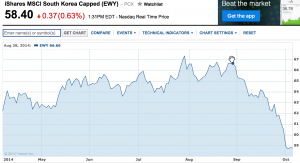 All that to say that over the next few years, EWY could likely headed back to where it was before Samsung’s recent mobile dominance came into play in the last, say, four or five years. So let’s give it a target of $25 on the downside over the next three years. Let’s put a target or $40 on it for the end of the next year on its way down to the $25 target. So if you expect that the stock could drop to $40 by next January and you’ve got a $55 put that will expire then, that put would be worth about $15. You paid $4.50 for it, so that would give you a profit of about 200%.

I’m going to buy a tiny position those very January 2016 EWY $55 put options in the next few days, bidding slowly for them.

Samsung’s in big trouble. Our job is to try to profit it from that big trouble with a very risk/reward-friendly way. Rock on.