No trades for me today. HIMX down big in the last few weeks and now below where we’d been initially buying it. It’s by far my smallest position right now but I don’t want to add to it just yet. Google Glass isn’t somehow about to take off tomorrow but over the next few years, HIMX is in a prime position to sell big units into Google Glass as it rolls out into the mainstream. Like Invensense, there is execution risk in this company, as they have to deliver and aren’t proven yet. All of which is a good lead-in to today’s report.

How do you know when to sell a stock?

There’s no set answer to this question or just about any other question you can ask about the markets. Personally, I’ve always made my biggest profits by finding the most Revolutionary Investments I can find and then holding onto a core position in them for years as the companies grow by changing the world we live. I let my “winners run” for years upon years as long they continue to execute and follow their revolutionary road maps.

Let’s take a look at the current positions in the Revolution Investing Model Portfolio (which has a lot of the same positions that I own in my personal portfolio) because it underscores the point I always make about owning these stocks for longer than most traders, technical analysts or pundits would ever consider. 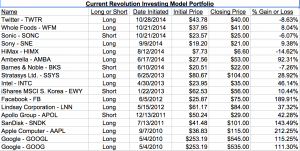 You see clearly that my biggest winners are those that I’ve held the longest. Over the last four years of publishing Revolution Investing Newsletter with the WSJ and Marketwatch, I’ve actively culled our losers and occasionally have even sold some of our winners when I thought the story had changed. I didn’t let the stock price dictate to me when I’ve closed out positions, rather I’ve sold stocks like DDD back when we had gains on it because I thought the management there had gotten too promotional and overpromised what they could deliver fundamentally. I sold INVN for a loss because I thought management had mislead us into last quarter and their new gross margin guidance changed the potential upside returns and added too much risk for my liking.

I personally don’t use “Price Targets” at all and find the concept to be a distraction. See, we’re trying to find Facebooks and Apples and Googles and Sandisks and Ambarellas (maybe, still early in this one) and to own them for a very long time as they revolutionize the world over years or decades. If I’d sold my $AAPL when it hit a “price target” back in 2004 after I bought it in March 2003, I’d have missed the last 5000% or so of its move that I rode while I was running my hedge fund from 2002-2007.

A lot of traders spend a lot of time trying to apply this Revolution Investing concept to a time frame that’s much too brief. That is, they look at, say, the burgeoning Wearables Revolution and plow into the penny stocks, pink sheet stocks, and any company that says they are in the “Wearables Business.” They’re hoping that others get the “Wearables bug” and that a greater fool will buy them out of the stock when it gets hyped up ever more as the press around Wearables and the new Apple Watch grows. The same cycle has already mostly played out in the “Legalized Marijuana Revolution.”

I say slow down.

Looking out five years, the one thing that is clear is that Wearables are going to be huge with Apple and Google leading the way once again. Ambarella and Sandisk and Sony are second-tier wearables plays. People will be Tweeting and reading Twitter and Facebooking ever more in the next five years with the help of always-on Wearables which makes them wearables derivative plays.

Yet most traders and investors I know are desperately trying to find Wearable “plays” like Vuzix VUZI and KOPN and DGLY, which might or might not ever actually catch any traction in the Wearables industry.

Some expect that they’ll still own these lowest-tier Wearables “plays” for the next five years like I do with my own Wearables stocks. Others expect that, like I said, the hype will lift all Wearables boats and they’ll get lucky enough to catch a short-term pop into the hype.

HIMX is by far my riskiest play on the Wearables Revolution, but they have at least established themselves as a primary supplier to Google Glass. Still risky and has come down hard recently as Wearables hype didn’t play out as quickly as the momentum folks were hoping.

Really though, the key is to stick with real Revolutionary Investments that are clearly going to benefit from a trillion dollar new industry. We’re not looking to gamble on gaming the hype.

We’re trying to find stocks that will return 300% or 5000% or more as they change the world. We sell them when they fail or when we want to reduce our overall risk exposure to the markets as I have done over the last few weeks too. I don’t have any interest in drawing lines on historical price charts for my stocks. I don’t have much interest in trying to game the next 10-20% move in most of my stocks.

Two option trades for Txgiving week
Get one month of TradingWithCody.com for free for each one of your referrals who signs up...
$GOOG, $AAPL, $INTC and $MSFT: Predictions and platforms
Cody Kiss & Tell: Bailouts, Fed playbook, market direction & more
Revolution Investing links: Economists revolt, G-20 cluelessness, how the best tech trader I know is...