Don’t forget to join me for this week’s Live Q&A Chat at 2pm EST at https://tradingwithcody.com/chat.

Markets rebounding, but they are still off to ugly start for the year.

Before the open yesterday, I wrote: “I think I’d rather see one more big 300+ down day that would give me the chance to sneak in and do some buying. Those whoosh downs last year were terrific buying opportunities…will the next whoosh down be another buying opp?” I did a tranche buy of some Synaptics near the bottoms yesterday into the ugliness but of course now kick myself for not having scaled into more when $DJIA was down 240 yday.

Awful attack in Paris at satirical newspaper. Prayers to all involved. Unfortunately, part of being in the finance business is having to deal with this in an analytical way too.

Quote of the Day from @BrianGallo quoting Peter Thiel for part of it: “‘Transformational companies greatest earnings are 10 years in the future’ -Peter Thiel. The Street is looking for the next 10 minutes…. And therein lies the opportunity.”

I so want the new $SNE Sony Walkman! “Sony is trying to make the Walkman cool again.The company unveiled its Walkman NW-ZX2 high-definition music player this week at the 2015 International Consumer Electronics Show in Las Vegas. Cost, $1119.” http://abcn.ws/1wnW9KP #wearables As for the stock, I still think the Yen and its content business and the co’s wearables potential are the main reasons to own it. Audiophiles and audiophile wannabes like me pay $500-1000 for headphones and I’d love to hear the higher-quality sound that the new $SNE Sony Walkman purportedly delivers. I spent $3k building a 1990s McIntosh stereo system in my Scout (which is unfortunate because it drains so much battery that you can only listen to it with the engine on and a 1976 International Motors engine is loud and vibrates the whole vehicle.) Since I’m married now, I probably won’t get the new Walkman at all.

Looking at charts right now, I’m reminded of what I’ve been writing about for years, with a hat tip to our old friend Brian Reynolds, http://rblt.com/research/macro… used to tell me, that it’s usually the speed and magnitude of the moves that’s more important than the overall trends themselves (at least sometimes). Anyway, from the 1 year $TLT to the spikey and dislocated a year $DJIA to the crashed 1 year $OIL chart to the spikey 1 year $USDEUR charts, there are some red flags.

I’m not a chartist, but looking at a 1-year $DJIA, I don’t see why it couldn’t bounce around 17000 for a while, or maybe just test the conviction of the bulls/longs by breaking 17k in a panicky sell-off. 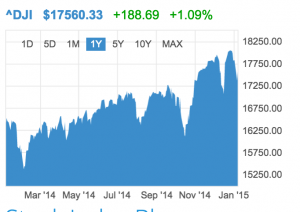 No easy answers, stay on top of things with me on TradingWithCody.

Special 40 page report: How to predict and profit from the Fed's bubbles and crashes
Trade Alert - Earnings updates and a solar trim
Growing up with civilization's entire knowledge base at your finger tips
Trade Alert - Covering Pandora and update on Yandex
Chat and random thoughts