I’m going to trim another 10% of my Ambarella position after seeing it hit yet another all-time high this morning. The stock is down a little bit now on the day but I am going to go ahead and trim it down just a little bit more as it is one of my biggest positions after the huge gains we’ve had in it. AMBA, at these valuations, is discounting a whole lot of continued growth and earnings boom for the company. Discipline over conviction.

Energy and oil’s collapse remains front and center. Maybe we get one final capitulation to put a short-term bottom into oil and energy stocks? I’m still waiting patiently before buying anything oil/energy related yet. Oil/energy has been a horribly underperforming for the bulls for the last: 1 Day, 1 Week and 1 Year.

Aren’t you glad you’ve been sticking with our approach of finding secular growing, revolutionary companies to invest in rather than trying to game cyclical industries like energy?

As I’ve said for the last couple months during this energy markets crash, energy supply is likely to climb this year no matter how far oil prices might fall over that time frame as all that new infrastructure that’s been built and/or being finished up right now comes on line. My point is that it takes time for all the new oil supply that was being built in 2010-2014 to come online and when it does, it is often much more plentiful at a lower set cost and it will take time for them to pull that new supply infrastructure off if they ever do at all.

US consumers use more than about 100 billion gallons of gasoline per year. Price/gallon will average about $1.25-$2.00 lower this year than last year. There’s also tens of billions of dollars that US consumers will save this year on lower heating and utility costs.

Here’s more on the subject of how oil/energy will/won’t affect US employment. “Deutsche Bank’s chief international economist, Torsten Sløk, says less than 1% of the total employment in the U.S. economy comes from the energy sector and notes that any layoffs in the oil sector resulting from the swift downturn in crude-oil prices will be insignificant.” Interesting.

Finally, I want to hit on our weakest performing long stock for 2014, Stratasys SSYS.

Stratasys is the best-run 3-D printing company. The stock is now down near 52-week lows, though it’s far outperformed the other major 3-D printing stocks like DDD and XONE. 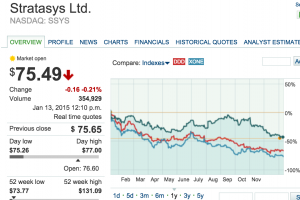 The biggest problem that the 3-D industry has faced is one of declining margins. Sales growth is still very strong, with most analysts estimating the overall industry growing 20-30% annually for the last couple years and the next few years.

Stratasys itself should be able to grow its topline another 30-40% this year on top of the 50% topline growth it showed this year. Stratasys earnings are expected to grow from $2.25 this year to about $3 per share next year, but that estimate has been edging down for awhile now, as analysts tweak their models to reflect the lower margins that are hurting the industry.

At 25x next year’s current earnings estimates for a company that’s growing its topline at 30-40% puts this stock right about in the middle of where it could trade over the next year depending on the margins. Strong margins will get this stock back to its $131 all-time high sometime this year. Weak margins will tank this stock to $50 some time this year.

I’m going to give the company one more quarter to deliver some stronger margins and if this next earnings report isn’t strong in margins with continued topline growth, I might have to cut my ties with this one. Stratasys will report earnings in early March, so I’m just sitting tight on this, the single smallest position in my own personal portfolio.

Trade Alert: The Only Streamer Focused on Sports
Ten Years Of Trading With Cody: Fear Is Now Greed
Latest Positions Part 1: TSLA, UBER, FB, TWTR, SNAP
Trade Alert: Nibbling some names as we analyze the cycles
Searching For The Space Revolution Stocks That Will Be Worth A Trillion Dollars (Trade Alert)