Don’t forget to join me for this week’s Live Q&A Chat at 2pm EST or send me your at support@tradingwithcody.com and I’ll include it and my answer in the transcript from the chat.

I’m doing a second tranche of the Financial Sector ETF $XLF puts, to help further hedge the portfolio in this time of crazy currency swings, crashing oil prices and other risks for the financials. I’ve reprinted the original analysis for why I’m adding these $XLF puts below, but in the meantime, I am adding a second tranche of $XLF puts that expire in June with $23-24 strike prices.

The fall out from crashed energy prices and the dislocating currency prices from Currency Wars are likely now the driver for the markets, the financial sector and perhaps all of our major geopolitical headlines for 2015. I’m thinking it might be time to buy some longer-dated puts on some of the…

I’m on the road to Vancouver for a business meeting and I’ll be back Wedesday night. We’ll have this week’s Live Q&A Chat at 2pm EST on Thursday this week, instead of Wednesday.

The fall out from crashed energy prices and the dislocating currency prices from Currency Wars are likely now the driver for the markets, the financial sector and perhaps all of our major geopolitical headlines for 2015.

I’m growing increasingly bearish on the financials again. Haven’t acted on it yet, still in homework phase, but methinks there are going to be some big Too Big To Fail banks like JPM, Wells Fargo, Citigroup on the wrong side of the currency dislocations we are seeing this week and even with Russia too for the last few months.

Here’s the latest Cody Underground Podcast that I recorded this morning as part of my research on the Currency Wars and yesterday’s dislocations: Cody Willard and John Authers, my old editor and mentor, John Authers, who writes the Long View and other columns for the Financial Times, with explanations and analysis of the Global Currency Wars, Central Banks and how it affects you at home.

This could be a rough year for the big banks as energy prices crashed, currencies have dislocated and we’re just two weeks into the new year.  The banking industry has been on fire since it failed in 2008 leading to you and me bailing it out to the tune of trillions of free welfare dollars and higher-risk accounting standards adopted by the regulators for the last six years.  Look at these charts for XLF one of the largest banking sector ETFs from 2009 to today: 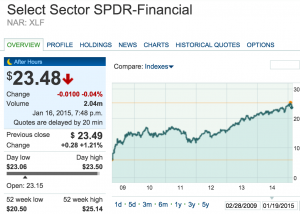 I’m thinking it might be time to buy some longer-dated puts on some of the Too Big To Fail banks while they’re near these all-time highs in early 2015.

I’m applying two of the lessons I learned from having tried to short the banking sector in 2011.

2. But when there are major price dislocations in major global markets built upon leverage and leveraged securities, there is usually some time to act before the market realizes the new risks in the financial sector.

3. I’m using puts and/or putting a small stop-loss price above my entry price to avoid any major losses if my directional bet on lower bank stock prices in the next few months is wrong.

Meanwhile, banks also have leveraged bets on energy prices and securities that allow investors and hedge funds to bet on the direction of energy prices. Many traders inside those banks and many hedge funds and who knows what other kinds of funds have been making leveraged bets on energy — and many of those bets are about to come due to the tunes of billions of dollars of losses in the system that somebody is going to have to eat at some point.

Just as important as a potential catalyst for losses in the banking sector is the wild currency dislocations that we’ve seen in the last few months and especially this past couple weeks. 20% intraday rallies and crashes in currency markets are not what the banks count on to make their money. Many banks have been promoting “carry trades”, where you borrow money in one currency from one nation’s central bank and lend it out in another nation like the US for a few percent and then leverage the whole thing up….this stuff isn’t exactly risk-free and now’s when the pain and the losses start to work their way through the banking system.

Is some of the recent wild swings in currency prices a direct result of the public pressure to crack down on the ability for the same Too Big To Fail banks to rig the currency markets on a daily basis? Perhaps, but the reason for the moves is less important than the extreme increase in risk in owning those banks.

Most every time there’s a major energy, real estate, currency or other such price dislocation hits the markets in the developed world, there are banks and/or funds that end up almost taking down others banks and/or funds. Remember, LTCM, MF Global, Bear Stearns…listen to my podcast with John Authers for more history and background on those stories.

Tuesday morning, I’m going to step in and buy some midrange-dated $XLF puts and add it to the Revolution Investing Model Portfolio as a short hedge in case my analysis above is correct that there are more painful ramifications (and at the very least more risk) in the banking sector from crashed energy  prices and dislocating currency swings. I’ll buy some puts dated out about June 2015 with $25 or so strike prices. If the XLF and the banking sector blows off these new risks I’ll basically be stopped out of my short if the stock rallies past $25 by using these puts. I’ll probably remove it from the portfolio entirely if XLF does rally 15% of more away from my entry.