Barnes and Nobel BKS up 7% today on news that they’re going to spin off their college books business. Remember when the stock popped and later crashed when BKS announced they would spin off their Nook business? I think this is a similar set-up here.

That said, I’m about sick of the losses on this one… but I can’t fathom it’s going much higher. I’m going to scale into another tranche for this short, as we’ve seen BKS spike on news one week only to crash when the earnings/fundamentals actually show up. All that said, I am going to have to stop myself out of this thing if it runs much more from here. Remember that when a long position goes against you, it gets smaller, but when a short position like this BKS has gone against you, it gets bigger. Remember too that this position and most of our short positions also function as “hedges” to our broader overall net long portfolio.

At any rate, I’m adding another 1/4 or so tranche to my BKS short for now.

Apple has got a huge completely untapped watch market to tap into. Today’s smartwatches aren’t really that smart and they are not good at being watches either.

App and game are about to scramble to make their apps and games work on the Apple Watch. While there have been plenty of Android and other “smartwatches” on the market, I can tell you from experience that trying to use Android smartphone apps on your smartwatch makes for a brutal user experience. Remember, we are living in a App Revolution and the Apple Watch will bring the App-driven ecosystem to this form factor once and for all. Android smartwatch makers will benefit from the new focus from app and game developers on smartwatch form factor.

Take for example, the Apple Watch rival, “Pebble,” which recently raised $1 million in under an hour on Kickstarter. And there’s not a thriving app market for the watches either. I still say they look like kid toy watches.

I mean, compare those rudimentary, plastic-looking devices in the picture above with the picture of the coming gold Apple Watch below:

Pebble is a pebble in the Apple Watch (and eventually, Android smartwatches) ocean.

And here’s another fascinating tidbit about the Apple Watch that underscores just how big the Apple Watch and Apple really are. According to Josh Centers, from TidBits, Apple might next become the world’s largest physical gold buyer. Centers estimates that each gold watch will contain 2 troy ounces (62.2 gsmarrams) of gold, so if Apple produces just one million of the gold Apple Watches per month, he concludes that Apple will need 746 tons of a year — which is about 30% of the world’s annual production.

Will Apple sell one million gold watches per month in 2016? That’s the question. Is it possible? Certainly. And that makes for a potentially very big catalyst for higher gold prices in the next few years. Fascinating, if not entirely something I’d want to base a trading or investing decision upon.

As for the stock, well, there’s oh so much angst out there because “Apple was down two days in a row,” and “Apple has now pulled back 5% from its highs.” Even a few sellside analyst notes this morning highlighted the “pullback,” which surprised me because those brokerage notes are usually longer-term in nature.

I’d mentioned on Monday that I thought Apple looked like it could consolidate and/or pullback from the $130 range as the chart had simply gone parabolic (again). One reader asked me if I thought using a stop loss on Apple here was a good idea.

I sure wouldn’t put a stop loss on Apple as I’ve seen it pull back 20-30% or more at various times in the 12 years that I’ve owned it, which would mean I’d have been stopped out of it many times along the way, instead of just riding it to glory. If you want to own Apple, I think you should just resign yourself to the fact that you will have some “drawdowns”/pullbacks in the stock and prepare to nibble/scale into more Apple when that happens.

Another reader asked if I’d let you guys know here in Trading Deck the next time I think Apple looks like a good buy. I’m now going to be doing much more writing here on the Trading Deck (and you can always find me real-time on Scutify) and I’ll certainly let you all know if and when I see another possible good entry point in Apple. If you’re don’t own any Apple at all (or not enough Apple), you might want to just go ahead and scale into another tranche sometime soon and then hope/pray you get a 10-20% pullback in the stock sometime this year that you then use to scale into more. As I noted earlier, such pullback happen quite frequently over the years with Apple and I certainly expect such pullbacks to come along in years ahead too, no matter how well Apple executives or how much money they make us shareholders in the years ahead.

Scutify Chart of the Day – 10 year chart of Apple vs. Hewlett-Packard. 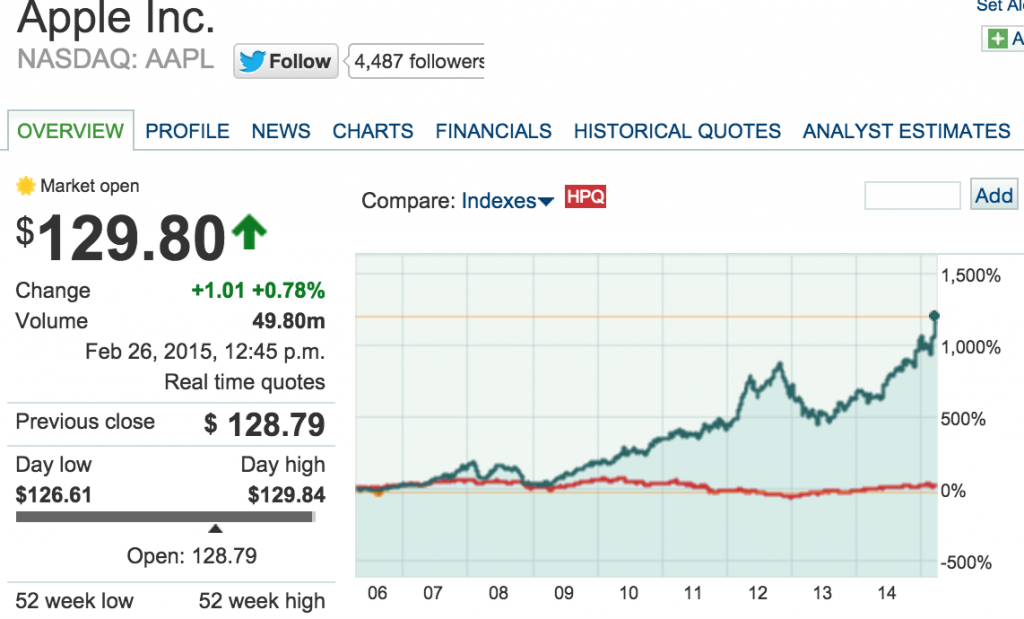 We could have made 75% holding HPQ vs the 2100% we have made holding Apple for the last ten years. I’ve actually owned Apple for a dozen years now while I don’t think I’ve touched HPQ as a long or short over that time frame. And I see no reason to change that stance now.

Trade Alert: Giga nibble (and remembering panic)
Trade Alert: In search of new names and an Apple round trip
Telsa-like intuition, The Roku of Food, Pot might finally be a buy and a Trade Alert
Trade Alert: Gold miner trim and two nibbles
Trade Alert: Covering lots of shorts and selling one long