One of the keys to Revolution Investing is to find a trend, theme or technological disruption that is driving new demand in the marketplace and therefore creating new valuations for companies that are positioned to benefit from said trend, theme or technological disruption. In hedge fund land, we call such an approach “Top Down” because you’re looking down at the broader economy, society and technologies to find your edge.

For example, when I’ve repeatedly explained over the last ten years that “Content is truly king” because you see the cost of distributing content has dropped to being negligible. People can “cut their cable cords” and use “Over-the-top” streaming apps like Netflix, HBO Go, Amazon Prime, Apple TV and so on because the costs of streaming such video over your broadband connection is negligible. You’re already paying for the broadband pipe so why not use it with broadband. Obviously, there’s a cap to how much you can stream on your wireless 4G account, and where there are “caps” there is investment opportunity too.

The wireless carriers are likely to start benefitting from people wanting to stream more per month than most wireless plans allow. Though if they’re not careful, other business models probably based on shared WiFi and/or WiMax technologies will get funded to compete at the caps. Verizon is the best wireless carrier and also trading at a relatively low valuation, so I’m also digging into it further.

We snuck in and bought Sony last year when it was trading in the teens and the main reason why was because Sony and its huge library of content is positioned so well  as I wrote at the time:

I don’t think we can draw a real parallel between Netflix’s business model of becoming the de facto cable company of the Internet with Sony’s wearables, PlayStation and content-is-king Sony Pictures businesses. But here’s the real kicker I’ll leave with you with for now. Netflix is worth $30 billion today. Sony is worth $20 billion. I expect we could see a triple in Sony over the next five years if they simply keep rolling out new Android wearables and figure out how to maximize the monetization of the content assets.

All of which brings me to my latest Revolution Investment: Iconix brands, with the Nasdaq stock symbol ICON. Iconix is mostly thought of as a clothing brand licensing company, with brands like Joe Boxer and Candie’s providing the bulk of the company’s revenues.

The company’s now turning its full focus on building the entertainment division, having recently acquired Strawberry Shortcake to complement its other content-is-king brands like Peanuts and Snoopy.

I first came across this company at that ValueX Hedge Fund Ideas Conference I went to in Vail last summer. I’ve kept an eye on the stock ever since and after seeing it fade lower all year and then getting hit hard after reporting a disappointing earnings a couple weeks ago, I dug in to see if we might have another Revolution Investing opportunity worth taking a risk on.

Iconix is down big over the last year. 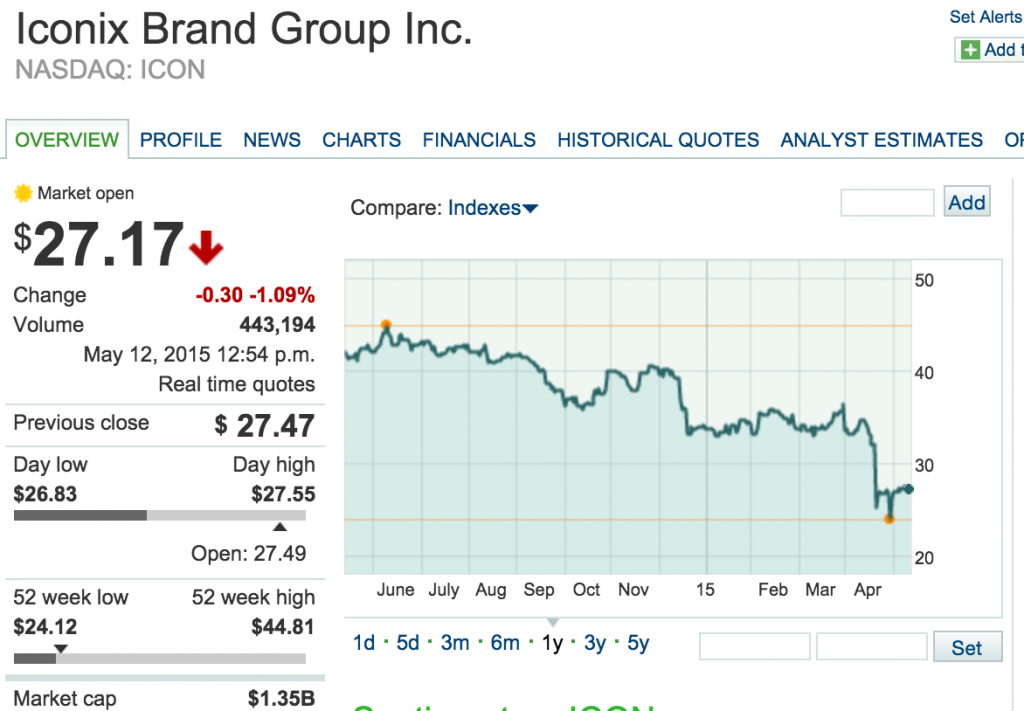 That huge decline in the stock price now has the valuation of this company trading at less than 9x next year’s earnings estimates. The results last quarter were indeed disappointing but the full year outlook is still in tact and there’s a huge upcoming potential catalyst that I’ll explain below. 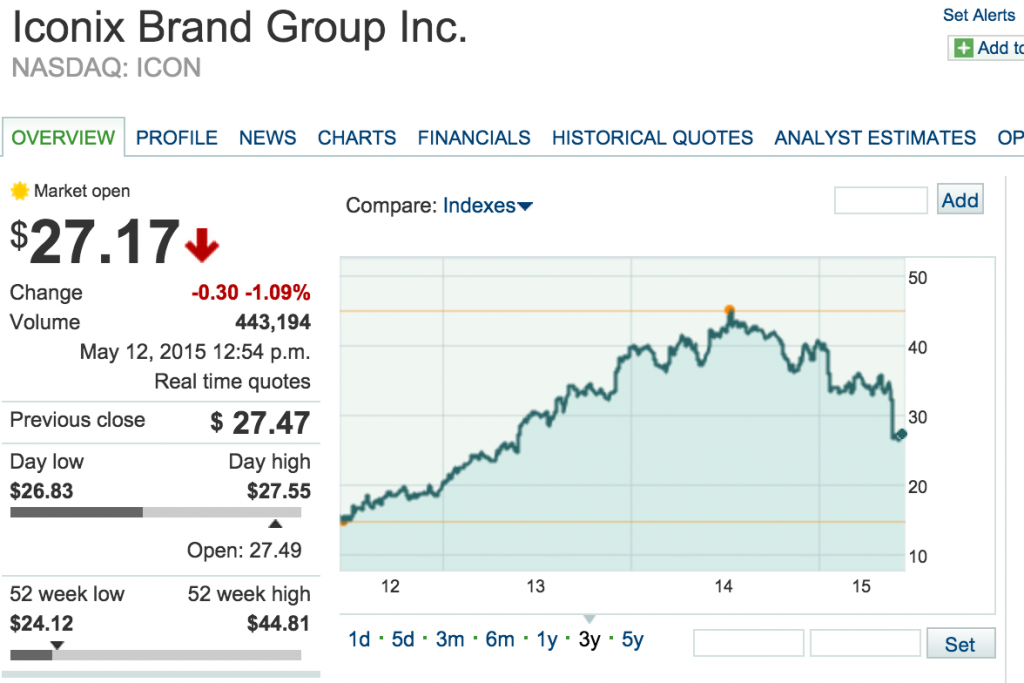 What’s the huge potential catalyst for this stock? The company has a Snoopy and Peanuts and has a new movie coming out in the fourth quarter of this year. Should the movie prove to be a blockbuster, there’s likely hundreds of millions of dollars of other licensing for content and merchandise for the Peanuts brand and Iconix.

I could see the stock back up into the $40s by the end of the year simply on valuation and content-is-king positioning for the company’s growing rotisserie of content-related brands. If the Peanuts movie takes off that would certainly help drive the long-term value of the stock too, as the annuity from more licensing demand for Snoopy, Woodstock, Charlie Brown and the gang drives higher. You can bet if the Peanuts movie goes blockbuster, there will be another few sequels immediately in the pipeline.

And what if the movie bombs? As long as Iconix’s main clothing brand licensing business remains steady, the stock is probably not got much additional downside. Though, as always, if the company fails to execute or otherwise screws up, any stock has big potential downside.

I’m not thrilled about the leverage on the balance sheet, as the company has $1.3 billion in long-term debt against $300 million in cash and long-term securities. But with the huge margins that come with a licensing business like Iconix is in, there’s more than $200 million in cash flow to support the debt and grow the company without too much concern anytime soon.

I’m not going to go crazy and make ICON a big position or me or anything. But I’m personally going to start nibbling on a first tranche position in some common stock, looking to make this a smallish overall position to hold onto for the next few years if the company executes. Otherwise, if the movie bombs and the other content-is-king licensing opportunities don’t grow for Iconix in the next three to four quarters, I’ll likely sell it and move on.