Ambarella breaks $100. For the last year or so, I’ve owned this stock as a pureplay on the Wearables Revolution and it’s been very profitable to do so, as I wrote at the time:

“AMBA is trading at 4x sales and at at 25x forward P/E. With topline growth of 20-30% per year for the last few and for the next few years, I’m willing to pay up a bit for this name as video capture and sharing is likely to become a bigger part of just about every connected device we use and own. The company does have nearly $7 per share in net cash, which brings the enterprise value / sales figure down to about 3x. That $7 per share in net cash gives them financial flexibility as does the cash flow that they spin off each quarter, but it’s not much of a cushion when you’re buying the stock at $28 per share as we are. Frankly, it’s a long way down to ‘cheap’ if the company doesn’t deliver more topline growth in coming years and over the next decade at least.”

Topline growth turned out to be nearly 50% over the past year, not the 20-30% most analysts were modeling. Even with a 300% move over the last 12 months, AMBA’s now trading at more than 8x sales though with their expanding margins, the forward P/E is still under 30x. All that said, this AMBA stock needs a rest at least at some point. Or not. Vampirella never needed a rest, why should Ambarella? I’ve lightly trimmed the stock a couple times already as it has quadrupled since I bought it and am holding it steady for now. 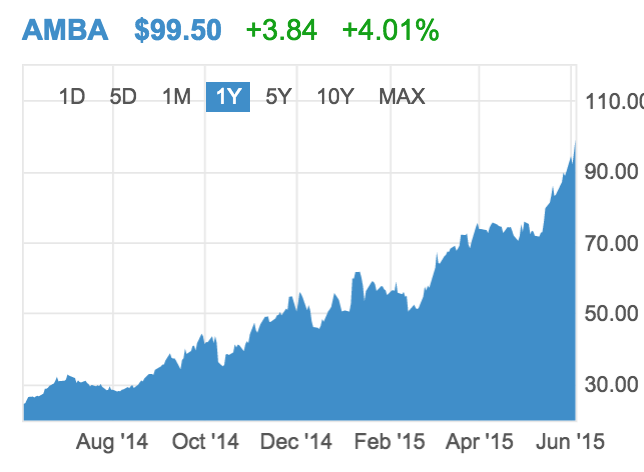 More importantly, I’m hard at working finding the next AMBA, FB, GOOG, AAPL for us, just like we found the originals. 🙂

PS. I’m going to be speaking at the upcoming MoneyShow San Francisco.

Be Careful With All That Coinbase Crypto Hype
Trade Alert: Google and the "tech bubble"
Updates on two stocks
More on the next market crash catalyst (and another reminder to sell while you can...)
Think about the message in this opening write-up...