Closing time, You don’t have to go home but you can’t stay here. – Semisonic “Closing Time” (Side note: It’s amazing what you can do by playing G-D-Am-C over and over again)

I’ve got a few trades I want to make, including closing three of our existing positions, so let’s jump right in.

Here are the three positions I’m closing and why.

1. South Korean Index iShares ETF (EWY) – I’ve been short the South Korean stock market via the EWY for the last 18 months, as a way of betting against Samsung. Samsung is, as I’ve said since I first shorted the EWY, the next Blackberry. Samsung’s margins and innovation depend on Google’s Android operating system. Samsung’s being squeezed on the low end by the Chinese Android smartphone companies like Huawei and Xaomi while Apple’s iPhone is killing Samsung on the high end. I still think Samsung’s got a lot of issues ahead of it, but when I see China’s stock market going nuts like it is — and I know that other markets like South Korea’s own could spike into this Bubble Blowing Bull Market going on worldwide in stocks — I don’t want to stay short the broader South Korean index. Samsung itself accounts for about 30% of the EWY, and I think Samsung could fall 50% or more in the next two to three years, but the South Korean stock market and economy seem more likely to boom in the next few quarters than to crash. I’ve tried to short the Samsung equity here in the US but the stock trades OTC here, and is unshortable. No puts available for SSNLF either. So for now, I’m covering the EWY and might look to put it back on at a later date.

2. Barnes & Noble (BKS) – B&N is splitting into two companies in August, and the stock has been rallying into that action. The company is separating its college book store business, which doesn’t suck, from the rest of its operations, which pretty much do suck. I want to short the “rest of its operations” when the companies separate, as retail book store outlets in strip malls and technologically-lagging tablet computers are not going to be growth industries again in my lifetime. Between now and August though, the stock could continue to rally, and I’m going to cry uncle here now with a 22% loss since we shorted it. I will be looking to enter a short position in the “rest of its operations” part of the company when they split. I am covering my BKS short entirely.

3. Yandex (YNDX) – I don’t like to own any non-US-based security very often and this Yandex company, based in Russia has been keeping me up at night. My theory was that Yandex was the ultimate way to play a stabilization in the price of oil, as a stabilized oil price would help stabilize the Russian economy and the Russian currency and Yandex could double in that scenario. Well, oil has stabilized but Russia and the sanctions that the RepublicanDemocrat Regime and some of the EU’s governments are putting on Russia don’t look to be going away any time soon. Indeed, this weekend, I read all about how Putin and Russia are likely financing a lot of candidates in the fringe EU countries. Who needs this kind of exposure? We don’t. I’m selling my Yandex, which is my smallest long position anyway, and moving on.

One other trade I am making personally. Ambarella AMBA has spiked another 22% in the last five trading days — and 15% in the last four trading days. I’d mentioned twice last week that I was holding my AMBA steady, but this parabolic move is making me dizzy, so let’s follow our playbook and trim a little bit here. 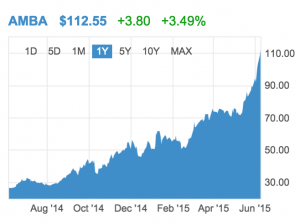 I am trimming 10% of my Ambarella stock today, which leaves it in the top 3 or 4 positions in my personal portfolio.

So yeah, closing a few positions today and that means I’ve got more money and slots for new ideas. I’ve got several new names I’m likely to add to the portfolio in the next few days and weeks.