Amaris doing very well…breathing on her own thru the trach for hours at a time. She responds to our voices and looks at us with her good eye (her left eye is a little underdeveloped) and smiles when we coo her and kiss on her. I got to do a bunch of cooing an kissing on her this weekend. 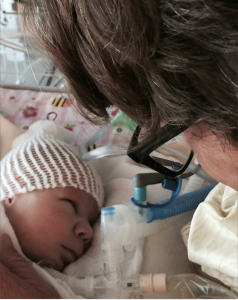 Many times I’ve noted that it’d be hard for the gold miners to be very profitable until gold gets above $1300 and that if gold dropped to $1100 that the gold miner stocks would be crushed. Now that we’re here with gold at $1100 and with the $GDX gold miner ETF at all-time lows, I sure wouldn’t want to be short he gold miners. A short-term bounce in gold of say 4% would take gold back to $1200 and that could take the $GDX up to $20 or above and that’s a 50% move from today’s quote.

I’m likely to add a few more real gold coins to my personal collection soon. In the meantime, I’m going to nibble on some GDX call options, using about the same amount of capital that I used to buy a few SLV call options last week. Both are tiny positions for me but both could give me a little juice if the contrarian set up kicks in and/or gold just rallies a bit off these $1100/oz levels it’s hitting today. I’m buying some $GDX Gold Miner ETF call options that will expire in December with strike prices from $14.50 to $15.50. Remember this GDX position, like my SLV call position that I bought last week, is a tiny position.

Perhaps the main takeaway I had from MC’ing and speaking several times at the Money Show in San Francisco last week, was that I learned so much about technology and biotechnology road maps and how scientific discovery enables both disciplines to flourish.

One note I made to myself repeatedly at the show was just how bullish everyone seems to be on biotech in particular right now but that nobody was excited about tech.

We can use contrarianism to our advantage and I think the lack of excitement about tech stocks in particular at a Tech/Biotech-themed Money Show in the heart of San Franscisco/Silicon Valley even as the Nasdaq is at all-time highs. Apple, Google, Amazon and Facebook, what I took to calling “The New Four Horsemen of Tech,” many years ago, are worth are now worth a combined $2 trillion dollars. Yet hardly anybody is excited about tech.

On one panel I sat on, most of the picks from the others sitting on the panel were a high-yielding dividend value-type play that included a Greek shipping company and several energy-related MLPs. The panel was supposed to be full of…wait for it…

It’s rare for contrarians and momentum/chartist to be able to claim the same sector and same stocks. But even as Apple, Google, Facebook and Amazon hit all-time highs here in front of us, making them favorites of the momentum/chartist types, I think there’s a real case to be made that they are still so under-loved by both retail investors and professional money managers that they actually are still rather good contrarian plays. It all reminds me of the argument that Brian Gallo so often makes — that being wildly bullish even as the markets hit all-time highs has been and might still be the most contrarian stance of all.

In full disclosure, I sold 10% of my FB and Google common stocks on Friday. They are still be two of my three biggest positions as they have been since they were a fraction of today’s prices, but I did take this opportunity to trim them down a bit.