As per our playbook, I’ve been patient in waiting for good pitches before taking swings. This week, in the midst of this current stock market weakness, I’ve started nibbling on some of my favorite long-term Revolution Investing stocks and now I’m going to step in and add a new name to the portfolio.

Let’s look at one of the leading wearables companies on the planet, FitBit.

I am starting a small position in some FitBit common stock today because I see big potential upside if this company delivers on its potential to become an entire eco-system of wearable technology and big data.

Fitbit, as we know it right now, is the world’s leading fitness wearable company, making wrist bands and clippable devices that monitor a users fitness activity by tracking the calories burned or distance covered and other information. The main reason I’ve been so cautious on Fitbit is because the Apple Watch and other smartwatches which are Android-based do much of what FitBit does. But Fitbit itself is actually becoming a platform. Likewise, the company’s now got a huge lead in the entire wearables market and over time, Fitbit can leverage its leading wearables platform to create new products and add features to their own products. It’s a classic “Flip It” (say “FitBit Flip It” three times fast if you can) where you take conventional wisdom and turn it on its head. The introduction of fitness tracking in smartwatches is actually propelling more people to check out Fitbits wearables instead of just taking share from Fitbit watches. Instead than seeing just a competition between smartwatches and fitness wearables, you’re likely to see both develop and integrate together in an exploding marketplace.

You know there’s no bigger bull on the Wearables Revolution for the next five to ten years than I am. We were right when we predicted that the the world marketplace for smartphones would explode from 100 million to more than 1 billion units per year over the last five years. And if there’s 1.5 billion units of smartphones sold this year, I think we can expect to see up to 5 or 10 billion units of various wearable devices sold in a single year’s time by say 2019 or 2020. Fitness wearables could alone count for several hundred million units sold per year and Fitbit could itself keep 50% market share in the fitness wearables market alone. If Fitbit sold 100 million wearables in 2020 at an average cost of $150 each, we’d be talking about $15 billion in revenue. That’s called “Top Down” analysis by the way.

That number sounded so outrageously big to me that I decided to make an earnings and revenue model for Fitbit to check my numbers. I took 2014’s actual revenues and earnings and then build out the model using three different assumptions for a worst case, middle case and best case scenarios. This is called a “Bottom up” analysis by the way.

You can see the model below and you can click on it to go see the actual spreadsheet I used to make it: 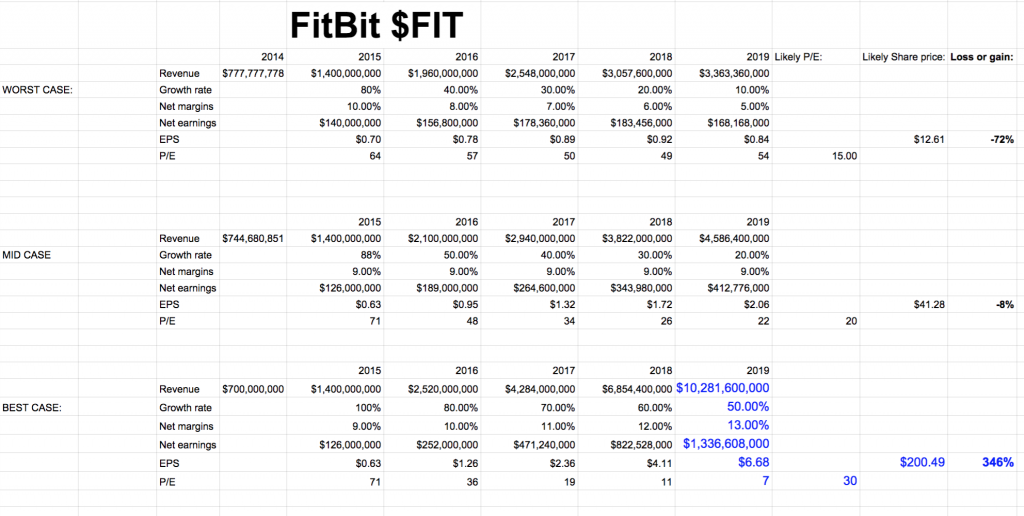 You can see there that I can get to a $10 billion revenue run rate for the company using some very strong growth numbers for this year and next. If the company reports worse numbers than the consensus of sellside analysts expect it to grow quickly over the next five years, there’s serious risk of downside. If the company numbers that are just about what the analysts expect, the stock would likely be about at these same levels in five years. And if the stock can maintain its current growth trajectory with a steady slow down in annual growth per year over the next five years, we’re looking at a 300-400% gain in our shares. I think the analyst estimates are indeed too low. The company will report its first earnings as a publicly-traded company on August 5th and I want to get my toe in the water before that report.

I’m adding a 1/3 position in Fitbit today and will add another smaller tranche in the next few days before the report, but will leave myself some room to add more if the report is strong but the stock were to sell-off afterward.