I’ve got a new name I want to start scaling into. I’ve been working on this name since I met up with one of my old idols, George Gilder, back a few weeks ago when I MC’d the San Francisco Tech/Biotech Money Show. The company is one of the single purest plays on the Internet-of-Things movement and they are also becoming a big Cloud Networking play too. The company’s name? EZ Chip, stock symbol EZCH.

First things first, the caveats. EZ Chip is based in Israel and you guys know, as I’ve explained many times over the years, that I don’t like investing in non-US securities very often though we currently own Sony, based out Japan. The biggest problem with investing in overseas companies is that it’s hard enough to have faith in our own country’s laws the enforcement of them. The US, for all its problems, remains the cleanest and healthiest economy in the world, and it’s still very hard to invest in companies here and make big money.

Caveat number 2 is that the stock has been crushed over the last couple years because the company recently lost their biggest customer, Cisco, which had accounted for nearly 1/3 of their sales. Cisco hasn’t ever really explained why they let EZ Chip’s contract go, and the stock is down from nearly $50 per share to just over $20 per share. I like seeing the stock chart itself has turned upward over the last couple months and appears to have finally more than fully discounted the loss of the Cisco business. 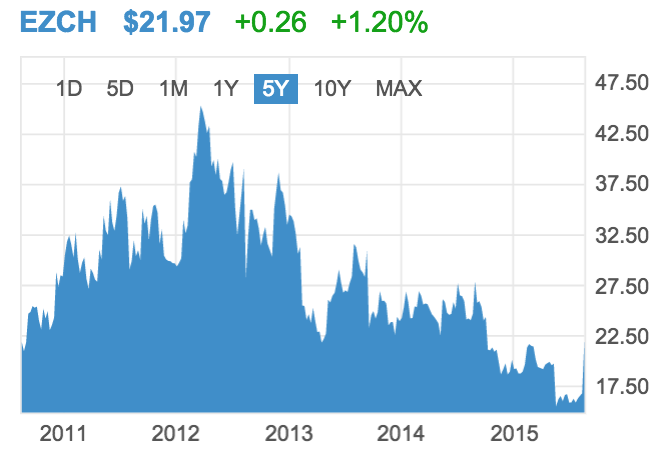 Finally, though this isn’t necessarily a caveat, but this is a rather smaller cap company, with a market cap measured in hundreds of millions, not billions like most of our positions. I am investing in this name today because I do think its market cap will be measured in billions of dollars in coming years, which could give us a 5- or 10- or even bigger bagger over the next decade if things go right for the company and its strategy delivers what they and I think it could and should.

So, with those caveats aside, let’s jump in with our Revolution Investing analysis.

EZ Chip makes highly-programmable rather low-cost networking chips. The kind of chips that every Internet-of-Things, from refrigerators to thermostats to ovens and alarm clocks in your bedroom will need to communicate to the Internet to make them “connected”. There will be billions of IoT appliances and household sold in the next ten years — up from a few million today, and every single one of those devices will need a networking chip inside it.

Meanwhile, I’m sure you’ve read how Facebook and Google are building their own custom servers and networking switches and routers, tailoring them to exactly their needs. EZ Chip is starting to break into that very nascent but eventually multi-billion dollar market too.

EZ Chip is still a very profitable company, having reported $11 million in earnings on $28 million in sales over a 90 day period in its most recent quarterly earnings report. The company is on track to report $1.30 or so in earnings this year on $118 million in sales. Next year, the four analysts who cover this stock currently, expect that the company will grow their topline 15%+ and earn $1.60 per share. I think next year’s estimates are too low and more to the point, I think the company could be earnings $3 per share or more by the end of this decade.

The market cap of the stock is about $600 million right now and they have no debt with more than $100 million in cash in the bank. That’s nearly $4 per share in cash which means that with the stock at $21 per share right now, we’re able to start buying it at an enterprise value (market cap – net cash) just about 10 times next year’s earnings.

If the company can grow its earnings to $3 per share over the next four or five years, I expect the stock will be up 3 or 4 times over its current levels.

I wouldn’t go all crazy and plow into a huge position in this name all at once, rather I plan on slowly building this position up in my personal portfolio slowly but surely over the next two or three quarters, in a slow motion tranche kind of approach. I would expect that if the stock drops back into the teens in the next few weeks, I’d be a little more aggressive about scaling into it, but for now, I’m personally going to start off with about a 1/4 full-sized position with plenty of room to add to it in coming weeks and months.

CORRECTED - Trade Alert: Not zen about ZEN (and a note on Tesla and Slack)
Trade Alert: You scared, worried or relieved? Why I'm buying some put hedges
Trade Alert: Locking in 1000-2000% gains in Bitcoin
CORRECTION: Can't short FEXPX
Trade Alert: Nibbling on fast food puts and other notes