I spend about 1/2 an hour on the road each morning and night as I commute to my office and sometimes in the morning I flip around the SiriusXM stations to listen to CNBC or Fox Business. On Fox Biz this morning I heard Donald Trump on the phone with my old pal Stuart Varney and I noted what The Donald said when it came to managing his money.

Trump said that three years ago he got sick of making less than 1/2% in CDs and checking accounts and decided to buy stocks with the bulk of his money for the first time in his life. For six years now, I’ve been harping on this very concept of forcing savers into ever riskier assets that is the main reason I’ve said we’ve been headed into this Bubble Blowing Bull Market.

Trump then elaborated that he sold most of his stocks earlier this year. And now? Now he said he’s got to figure out where to put his money once again, since interest rates remain so low.

There’s more money in CDs and savings accounts in the US than ever in history. Despite the wildly-low yields that people and companies get from CDs, savings and checking accounts, people like Trump have been on the sidelines for the last few years and/or have money currently stockpiled. 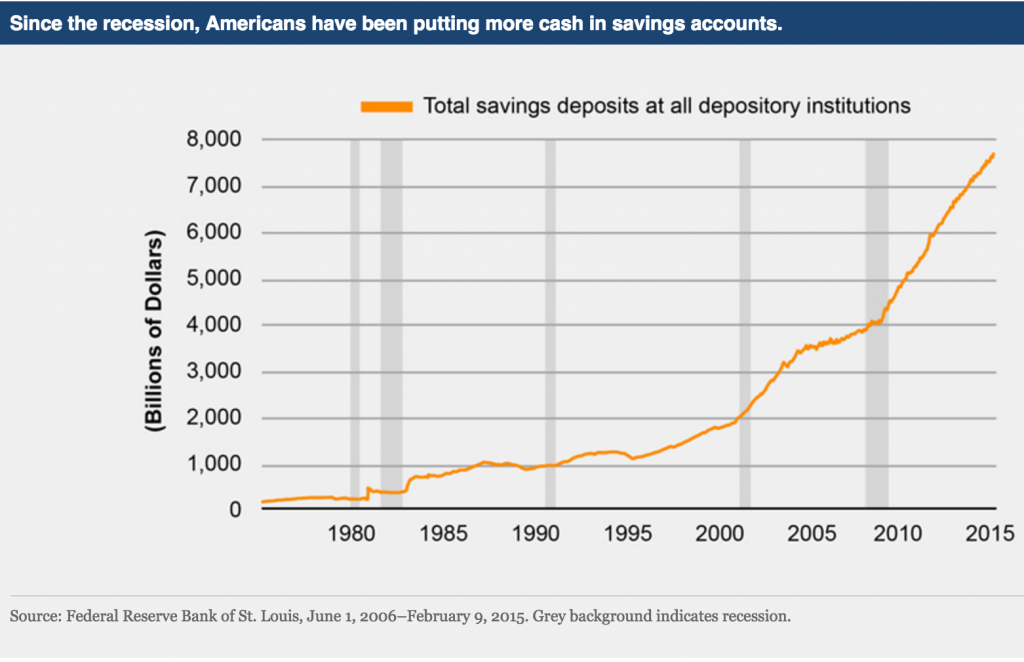 That chart goes a long way towards explaining why I got so bullish again late this summer as stock markets crashed over concerns about China, Europe, ISIS and the Federal Reserve potentially raising rates. So many money managers and average Joes at home are all sick of trying to avoid risks and getting no returns on their money. The vast majority of investors, retail and institutional, are still so worried about another potential market crash, financial crisis, or other Black Swan that they’ve been avoiding stocks since 2008/2009 or they were selling their stocks in a panic this summer at the lows.

You can dividend yields that are 300-600 basis points (3% to 6%) above the 0.35% you get at the bank right now. GPS device-turned Wearables company Garmin $GRMN for example yields more than 6%. Our old short IBM, which is yet another short I covered way too early, is at 52-week lows today, bringing its yield up to nearly 4%. Apple, which remains the most valuable company on the planet and is within 10% of its all time highs yields 2%.

So, the upshot is that the markets are likely headed much higher in coming months and over the next year or two as the underlying 0% interest rate environment continues to drive the Bubble Blowing Bull Market higher. I remain more aggressively long stocks right now than I was earlier this year when the markets were at all-time highs, but less aggressive than I was back in 2011 and 2012 when stocks and valuations were much lower.

A few other notes:

Our new short position in $VRX Valeant Pharmaceuticals is working out very well for us as the stock is down another 9% on top of yesterday’s 10% crash. I’m ready to short more but haven’t had a chance yet as the stock is getting walloped on exactly the analysis behind our short idea in the first place — that pricing is about to get scrutinized and that Valeant’s financial models are in trouble. It’s now down $30 or nearly 20% from its highs on Friday. 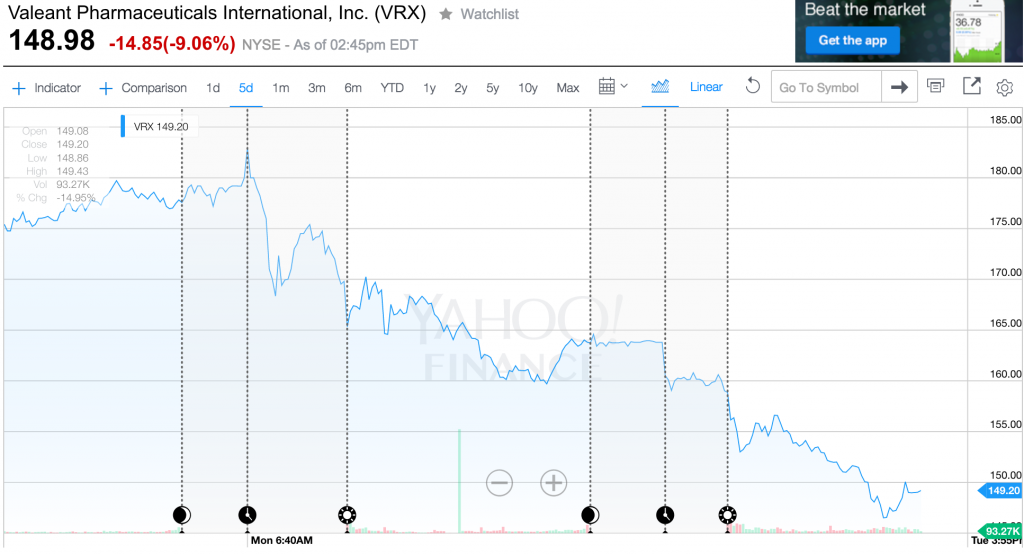 I’d still avoid $TSLA and might eventually even short this welfare-dependent company now that it looks like the fawning praise and halo for the stock have finally faded. Major mud on the face for Consumer Reports. And bad for $TSLAtoo.

“Consumer Reports withdrew its recommendation for the Tesla Model S – a car the magazine has previously raved about – because of poor reliability for the sporty electric sedan. Consumer Reports surveyed 1,400 Model S owners who chronicled an array of detailed and complicated maladies with the drivetrain, power equipment, charging equipment and giant iPad-like center console. They also complained about body and sunroof squeaks, rattles and leaks.”

The turnabout comes after the influential consumer magazine handed the luxury car a “worse-than-average” rating in its annual report on the predicted reliability of new vehicles issued Tuesday.

Speaking of our old short IBM, here’s a large part of why IBM can’t stabilize: “in the Enterprise application space we are seeing a shift away from traditional large ERP implementation projects to smaller initiatives that are built around cloud, mobility, security and analytics. We’re continuing to grow in these high value services but we’re still being impacted by larger contracts that are reaching their maturity. Our decline in consulting and system integration reflects this shift in market demand”
Legacy tech like IBM has built is killing their ability to innovate.

Too many chartists, momo-lovers and at-home traders are just sure that $100 will be a huge breakout for Facebook. Feet to fire, couldn’t you just see $FB finally break thru $100, spike to $102 or $103 and then reverse back to $95 or even $90 just to shake all those weakhanded holders out?

FitBit spiking again today as Morgan Stanley’s Katy L. Huberty notes that Fitbit continues to be the market leader and has been ramping its enterprise sales force to “capture the enterprise opportunity.” Analyst Katy Huberty mentioned, “We have increasing confidence in our bull case for FIT and the wearable market, as more employers are incorporating and subsidizing fitness trackers as part of their health programs.” Although 30 of the Fortune 500 companies are Fitbit’s customers, Huberty believes that the enterprise opportunity is still in a nascent stage, with Morgan Stanley’s CIO survey pointing toward robust growth in enterprise subsidy programs in 2016. According to the Morgan Stanley report, “Gartner considers fitness tracker programs a strategic priority for enterprises. It is advising employers to gain employee permission to share fitness data with wellness providers in order to lower healthcare costs.”

Matzo balls (Not the bulls) and Happy trailer folks (happy traders, those) and permable (perma-bull), from a Scuttle from @RobertMarcin: “So who’s happy these days?? Matzo balls who got their teeth kicked in a few months ago. Not the Bears who are getting their teeth kicked in this month. Only happy trailers folks who sold in the spring and bought back in the fall especially the risk on trade. Are you stuck as a permable or a perma bear?”