If you’re still looking for a special gift for someone in your life this holiday season, why not help them become a better investor and trader by giving them a subscription to Trading With Cody? Email Cathy at support@tradingwithcody.com and she’ll set it up with you and work with you on when/how you let the person know about their Trading With Cody gift.

The two year charts for the US vs global stock markets vs gold vs oil are rather shocking in their disparity.

Near-term though, Facebook, Apple, Google, Amazon, Netflix and most every other stock on the planet has been hit along with the broader stock markets in the last week or two. It’s why we took profits when we could and now at some point we can choose to nibble back on some of those shares that we recently trimmed down on. No rush for right now as the markets sell-off and more importantly, as I discuss below, there’s rising risk from escalating turmoil in the corporate debt bubbles.

I’m still working on analyzing where we are in the Great Corporate Debt Bubble and if it’s about to pop. Ironically, I don’t think it’s the Fed raising rates or not that will eventually pop the Great Corporate Debt Bubble, it’s going to happen more naturally as overleveraged companies run into problems funding their debt and their dividends as we’ve seen many commodity companies like $FCX $KMI $CKH and others collapse and likely to have to reorganize if commodities don’t rebound strongly soon. Higher rates from the Fed would likely exacerbate the problem, but I don’t think the Fed’s going to raise rates in the midst of this commodity melt-down.

But I do think there’s increasing risk that we could have some sort of a Black Swan type event catalyzed by turmoil in the Great Corporate Debt Bubble. For example, would you believe that energy-related corporate debt makes up 15% of the market according to the Bank of International Settlements?

“The greater willingness of investors to lend against oil reserves and revenue has enabled oil firms to borrow large amounts in a period when debt levels have increased more broadly due to easy monetary policy. Since 2008, companies in the oil sector have borrowed both from banks and in bond markets. Issuance of debt securities by oil and other energy companies has far outpaced the substantial overall issuance by other sectors (Graph 2, left-hand panel). Oil and gas companies’ bonds outstanding increased from $455 billion in 2006 to $1.4 trillion in 2014, a growth rate of 15% per annum. Energy companies have also borrowed heavily from banks. Syndicated loans to the oil and gas sector in 2014 amounted to an estimated $1.6 trillion, an annual increase of 13% from $600 billion in 2006.” 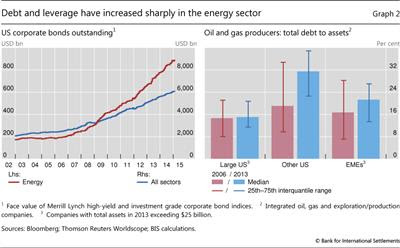 Overall, the stock of debt of energy firms has risen even faster than that of other sectors. Debt issued by oil and other energy firms accounts for about 15% of both investment grade and high-yield major US debt indices, up from less than 10% just five years earlier.“

So we’re talking about trillions of dollars in debt in the US energy sector alone. And there’s probably another trillion or so in debt that other commodity-related corporations owe to lenders, bondholders and other investors. There’s also a few trillion of inter-corporate obligations and promises to each other inside the energy and commodity complex and a collapse in capital expenditures in the industry. And all that is in question and getting increasingly risky as a catalyst for some panicky market action in the next few quarters ahead.

I’ll be doing more work on this subject all weekend and into year-end as I’m trying to get ahead of its possible ramifications and figure out the best way to profit from this coming implosion of trillions of dollars of commodity and energy-related corporate debt. This whole analysis underscores my approach to avoiding highly-leveraged balance sheets and finding stocks that have lots of financial flexibility and net cash on the balance sheet.

My lone energy stock, First Solar, has billions in net cash on its balance sheet. The stock sold off  yesterday after issuing guidance for 2016 but has bounced back this morning some. I’ve owned this stock for two and a half years now as we’ve had some nice luck trading it using my tranche buying style where I scale in and build up the size of my long-term positions on weakness and trim to take some of those profits off that table when they spike. I’d done both recently with First Solar, as I’d added another tranche of FSLR around $40/share when the DJIA was down 1000 and hit its August lows and thenI’d trimmed those same shares near $60 a share back in October as I’d noted for Trading With Cody subscribers.

The midpoint of the new FSLR revenue estimate is slightly below estimates but the EPS looks like a guide higher. Cash flow guidance at $500-700MM looks okay and I sure like seeing them say this as I’ve been on an anti-net-debt tirade lately: “The ending net cash balance is projected to increase by the end of 2016 to $2.0 to $2.3 billion. Capital expenditures of $300 to $400 million are higher than 2015 forecasted levels as the Company invests in further advancements in its cost and technology roadmap.”

On the upside, every consumer benefits from cheaper energy prices. You can thank the oil crash for this: “United Airlines is bringing free snacks back to coach”

Have a great weekend everybody. And if you’re still looking for a special gift for someone in your life this holiday season, why not help them become a better investor and trader by giving them a subscription to Trading With Cody? Email Cathy at support@tradingwithcody.com and she’ll set it up with you and work with you on when/how you let the person know about their Trading With Cody gift.