We’ve been slowly but surely cutting the number of long positions in our portfolio and raising cash by trimming some of our biggest winners too. Let’s stick with our long select Revolutionary growth tech stocks, stay away from energy, avoid gold miners, run from overleveraged balance sheets, and keep the Great Corporate Debt Bubble on your radar. Let’s be selective in our longs and not overly bullish and certainly not complacent as debt turmoil, stock market weakness and risks to the system rise. Interestingly, that’s exactly how the Trading With Cody playbook we follow has had us positioned for the last five years anyway. Speaking of the Great Corporate Debt Bubble and risk…

Junk Fund’s Demise Fuels Concern Over Bond Rout – Wall Street Journal Dec 10, 2015 – The firm took the unprecedented step because it needed to act …Third Avenue said it isn’t seeing unusual withdrawals in its other funds, which …

Remind anybody of this news from back right before the stock market crashed in 2008?

Money-Market Fund ‘Breaks the Buck’ – The New York Times – The New York Times Sep 17, 2008 – This is only the second time in history that a money market fund has “broken the buck” … It noted, too, that in the only previous case of a fund breaking the buck, investors … The fund’s financial records also show that more than half of its … the assets of money funds have grown sharply since the credit crisis  …

Now I’m not saying that the stock market is about to crash 50% like it did in the next few months after that Money Market Fund broke the buck back in September 2008: 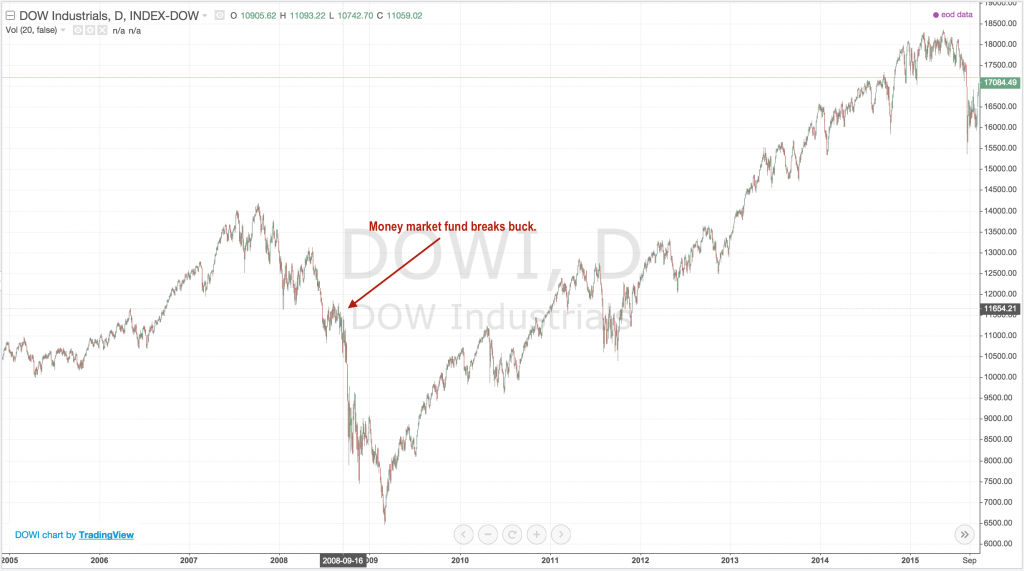 But let’s just say that it’s a potential Butterfly Black Swan, if I may mix metaphors.

Black Swan: An event or occurrence that deviates beyond what is normally expected of a situation and that would be extremely difficult to predict. This term was popularized by Nassim Nicholas Taleb, a finance professor and former Wall Street trader.

Butterfly Effect:  In chaos theory, the butterfly effect is the sensitive dependence on initial conditions in which a small change in one state of a deterministic nonlinear system can result in large differences in a later state.

I’ve always told you guys that even as we’ve rightly been bullish and long since the 2009 bottoms that I fully expect I’ll turn bearish at some point too. I’m not outright bearish or looking to get net short yet, but I do think there’s going to be some serious downside in many high-falutin’ names. So, I’m not in a rush for the exits and I’m not yet freaking out like I did back in September 2008 on my TV show six days before that Money Market Fund broke the buck and indeed right before the market did that 50% crash I mentioned earlier.

That said, there’s just no place for hype in this market and BS is what we want to short. “BS?” Yes, BS. Remember when I explained a few weeks ago that:

“This market has entered a ‘No BS’ phase. If there’s a whiff of BS in a company’s business model, it’s likely to get crushed and crushed again. Companies like Valeant or $MNK which have been at best aggressive in their accounting get demolished as traders and shortsellers and long investors alike sell first and ask questions later. I’ve talked recently about how the market is a winners-take-all and that the losers just keep losing, calling this a ‘Tale of Two Markets’ dynamic. Most of winners are at or near 52-week highs and most of the losers are at 52-week lows. Notice I said ‘most’ because we can still find some exceptions to the rule that are likely to fall in line with the ‘Tale of Two Markets’ dynamic as this ‘No BS’ phase continues.”

Well that’s exactly what we’ve got in spades these days. I am going to add a new short position to my portfolio. A couple notes of caution first –

First, I’m always nervous when I short a stock as it can open you up to huge losses if it goes against you.

Second, this is a small cap stock, with a $500 million market cap, and it’s not terribly liquid and is a popular short amongst some professionals like small hedge funds. That means it could gap up if the company receives positive press or escalating hype and promotion.

I’m shorting KNDI. This is a go kart company that looks like it’s hyped itself up into an unreasonable valuation that we might be able to profit on as it unwinds during this no-BS market.

The company’s balance sheet isn’t terrible, as it reports having more than $100 million in net cash and no debt but it’s cash flow and profitability swing back and forth each quarter and has been pretty ugly for most of 2015. Read about how the SEC has come after KNDI’s management before here.

Here are some other comments from a couple other traders on Scutify who have been following/analyzing/trading KNDI:

LunaticTrader – $KNDI has way too many stocktwits watchers for such a small company. #overloved. Kandi is mainly a go-kart maker with 500 employees. Does anybody believe that a small company with a $500 million market cap will have the R&D budget to develop tomorrow’s electric cars? Just have a look at their products:http://tinyurl.com/psq4kq4

Livingston67Ideas – Warren has made a sizable investment in there direct competitor BOYD, another Chinese electric car maker….The PR in this name has created an almost cult like following on Seeking Alpha…$KNDI PR firm loves too throw around names like UBER and Goldman Sachs.. Yet there is never any specific’s and or dollar amounts associated with any of there press releases…The majority of the float sit’s in retail account’s… Hence this name carries a 70% margin requirement at most every firm and discount house on the street…I question there accounting in many area’s… Chinese is offering subsidy’s for Electric Vehicles… seems like $KNDI is always awaiting payment from the Chinese government. The promoters are very active in this name…. The pitch is simple… The next $TSLA so they say… I know off Retail broker’s pitching this So the name as a account opening stock because people are looking for the next $TSLA..

Okay, Cody back in real-time here. I’m going to short a few shares of the common stock, starting with a 1/3-size full position and I’m also going to slowly bid on some long-dated KNDI puts, which aren’t cheap and carry a large premium. I’m going to put in a bids slightly above the current bids on the puts that expire out in June of 2016 and January 2017 with the $8 and $10 strike prices and will continue to do so each day for the next few days and as long as the stock stays near $10 or higher. This will allow me to hopefully get filled on some of those bids on the puts at prices that are low enough to really kick in if the stock falls 50% or more in the next year, as I think it could.

Trade Alert: Dell (Plus Suggested Readings For Bubbled and Troubled Times)
Trade Alert: Stay tuned, be cool, be opportunistic
Trade Alert and complete technical analysis for Facebook
Trade Alert - Facebook rocks, so you know what to do now
Trade Alert: Tesla reviews underscore how Consumer Reports is biased and hypocritical