Stock markets are up just a bit this morning, but they have been absolutely decimated year to date, which means we’re talking about just the last five trading days. We’ve certainly seen most of our longs and all of our shorts get crushed so far, which is reminds us why we followed our playbook: trimmed the Google, Amazon, Facebook and other positions that were at all-time highs recently and why we sold AMAT, Twitter and other positions and raised more cash in the last few weeks when stocks were priced higher.

Look, one of the reasons we have a playbook is because we know ahead of time that we’re not going to see our portfolios at all-time highs every day. In the hedge fund world, we call what it a “drawdown” when you are down from your all-time highs, and they are a reality for every trader and investor who ever lived.

Most hedge funds and other managers know all about “drawdowns” these days. Most terribly underperformed the markets which were slightly down anyway last year, and most didn’t have enough exposure to winning tech stocks and had way too much exposure to energy last year. Heck, there’s been almost no asset class unaffected by this new year’s crashes. Oil, energy stocks, biotech, Chipotle, Facebook, Amazon, Google, big cap tech, financials, retail, semiconductors, Apple and most every other stock are all down sharply in the new year. 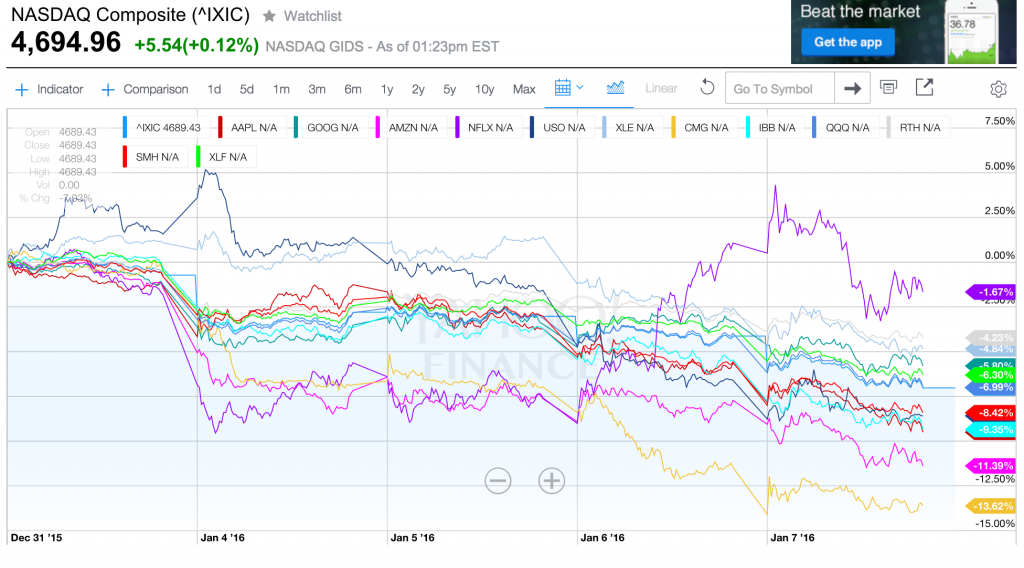 Gold’s had a rally this year, but little good it will do the heavily indebted gold miner sector unless gold can rally sharply back closer to $1300, which is a long way away still. Most every commodity and their related stocks are all down huge in the last few months and this week too.

Other than getting short, which we were indeed doing more of while stocks were still up big in November and December with GWPH, VRX, P and KNDI, there’s been no place to hide.

As stocks have sold off, we’ve slowly been putting some money to work on the long side and added Qualcomm to the portfolio yesterday. That’s just following the playbook again. The fear is building and one more whoosh down, maybe another -400 day on the DJIA and I’ll be a bit more aggressive in the scaling into more long exposure and buying back the shares in names including the aforementioned Google, Amazon, Facebook and Netflix.

And what’s up with Ambarella? The market is assuming that $GPRO‘s still having sales issues and since GoPro is 1/3 of$AMBA‘s sales, the market is crushing AMBA too. I think AMBA’s successfully transitioning away from GoPro and am holding my small remaining position steady for now. As I’d noted in the most recent “Latest Positions” post: “Ambarella (6) – The good news is that nobody asks or seems to care about Ambarella anymore. The bad news is that GoPro’s still their biggest customer.”

I’ll leave you with something I wrote back in 2012 when the markets were in a serious downturn, led by a serious Apple pullback. With Apple leading the markets into a panicky sell-off to the Great Bottom discussion to iPhone sales concerns there’s a lot of similarity to the current set up, no? Check out what price FB was at when we wrote that. I’d just made FB a top 3 largest position a few weeks prior (and it still is one). From November 15 and 16, 2012:

“We need to let the markets, the economy, sentiment and our analysis of all three of those things weigh on our trading decisions. Great Bottoms (caps intended again) come when the markets are down big (check), the economy for corporate America and thusly earnings are growing (check with the caveat that the growth has slowed markedly) and when sentiment from the bulls is terrified (Are we there yet? Answer the poll), the bears are cocky (been a while since the bears were actually cocky, huh?) and the headlines are full of explanations and reasons for the panic to continue forever (the lack thereof being the topic of today’s column).

The upshot is that we don’t want to let our wishing for a bottom to color the fact that not all the elements for a Great Bottom are here quite yet.

Today is much the same. Apple’s slowly bleeding lower, down more than 2% actually. Apple’s down 25% since its the iPhone 5 launch. I’ve owned and told my subs to be long Apple since it was at $1 and I’ve seen it drop 25% or more several times. It’s sickening every damn time. It’s sickening this time. But it happens.

Facebook’s back up a bunch again today, near $23.50 and those calls we bought back when it dipped below $19 a few days ago are really profitable. I’ve got a pretty big position in FB and those calls make me get longer as it goes higher. I’m not selling any of it yet.

No matter what you do, don’t let your emotions dictate your trades.

I admit I am more scared as a bull right now than I have been in awhile and Apple’s endless bleed of death of got me worried too. I will not let those emotions affect my analysis and/or my trading though.

I sent in some money recently and I’m still not as long as I was back near the top when we started trimming/hedging a few weeks ago, and I’ll be sticking with the playbook.

PS. Feeling scared these days? Here are some great quotes about fear and each applies to our current situation in several ways if you think about it:

Expose yourself to your deepest fear; after that, fear has no power, and the fear of freedom shrinks and vanishes. You are free. – Jim Morrison

Courage is resistance to fear, mastery of fear, not absence of fear. – Mark Twain

If you know the enemy and know yourself you need not fear the results of a hundred battles. – Sun Tzu

The fear of death is the most unjustified of all fears, for there’s no risk of accident for someone who’s dead. – Albert Einstein”