Let’s do this week’s Live Q&A Chat an hour early at 1pm ET today. You can find it at http://twc.scutify.com/members or on the Trading With Cody App. You can also just hit reply to this email and I’ll include your question and my answer in the transcript we send out later.

You can read it on a browser or download a PDF of to read on a Book Reader app by clicking here: Stocks Wanted for 2016. You can also just hit reply to this email and ask us to email you a copy of the PDF directly.

Morning folks. Another slippery rally to start the day, now fading. Not a time for heroes yet. I’ve been saying all year so far that we remain “Still heavy on cash, still being patient as we look to scale into some more long exposure.”

On the other hand, I’m disappointed in having ever bought Fitbit, which has been one of the worst trades/investments I’ve made in a long time. You know what’s interesting though? Fitbit and oil have had about the same kind of performance since Fitbit’s IPO, for the last three months and even over the last five days.

Check out the charts: 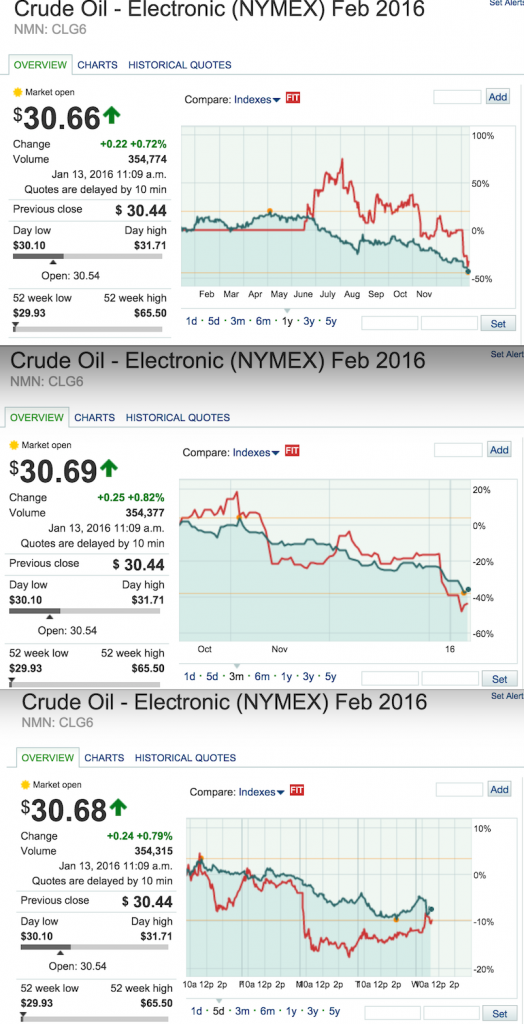 There’s even a little bit of correlation in the action in oil vs Fitbit in each of those above charts. Crazy times. I’d still rather own Fitbit than most any overleveraged oil, energy, or commodity company. Seeing oil vs our worst position puts some interesting perspective on how well we’ve managed to pick our stocks.

I know a lot of you want to know how Amaris and my family are doing. Amaris is continuing to grow, and I’ve put her weight since we got her out of the hospital on a chart: 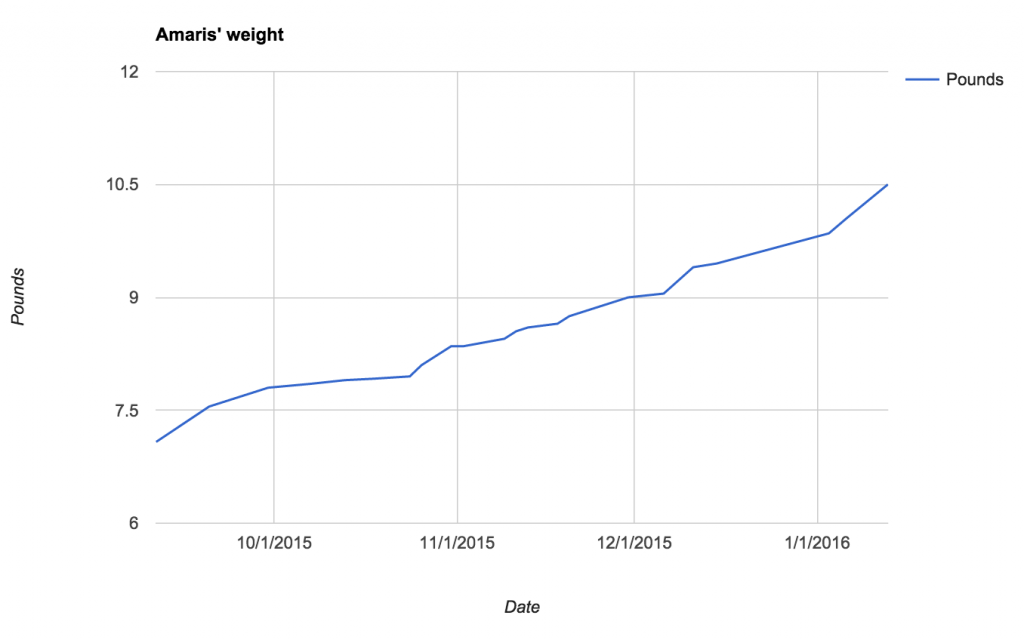 Amaris is getting ever more responsive and likes to play a hide-and-seek game where she looks away from you and then rolls her head back to look at your face — at which point we kiss and coo at her and she smiles so big her whole face crinkles up and sometimes even silently chuckles about it. Her mother and her mother’s parents and myself are pretty confident about our tracheotomy tube and gastrointestinal tube maintenance, feeding her and taking care of her. She’s still quite fragile, but she gets completely away from all her machines and gets to sit and play with us in the living room and for a few hours each day. She also does physical therapy, occupational therapy and other kinds of therapy with experts who have also been amazed at her progress over the last few months. We’ve had so many people wanting to follow along with Amaris’ miraculous healing and growth that my wife created an Amaris Facebook page.

Her older sister, Lyncoln, is hilarious and fun. Sometimes can’t really be sure what she’s saying as she speaks a combination of English, Spanish and Minion. She turns two this week and while we got her several gifts including her own mini-recliner with a cup holder built into the arm, her favorite gift will be the 100+ little rubber bouncy balls that I got from a wholesale dealer on Amazon (started looking at eBay and found them on there, but they were cheaper and available on Prime via Amazon, underscoring why we’ve owned Amazon and not eBay all these years, but I digress). She’s been obsessed with these little rubber bouncy balls since we got her a couple leaving a restaurant a couple months ago.

See you in the Chat Room at 1pm ET today when you can ask me anything on your mind.

Update on Fitbit and TWO AskMeAnything's
Buy panics, trim rallies, keep smiling
Recession Chances, V Or U Rebound, Is This A Bear Market, And More
The impact of fiscal-cliff tyranny
Notes and analysis from NYC