Well, it’s just a blood bath out there again today, as has been the theme since the calendar turned.

We’re not even halfway through the trading day either, and it’s quite possible that we’ll see some acceleration to this sell-off into the close as nobody wants to be long over this upcoming 3-day weekend as the markets are closed Monday for Martin Luther King, Jr day. Feet to fire, I’d guess the market fades lower today, maybe even giving us the -800 day on the DJIA kind of capitulation that I’ve been saying we might need to put in a buyable short-term bottom. And if that happens, we’d likely be set up for a strong, broad rally on Tuesday.

So let’s leave our powder dry for now.

Look at what stock markets and gold and energy have done over the last three months, with the downside really starting just six short weeks ago: 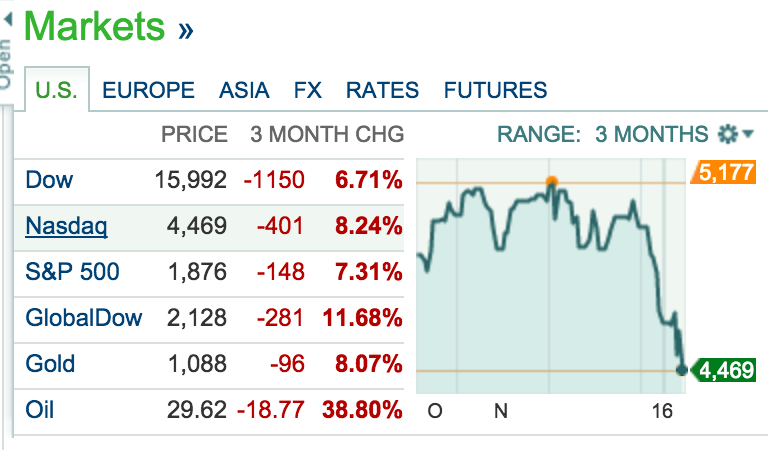 China’s stock market is down more than 20% over the last six weeks.

While I’ve gotten increasingly defensive by raising cash, reducing the size of our long positions, halving the total number of long positions and adding new shorts and put hedges in the last few months and throughout 2014 and 2015, I didn’t get bearish enough or do enough selling and shorting. I feel the pressure of wanting to do my best for myself and all of you subscribers as I write this post with the $DJIA -400 again this morning.

Remember that no trader or investor is going to be at all-time highs every day or every month, though I do strive for that. We have our playbook for times like these when our emotions are trying to creep up. We can use these sell-offs to cover some shorts, sell some puts and scale into some of our longs opportunistically. We aren’t going to catch the exact bottom on most of our buys and we won’t catch the exact top with most of our sells, though obviously I’m striving for that too.

For example, I was asked in the Trading With Cody Chat Room this morning: “Cody, any concern with qcom with intel report and subsequent 9% sell-off in the stock today? If Qualcomm guides down in this market, which been a killer, it could get ugly.”

Yes, I’ve always got concern about any of my longs, but in particular with Qualcomm, we’ve seen some of the other smartphone chip providers warn on revenues lately and it’s possible Qualcomm could too. I don’t think Intel’s own business, dominated by chips for PCs, servers and not for smartphones, is any kind of harbinger for Qualcomm though.

So that goes back to our playbook approach. I’ve already bought two 1/3 tranches of QCOM and for now I’m going to let it ride and hope to get a chance to add another tranche at lower levels. I plan to own Qualcomm for the next 5-10 years as it expands its footprint with a new joint venture to integrate radio frequency controls into the main chipset it sells. Moreover, I think Qualcomm is positioning itself to dominate the smartcar dashboard of the future and that could fuel a whole new Revolution Investing phase for this company.

I don’t know where it will bottom near-term but that’s why we leave room and use tranches to scale into it. If Qualcomm delivers on these Revolutions, it will be generating much more cash and earnings in five years than it is today and the stock would reward that, regardless of whether the S&P 500 itself is up or down this week or over the next five years.

The markets are nowhere near being cheap right now and I can’t find a whole bunch of new names to get thrilled about just yet. So I wait for better pitches where valuations are more compelling than they were in 78 stocks I just analyzed where I noted:

“Despite all the carnage in the last few months in a lot of individual stocks, there isn’t but a handful of stocks rated 7/10 or higher in the book. In my own personal portfolio, I own about a dozen names and have a handful of short positions. My long names are almost all rated 7/10 or higher. That lack of strong buy names is reflective of the fact that the markets just aren’t cheap right now as well as that earnings and topline growth just aren’t strong for many sectors.”

Again, let’s leave some powder dry for now. As I’d noted in the Weekly Live Q&A Chat this week: “I’d probably buy some of the AMZN shares I sold near $700 back if it got closer to $550. I’ve been saying I’d look to buy the $NFLX shares we sold near $130 back if the stock gets below $100. I’d buy some of the $GOOG I’d recently trimmed at higher levels back if the stock gets closer to $600.”

The Fed, the Election, the markets and you
Cody Kiss & Tell: FANG stocks, when to sell, and more stock answers
Your thoughts, please: Windows, Android and Apples
Revolution Investing Reading for the Weekend
Chart of the day, Go nowhere markets and GOOG vs FB