You can find a list of stocks that I’m watching for the long and short side here. I’ve been adding a few names to my Watch List for Longs and Shorts and am writing up some Revolution Analysis on each and might pull the trigger on at least a couple of them in coming days as I get comfortable with them. Stocks I’m watching from the long side right now include:

The Fed cycle and the stock markets

This chart of the Vicious Fed Cycle is a decent graphical representation of my recent Fed analysis.

I tend to think we’re going to see another easing phase and not just a “Fed doesn’t raise rates” phase in coming months.

Q. I am interested in hearing your take on some of the laggards or “dogs” from 2015.  While I exited companies like FIT, AMBA, GPRO, and TWTR after sucking up some losses, I still find their stories interesting and fundamentals in pretty good shape.  Am I deluding myself, or should I drop these names entirely?

I think we should try to look at each of those stories individually and see if there’s any potential upside.

Fitbit is seeing some surprisingly strong sales of its new smart watch and some of its other smaller fitness bands are also selling very well. Corporations are adopting the Fitbit platform as a de facto standard way of embracing fitness and trying to lower health care costs, as evidenced by Target last year. But we need to see a few more announcements like that to really believe that thesis is going to help drive long-term business for Fitbit. On the other hand, fitness bands are being sold by Microsoft, Apple, and about a thousand smaller companies including the ones you see being pawned on TV by Brett Favre for 1/4 of the price of the cheapest Fitbit. I’m holding my small and loser $FIT common stock steady for now.

Ambarella is diversifying away from GoPro as its primary customer and that’s a good thing. Taser and other leading wearable companies are using Ambarella chips. And Ambarella does still supply GoPro and if GoPro were to ever actually stage a major comeback, AMBA would be a low-beta way to be exposed to that GoPro recovery. I’m holding my $AMBA common stock steady for now.

I don’t like GoPro’s management or how they’ve executed since they came public, but there is a big potential for GoPro to create a very cheap 360 degree Virtual Reality platform that would save the company. I don’t think the soon to be released GoPro drone is going to be a game saver for the company. I don’t own GoPro any more.

Twitter’s a company in disarray and is increasingly at risk of being the “next Yahoo”. Newish CEO Jack Dorsey has got to figure out how to create new value and growth from the existing 300 million users of Twitter and make sure it grows its advantages as a real-time news and celebrity outlet. I don’t own Twitter any more.

Everything You Need to Know About the Virtual Reality Revolution

Here’s a full report and a podcast in which I go thru a complete run down of the Virtual Reality sector, including the best and brightest and a few dark horse stocks to invest in.http://www.scutify.com/scuttle…

Virtual Reality (VR) is either one of the next great growth industries or it’s already in a bubble. I think there will be a VR Bubble and it will peak in a couple years from now. In fact, I’ve come to believe that the Virtual Reality Revolution is going to be every bit as big as the App Revolution that I so adamantly predicted and invested in back in 2010.

You need to be careful about picking the technological revolutions you invest in. 3-D printing investors have learned the hard way that if you invest too early in the revolution, however real it ultimately might turn out to be, that you can still lose your shirt if the tectonic plates aren’t actually moving yet. In contrast, you can already see the technological tectonic plates shifting for a Virtual Reality Revolution that will change the way we watch movies, surf the Internet, do surgery and socialize on Facebook.

According to a recent Wall Street Journal article, venture capital funding for virtual reality and augmented reality began to rise significantly after Facebook (FB)announced it was going to purchase Oculus VR Inc. for $2 billion in March 2014, which can be seen in the picture below: 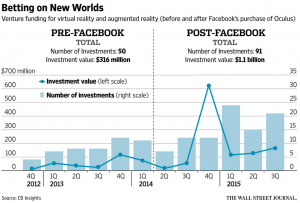 Over the next few years, virtual reality will carve out its own niche in the consumer electronics space if it can just prove to both consumers and investors that it is not a fad that will disappear and never be adopted by the mass market. I choose to put my faith in Facebook, Alphabet (GOOG, GOOGL), Sony (SNE), and the other VR pioneers who already large networks of users and will dominate this market in the coming years.

The best VR plays available to the average investor are Facebook, Alphabet, Sony, Nvidia (NVDA), Qualcomm (QCOM), Ambarella (AMBA), and even Apple (AAPL), who is in the early phases of developing a VR strategy. Subscribers to Trading With Cody know that I own all seven of these companies, with Nvidia being added very recently, so we already have a lot of exposure to the VR world. Some dark horse small cap plays on the VR sector include GoPro (GPRO), Himax Technologies(HIMX), and Vuzix Corp. (VUZI), none of which I own. I think that when investing in an emerging technology revolution it is important to go with the two or three companies that you believe will be the biggest players in the space over the long-term.

Best quote from this very good WSJ article about Facebook’s Oculus Rift VR: “Right now there isn’t a single Rift title that I’m dying to play. Nintendo has Mario. The Xbox has Halo. PlayStation has Uncharted. Until Rift gets a legendary franchise of its own, it just isn’t worth the plunge.”

The most important part of the VR wars is getting developers on board. Playstation already has a critical mass of developers and that gives Sony a leg up on FB’s Oculus Rift and the HTC Vive headsets. Now with the much cheaper price point for the Playstation VR Headset, Sony is definitely positioned as a leader very early in the VR Wars.

While Facebook’s Occulus Rift technology will (at first) be the high-end version of virtual reality products, Google’s approach will address the low end. Indeed, you don’t need to spend $599 to gain access to VR technology, you only need to spend $2 on a plastic headset and download a few free “Google Cardboard” VR apps from Google. Both will see a lot of app developers and new innovations drive their respective VR platforms forward in the years ahead.

Maybe Occulus Rift is to VR what Apple’s iPhone is to smartphones, while Google Cardboard is to VR what Android is to smartphones, if you follow me. Sony is the Samsung of VR, I guess. I’ve owned Facebook since just after its initial public offering and Google I’ve owned for much longer than that. I do think Facebook, Google, Sony and some of the other stocks I own for the VR Revolution can still double, triple or rise even more from their current levels in the decade ahead, in part because they already are positioning themselves to be some of the dominant players in Virtual Reality, which will become a multi-hundred-billion-dollar industry in the next decade or two.

Be sure to check out the latest Cody Underground Podcast for more on the Virtual Reality Revolution.

Upcoming speech in Vegas plus FB/INVN updates
Cody is back from Traders Expo and ready for Weekly Q&A at 2pm EST
Strategies For A Coronavirus-Clouded Crystal Ball
Time for the Relative Valuation Game!
Buy when there's panic in the headlines. Sell when there's euphoria.