The broader stock markets remain close to their all-time highs, but there has been utter carnage in many individual stocks out there, many of which are down 50% or 60% or in some cases, as you’ll see below, are down 80-90% even as their fundamental outlook have improved over the last year or so.

Unlike in 2002 or in 2009 as this kind of a crashing in many individual stocks took the broader stock markets down with them, we’re seeing sector-specific crashes that aren’t carrying over to the broader stock markets. But with many individual names down to a fraction of their recent market caps, there’s a lot of potential to find some great growth names at cheap prices.

Back in 2003 and in 2010, I invested in a basket or two of beaten-down growth tech stocks, some of which became huge winners for me in subsequent years. Apple, Ciena, Network Appliances, CRM, and some other very names have shown up in my baskets like this over the years. By creating a basket of names, we spread out the risk a bit and if we can get one or two of the stocks in the basket to boom to 10-fold or 100-fold returns like some of the aforementioned names I’ve used in baskets like this in the past, we’ll more than make up for a couple that probably won’t work out.

So here’s the deal. I’m going to start with three stocks for the basket today, and since all three stocks are trading in the teens as I write this I’m calling this my Teenager Stocks Basket. I’m adding a small position in each of the following three, about 1/10th the size of a “full” position and will likely nibble a little more on each in the coming weeks and months.

I’ll doing some work on a handful more names like these and will send out a Trade Alert as I add any additional names to this basket.

Here are the three we’re starting with today — FEYE, LGF and TWTR.
FireEye is a pureplay on the network security industry. We all know that network security is a huge growth industry, as the cloud and mobile become dominant. FireEye is the leader in the specialized threat analysis and protection (STAP) market with a 37.9% market share in 2014 (more than seven times larger than its nearest competitor), according to the IDC.

With the IDC expecting the STAP market to grow at a CAGR of 27.6% from 2014 to 2019, allowing the market to rise from an estimated total revenue of $930 million in 2014 to over $3 billion in total revenue by 2019, if FireEye can continue to lead this market it should benefit significantly from this growth. In short, Banks, financial transaction companies, credit card companies and giant retailers are all ramping up spending on cybersecurity and FireEye looks set to grow quickly for years to come.

FireEye has about $921 million in total cash and investments, offset by $715 million in long-term debt (equaling $1.24 in net cash per share). The company’s market cap is $2.3 billion and analysts expect another year of 25%+ growth for the topline in 2016 but still a net loss of $1.24 per share, which is an improvement from an even more significant loss last year. The stock is currently trading at a 2016E EV/Sales multiple of approximately 2.6x.

In the movie and TV production industry distribution and risk-management are king. While the success of any individual movie is difficult to predict, Lions Gate is slated to release 17 major movies in FY 2017, up from 13 in FY 2016, and it plans to have these new movies cover the gap that was left by the conclusion of the Hunger Games franchise. Some big movies in its slate for FY 2017 include: Now You See Me 2, Deepwater Horizon, Power Rangers, and John Wick 2. The global box office movie market has grown at a CAGR of 4.1% over the last four years and growth in excess of global GDP growth is expected to continue. 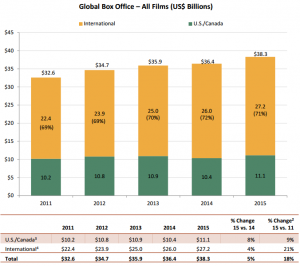 Lions Gate’s Television Production segment is expected to be a key driver of growth for the company going forward, and the segment is currently benefitting from multi-season shows such as “Orange is the New Black,” “Nashville,” and “The Royals.” In addition, its recent majority stake acquisition in Pilgrim Studios should help boost the Television Production segment’s revenue. Lions Gate has publicly discussed the possibility of acquiring Starz and if the deal does end up taking place it could prove to be extremely beneficial for the company. Growth in Lions Gate’s Television Production segment will be extremely important as a greater portion of video content is viewed through video-streaming devices. As one can see in the chart below, currently 62% of “Frequent Moviegoers” have a video-streaming device:

As Amazon, Google, Apple, Microsoft and Netflix vie for ever more content, Lions Gate is a pure play on the idea that “Content is King.” 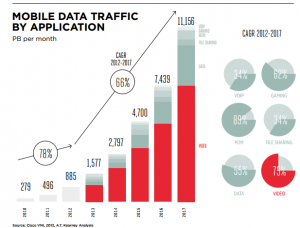 Twitter averaged 310 million monthly active users in Q1 2016 (+2.65% y/y). If Twitter were to earn just $0.10 per day per active user that would equate to over $11 billion in annual sales, which is substantially higher than the roughly $2.4 billion in total sales that it generated over the last twelve months. A chart of Twitter’s total quarterly monthly active users can be seen below. 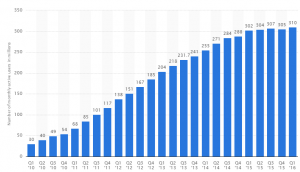 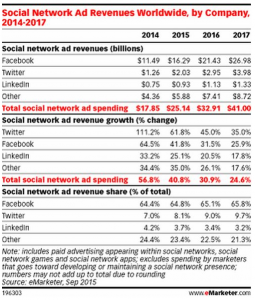