I’m headed to Albuquerque tonight as Amaris will be having surgery tomorrow morning to check up on her trach and a couple other minor procedures. I’ll be at the hospital with her the whole day so we won’t be doing the Live Q&A Chat as scheduled but let’s plan on doing it Thursday at 1pm ET instead.

Amaris continues to thrive, grow and spend a lot of time laughing/smiling so big her eyes close (see pic), kicking and bobbing her head to Buddy Holly, Patsy Cline and the Beatles. Lyncoln, my 2.5 year old is a talking, dancing, hilarious princess. 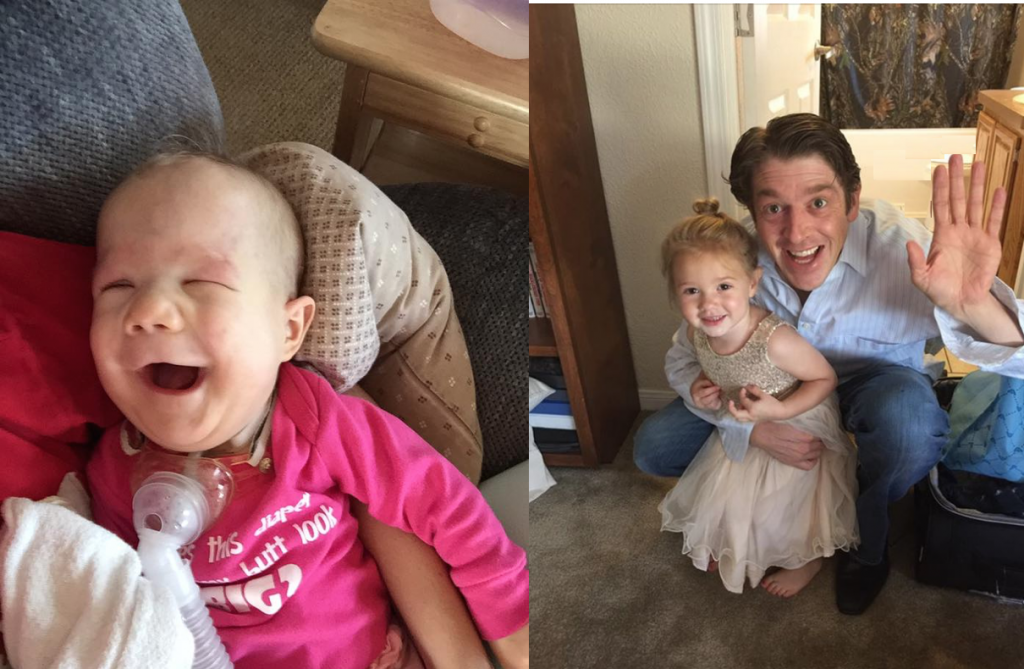 As for the markets, well, what a run they’ve had since the Brexit panic. Today’s the first day since those lows five weeks ago that there’s been much selling pressure out there. And at least so far this morning, this pullback of 1% in the Nasdaq isn’t exactly panicky.

Remember my oft-quoted saying that the hardest trade to make is usually the right one? Is it hard to trim right now? Is it easy to be complacent with our portfolios after the market rallies five weeks in a row from the time we were scaling into more longs? Do you remember how scared you were at the bottom of the Brexit panic? Do you remember how hard it was to buy more stocks at that point?

Moreover, do you remember February when the markets were really in trash sell-off mode and so many of our own stocks were getting crushed? Do you think those same stocks now up 10-50% from those lows are suddenly bullet-proof?

Complacency kills performance. Let’s not be complacent. You don’t have to try to pick the exact top in any of your trims and sells and shorts. But the time to trim and sell and short is when the markets are straight up and complacency is growing and greed is creeping.

As you know, I personally trimmed some stocks yesterday, including some of my largest positions and I also added a small second tranche of QQQ puts to help hedge our longs. Nothing drastic, but I’m not going to sit here complacently surveying the landscape.

The big risk into $FIT‘s earnings report tonight after the close is that they could crash if they have any inventory build up or gross margin issues. On the other hand, I would expect the stock could pop 20% if the report is strong and they guide higher and/or announce another major enterprise customer. I’ll be interested in hearing how business, inventories and new product roll outs are coming along and I will write up a fresh full analysis on Fitbit for next week.

Here are three highlights from the last couple days in the Trading With Cody Chat Room that are worth sharing with all of you.

Q. This is a general TWC question I assume you’ve answered in some form before, but it might be instructive for those of us who aren’t what I’d consider mega investors of your magnitude: when you make a move a la cutting back a bit on $FB because of a recent run and also, as you always rightly mention, because it’s one of your largest holdings (with a different/lower average purchase price than most of us) . . . how do we factor that into our own personal situations? For instance, FB is not my largest ownership, and because of my past trading in the stock (and thank you for your guidance!) I’m plus (only) 35%. I certainly buy into the logic of trimming while one is ahead, and I have done so, but to what degree is your recommendation based on your “gain” numbers and holding size… and ditto for if and when you’ll recommend getting back in? Cody, is that a fair question?

Another subscriber writes: That’s a great question! For me, I will say that it is not an unwieldy part of my portfolio, so I am slower to trim since that position is still relatively in balance for me. I only ever got to purchasing about a 3/4 position of $FB, but it has grown to be about 1.25 of a full position for me, so as long as the position remains in balance for me, I don’t feel any particular need to trade it to stay balanced. This stock in particular I view as a long term hold anyway. I know you didn’t ask me, and this is not intended to be a substitute for Cody’s answer, so I will also await Cody’s thoughts.

And another subscriber notes: I’m sitting on a 4X position on FB and a 2X position on GOOG. I’m looking at it the same way – as long as the fundamentals remain strong I accept that I’m going to be overweight on those. AAPL is a 1X and all the other @CodyWillard positions I’m in various stages of accumulation at <1X. Everyone has to create their own master plan but as long as those are on top of Cody’s holdings list they will be on top of mine. SNE is the only top Cody holding I don’t own any more. It was in that pocket where long dated calls were cheap so I’ve been playing it that way with a lot of success but tend to cash out of calls when they’re up big and the Japanese central planned economy scares me long term

A. Definitely a fair question, and a good one. In addition to the fact that, a position’s size and how much you’re up on any particular stock vs my own personal portfolio matter to your trim/buy/trade decisions, so too does your own personal risk-tolerance, position in life, upward mobility, inheritance potential and so on. There’s no easy answer to your question because all I can really do is help you figure out what’s right for you individually which might or might not be the same for someone even in your exact demographic. I think we do a good job of maximizing our upside potential and minimizing our risks by staying flexible, trimming and using tranches and picking great Revolutionary stocks. Over time that’s what’s most important.

Q. Cody hi, you have not posted any new pictures of Amaris how is she doing? AAPL is looking like a real winner here, would you buy more here?

A. Thanks for asking, she’s doing great and I’ll post a pic today. I’m not looking to add to my $AAPL personally, but I do think it could get to $130 by the end of the year, though it could also be at $95. Longer-term, the replacement cycle for the iPhone is well in tact and will be a recurring revenue stream for many years to come. That said, longer-term, I’m sick of Tim Cook and the lack of innovation at Apple. I’m just in a hold pattern on $AAPL for now, which as you know, I’ve owned since its March 2003 lows.

Q. Hi, Cody. Anything to this story that $FB could owe the IRS up to $5B in taxes?https://www.washingtonpost.com…

A. I hope and pray that $FB and all these corporations playing shell games to avoid paying their fair share of taxes for the roads, courts, armies and so on that they use in his country. I don’t think it matters long-term to the stock, but if they and others like $AAPL, which had a 3-4% income tax bill last year do finally get cracked on for their tax avoidance schemes, the stocks would likely price in a 20-30% hit at some point, I suppose.

Is The Entire US Dollar Global Economic System At Risk Of Collapse?
Bubble? So what says Google
Snapchat, France's elections, today's big rally and you
One energy stock that's gone up big PLUS the Great Corporate Debt Bubble
Six things I learned growing up with Neil Patrick Harris