Here’s much of what I did during my 72 hours in San Francisco last week:

I got to the Marriott Marquis to give three talks at the MoneyShow.

When I walked into the hotel, I caught up with with old friend, David Callaway, who is the new CEO of TheStreet. We chatted about each other’s lives and talked about the #AppRevolution.

I then attended the Money Show VIP dinner with some of the other speakers, sitting next to Mark Mills from the Manhattan Group and across from former Libertarian Presidential Candidate, Wayne Allan Root and Trump economic advisor, Steve Moore, both of whom had been on my old Fox Business TV show a couple of times. I got to catch up for a few minutes with George Gilder’s who’s books and theories on technology have been a big influence on my life. 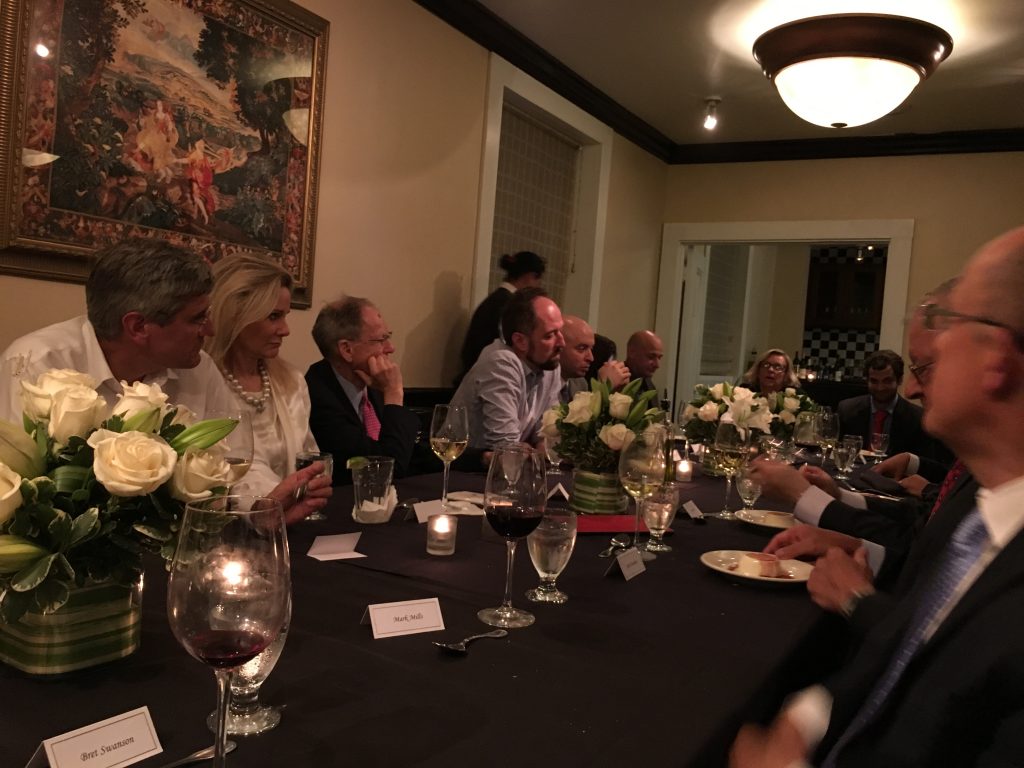 I then met up with two hedge fund friends of mine for a beer and a game of pool (I lost) to talk markets, business ideas and Revolution Investing stock picks. 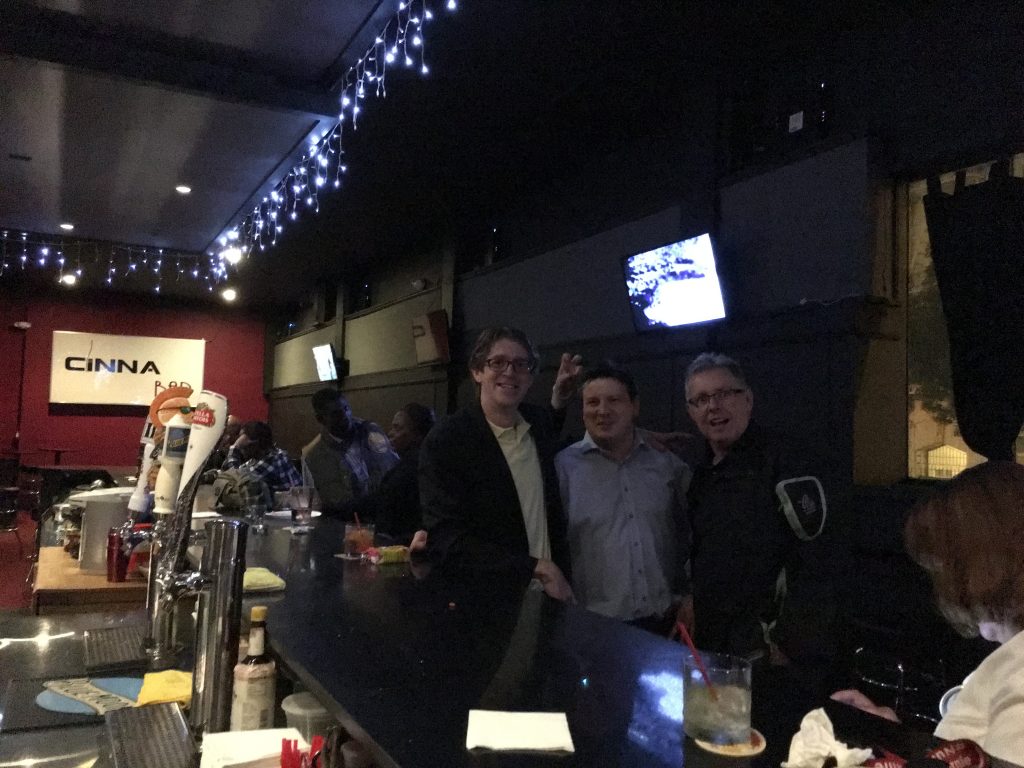 Up early the next morning, I had breakfast with Phil, a Trading With Cody subscriber from Dallas who had brought his son to see me at the show. His son, who is a senior studying Finance and Accounting at the University of Texas in Austin, is going to do some interning for me. Asked for advice on how to get ahead as a Wall Street analyst, I told him that he should pick nascent but huge growth (read: Revolutionary) industries and become one of the “experts” on that industry. He’d spent the summer as a energy analyst inside a big brokerage firm. I told him that since his bosses there had been energy analysts for the last forty years, it’d be a long time before he’d ever have a chance of understanding that industry as well they do. Meanwhile, with industries like drones, artificial intelligence, wearables and so on, there are few experts and almost nobody who has studied/banked in those industries for decades. There will be trillions of dollars flowing into AI, wearables, apps and so on over the next ten years, so get your bucket out in front of that flow and capture some for yourself.

After breakfast, it was time to meet up with Scutify/Headlne White Label colleagues — the former head of prime time programming at Fox (my old boss) who had come down from NYC, a software sales manager with decades of experience (and a long-time Trading With Cody subscriber) who had come down from Michigan, and Kheang Ly, the co-founder/chief developer of our company.  We talked about strategies, tactics, finances and threw around some new ideas for how to grow revenues and traffic. My hedge fund friends joined us for lunch where we further discussed the opportunities and strategies.

We talked about the markets, growth industries and how the App Revolution is more important than ever — doesn’t every celebrity, sports team, media, newsletter writer, coffee shop, sorority, fraternity, TV show, blogger, preacher, small business need their own app? If someone is promoting themselves or their business on social media, they should have their own app.

I got cleaned up and put on a suit and tie to go give my first presentation at the MoneyShow. Though we had to switch to a bigger room to accommodate the crowd, we eventually got everyone settled into a big venue where I gave my talk about The Most Important Trends You Need to Be Investing In (you can see my extended notes for the speech, including some of the stock picks here). 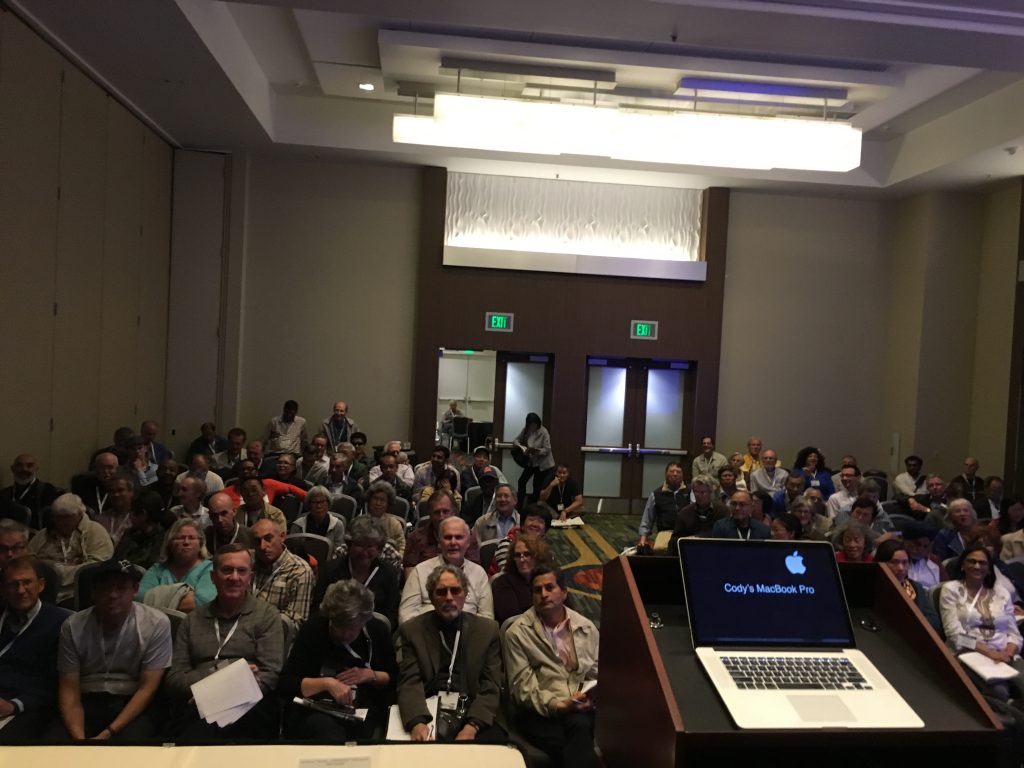 After my talk, Kheang and I headed out for a steak dinner at the beautifully-marbled (and I’m talking about both the 1920s decor and the bone-in ribeyes) Osso. More markets discussion, politics and stock picks were the dominant topics. 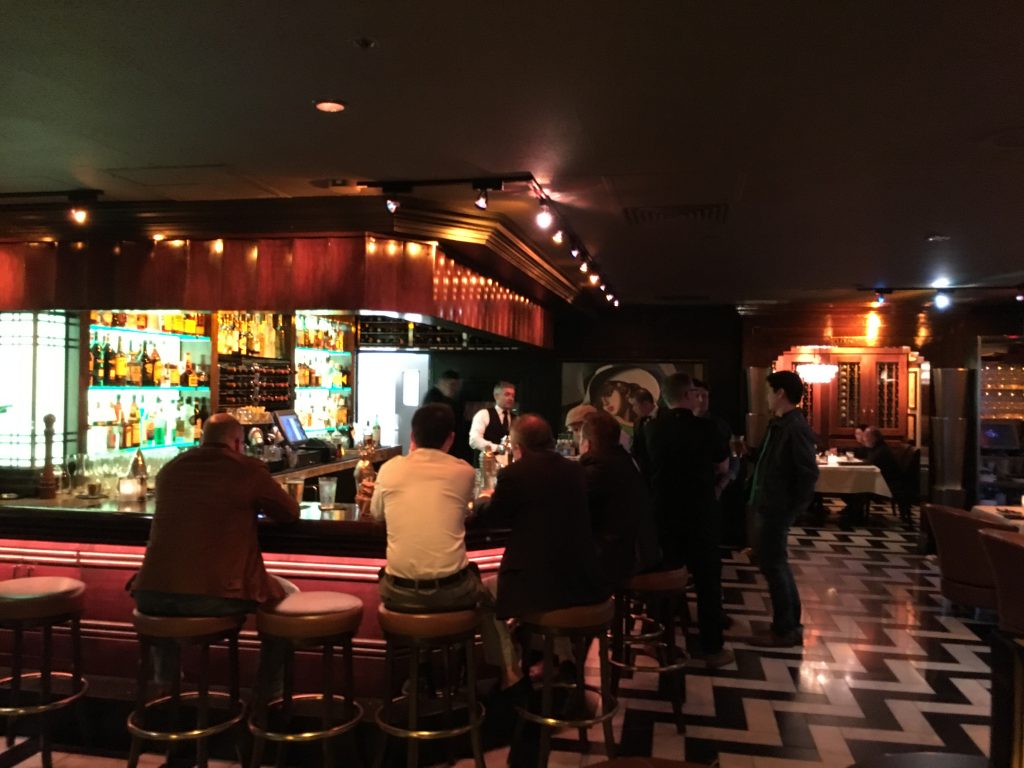 The next morning at 8am I gave my talk about “Stock Picks for the Next President” (you can read the you can see my notes for the speech, including some of the stock picks here) and a couple hours later I was notified by the MoneyShow app that I had another talk so I headed over to do a Live Q&A Chat for MoneyShow attendees.

Among the many questions I tried to answer after my talks or at the Live Q&A were: 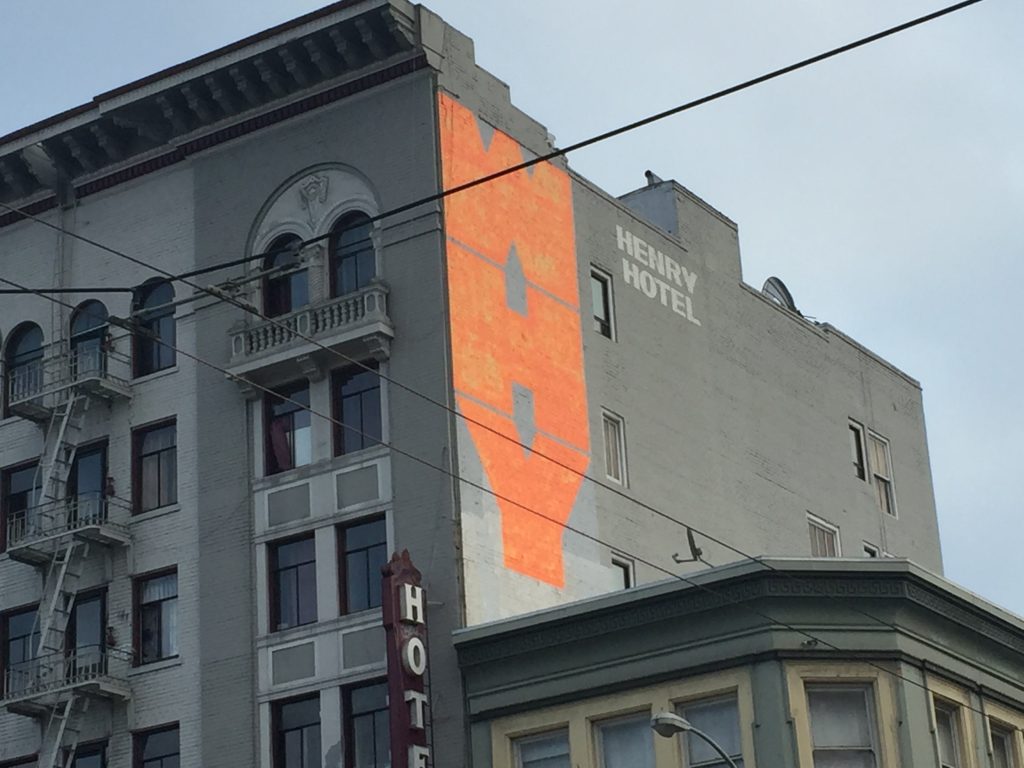 After my Q&A Chat, I was approached by a young woman who’d been at my talks and who wanted to talk some more about Revolutions, the future and…apps. Turns out she’s an app developer at a little company called Apple, Inc, maker of the iPhone.

Kheang, Jim and I then walked over to meet with an old friend of mine how heads up business development over at Disqus. Disqus powers the comments sections on over 4.5 million websites. 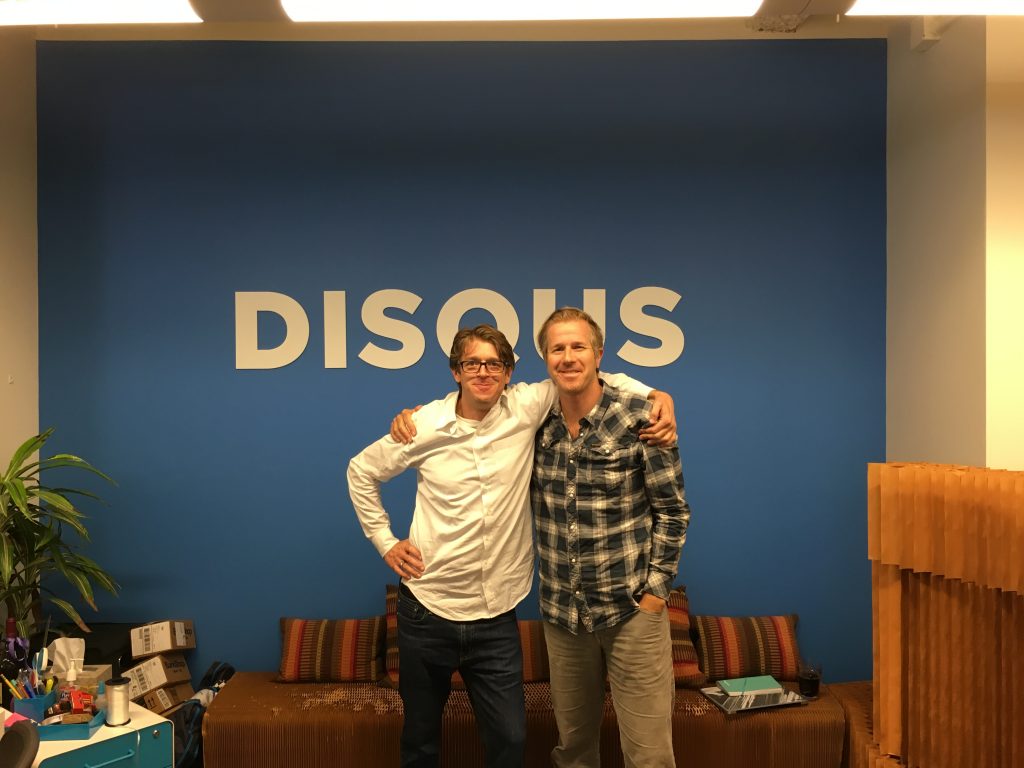 Three hours later, Kheang and I are have taken an Uber across the Golden Gate Bridge over to Sammy Hagar’s restaurant, El Paseo, in Mill Valley to meet my old friend, Bob Weir from the Grateful Dead, for dinner. Bob brought a very smart business partner/friend, Chris, along also. When I pulled out my smartphone to show them what the Headlne app itself looks like, the first article that appeared on the landing screen was about Ann Coulter and included her picture. Bob and his partner laughed because Ann is widely known as a Deadhead despite the fact she’s “conservative.” I happen to have Ann’s contact information, so Bob and I took a selfie and sent it to her. She wrote back “Nice photo!” 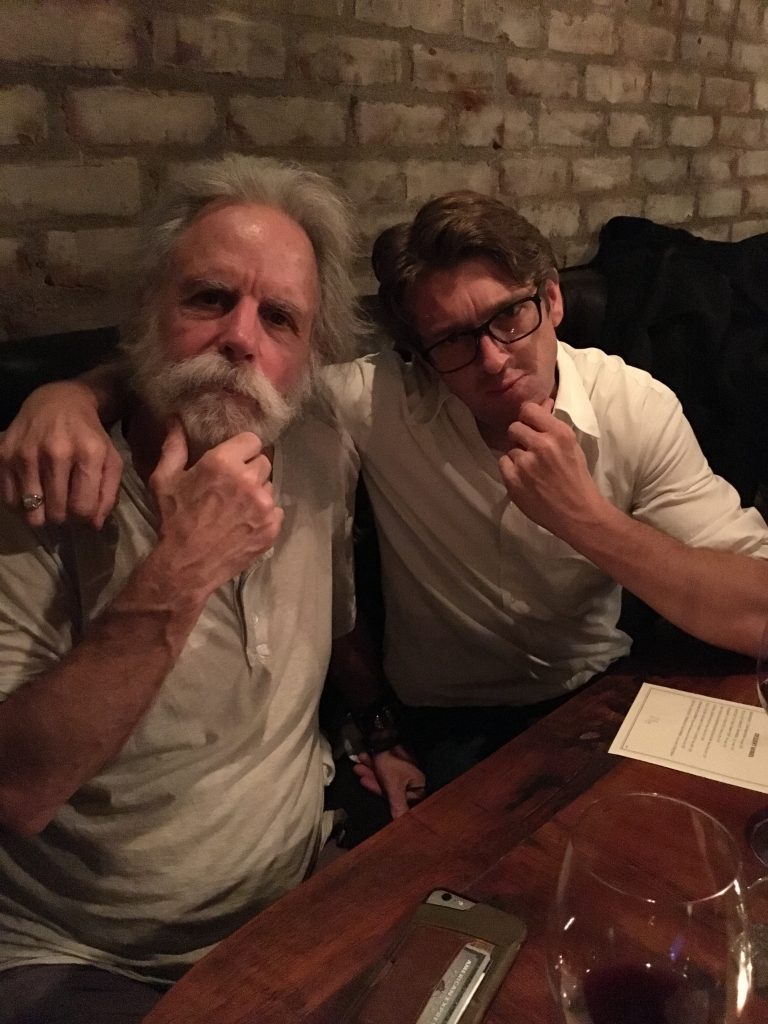 After dinner, Bob and Chris walked Kheang and I over to the Sweetwater Music Hall that they own. The band playing on stage was terrific and after their set, I met the lead singer, Essence. 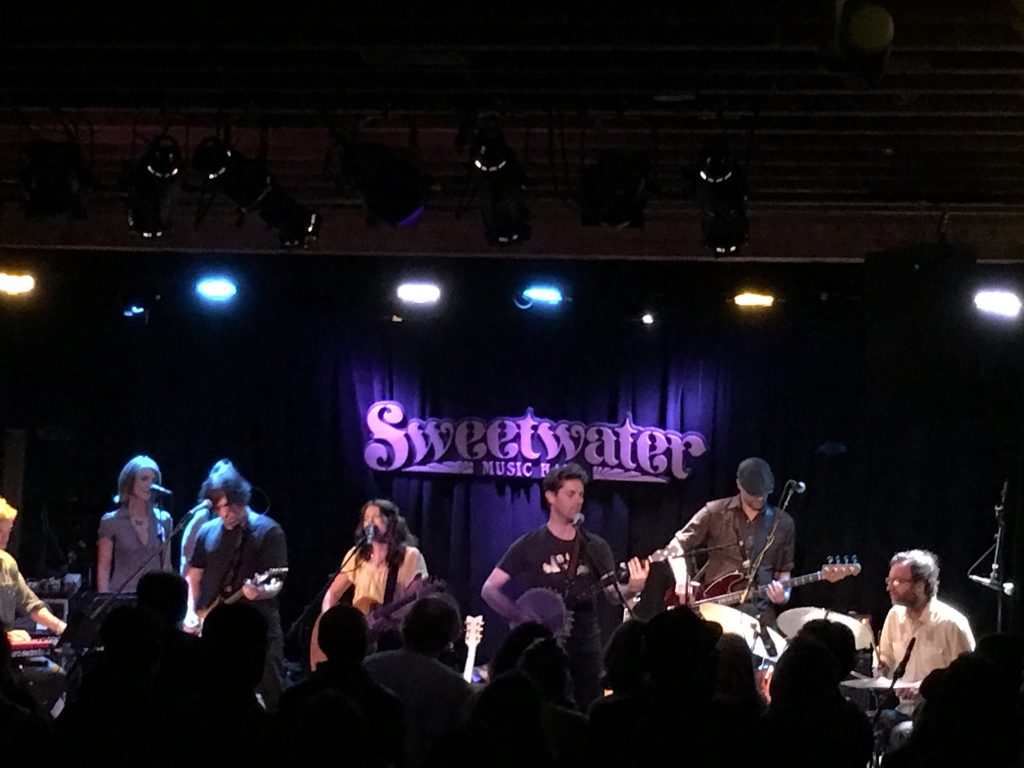 The next morning, I had coffee with Phil and his son again. I then spent an hour with an old intern of mine, Jay, who now works at a company called Fanatics that sells licensed jerseys of all sorts — over an app. He walked me over to an amazing coffee shop called Philz that enables its customers to order their coffee by an app for pick up at the front. I met back up with David from Disqus for coffee there where we talked personal lives, family and the future of media (apps, anyone?)

I ran back to the hotel where I packed my bags. Kheang and I stopped off at the Market and had the most delicious (because it’s so fresh!) fish and chips and hustled to the airport together. 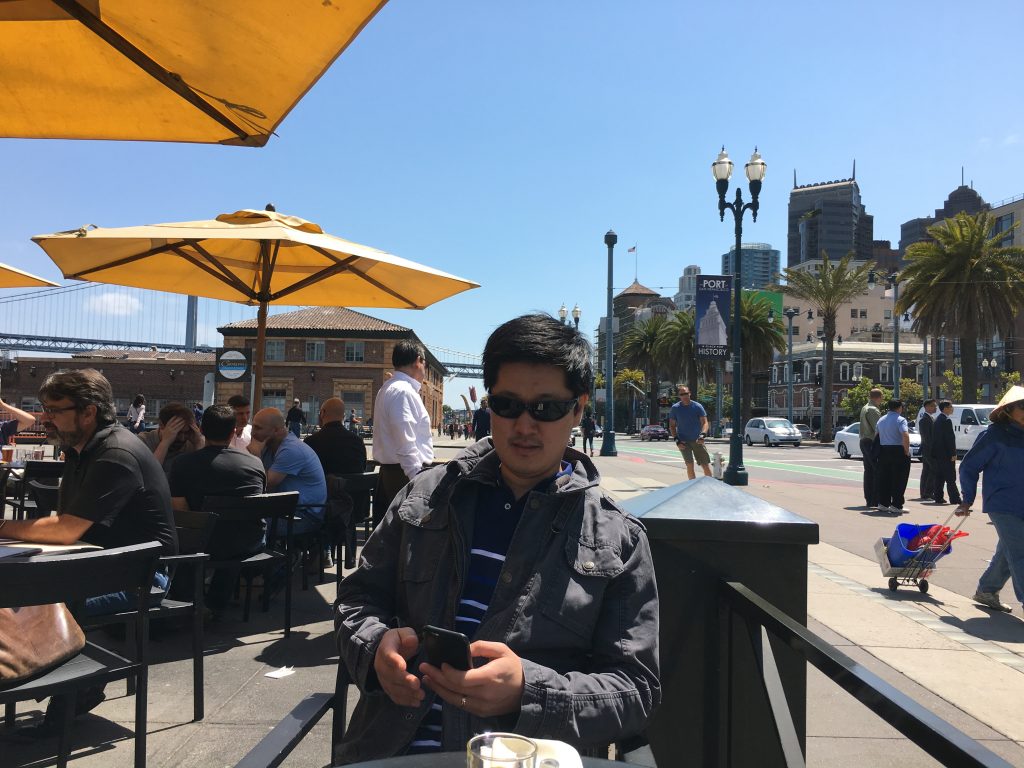 Markets and playbook and what's next
The Great Cryptocurrency Poll
Save 40% on your TradingWithCody subscription
In search of safe high-yield and diversification: Picks and allocations for retirees
Chicken Little Fed