A friend of mine who used to be one of the producers of my Happy Hour show on Fox Business reminded me of these old clips on YouTube. In the first one, I talk about how we would likely head into another tech stock market bubble in years ahead if the Fed and the Republican Democrat Regime wouldn’t let the economy ever go into a simple recession to wash out excesses in the economy.

In this second clip I hit on that same theme but also talk about why you have to own Google the stock for the next ten years.

When I left TV and got back into investing six years ago, I positioned myself and my money to benefit from that aforementioned tech stock market bubble by loading up on App Revolution stocks, including the also aforementioned Google. Google was one of my top 3 biggest positions and it remains one of my top 3 biggest positions to this day. Here’s what I wrote about it back in May 2011 when I was buying it aggressively:

“Google’s got $37 billion in cash. That’s about $57 per share in net cash. The Street consensus estimates that Google will earn about $16 a share in 2011 rising almost 20% to $19 a share in 2012. More realistically, even if the economy remains in its fragile state or even if it weakens, in my opinion Google’s going to earn at least $35 a share this year and over $40 a share next year. And unlike the Hewlett-Packards of the world, Google’s actually hiring and expanding, not just finding new ways to expand margins, as the top-line should grow close to 20% this year and next, or 10 times faster than the broader economy.

Finally and most importantly in regards to Google here is that over the next five to 10 years, the company will be displaying trillions of ads daily in front of hundreds of millions if not billions of Android/Chrome/GoogleNet users every month. The core search and content distribution businesses like YouTube will continue to grow for many years too. Google’s got big upside 10 years out that few analysts realize.

Stick with Google.  I am, just as I have since I first bought and highlighted Google for readers at $90 the day it came public.”

Okay, Cody back in real-time here in October 2016. And Google’s up 3-fold since I wrote that stuff above. 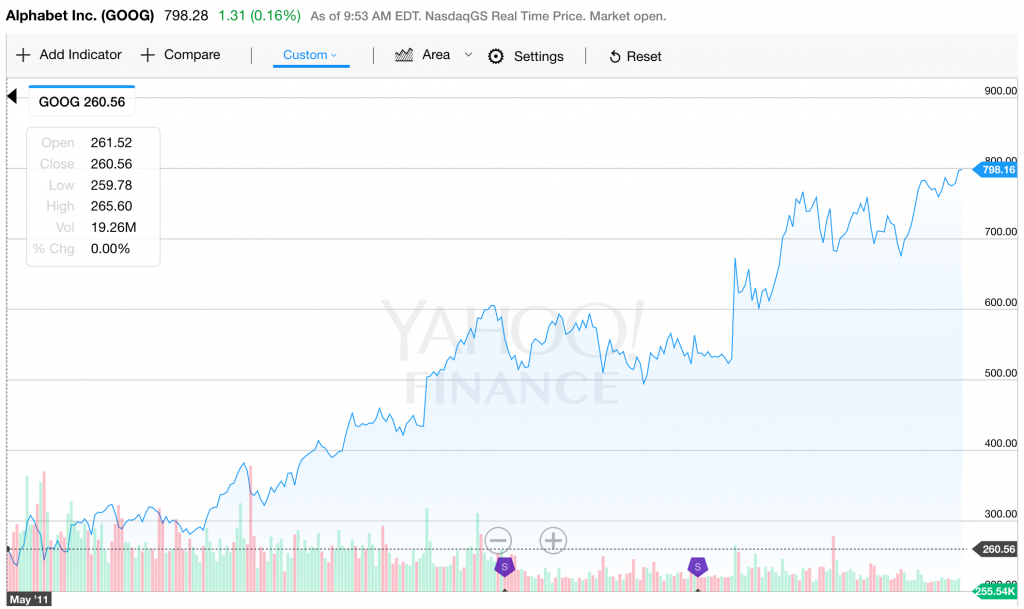 It’s been a secular grower just like I’d explained in that clip in 2007 as I said you have to own it for the next ten years. And it’s been nine years since we filmed that clip! Everybody loves Google right now, the stock has been on a tear for months, nay for years…and the hardest trade to make right now is to trim some of this sucker while it’s at all-time highs.

That’s exactly what I’m going to do. I’m going to sell about 1/8th of my Google position, which still leaves it as a top 3 largest position but allows me to lock in some of these long-term gains and continue to be disciplined and able to trade around our core.

A little bit of lift this morning in the...
TradingWithCody.com subscribers get all my latest investment books for free
Apple, Softee and Sony anecdotes from Century City
Apollo Group looks ready to crack and lots of must-reads for today
Your answers so far